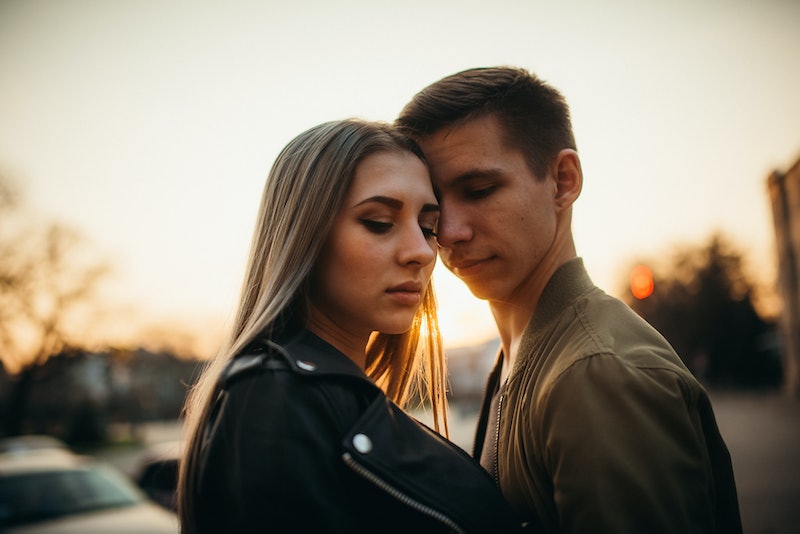 There's an episode of Gilmore Girls where Rory, years into her relationship with Logan, develops a crush on her substitute professor. She is smitten while feeling simultaneously ridden with guilt. As soon as she sees Logan she confesses to having a crush outside the relationship. He explains that unless she's going to act on it, it doesn't matter at all. Developing a crush while in a relationship can be completely harmless. The important thing is to step back and think about what it means.

"The first point is to distinguish between lust and love," Dawn Maslar, author of Men Chase, Women Choose, tells Bustle. "Lust is a temporary transient state brought on by the release of norepinephrine, a fight or flight response. The thing about lust is that you can have it for one person even when you are in love with another. Love on the other hand is a distinct neurological state. Long-term love shows activity in the prefrontal cortex, the more evolved thinking part of the brain. Because lust comes from the more primitive part of the brain it has the power to temporarily disrupt love. However, when a person becomes more conscious, or more thinking. The love usually returns while the lust dissipates."

While figuring out what you are really feeling, try not to be too hard on yourself as you are far from alone. YouGovUS recently surveyed 1,115 Americans and discovered that, at some point in their life, 36 percent of them had been dating someone while lusting after someone else.

"Developing a crush for someone else while you're in a relationship is natural," Anita A. Chlipala, LMFT, and author of First Comes Us: The Busy Couple's Guide to Lasting Love tells Bustle. "People get into trouble when they place more significance on the feelings than are warranted. They might think this new person is "The One" because they feel such intensity for him or her, and they don't feel the same for their current partner. Over time, they can look at their partner more negatively while looking at this other person more positively. These expectations are unrealistic."

While you might feel over come with lust for this new person, in the moment, it's important tho remember that it most likely won't last. "On average, infatuation fades between 12-18 months of being with someone, and so it would be unfair to compare the feelings of someone new to those you have with your partner," Chilpala says.

If you've decided that your infatuation isn't going to go away immediately, it's important to figure out what it means moving forward. Here's what experts suggest doing when you develop a crush while in a relationship.

1. Talk To Someone You Can Trust

If you have someone who is familiar with your relationship and going to be straightforward with you, that's the person you want to talk to. "This is someone who will support your relationship, and not someone who will tell you to follow your feelings or believes in the Hollywood version of love," Chlipala says. "Feelings are not always the best indicator of which action to take. Also, secrecy and having a barrier between you and someone you have a crush on can also intensify your feelings. Telling a friend pops the “bubble of secrecy” that you have created between you and this person. It can help bring the situation into a more realistic versus fantasy light."

2. Decide If It's Normal Or A Sign Of Something More

There are two types of crushes: Crushes that fade out and crushes you act on. The most important thing you can do is decide what kind of crush you're feeling. "It's completely normal to be attracted to people other than the person you're with," Joanne Davila, PhD tells Bustle. "It happens all the time and usually doesn't mean anything about the relationship you're in."

But, what if this isn't just a fleeting thought and the feelings you have are real? "If it's more than just attraction, like you can't stop thinking about the other person and you're really wishing you could be with them, then you need to examine what's going on for you and in your relationship. Are you unhappy with your partner? Are there problems in the relationship? If so, then your crush on someone else might be a sign that you're not in the right relationship," Davila says.

Maybe your crush isn't on someone new, but on an ex. While it's possible that feelings from a past relationship still remain, its more likely that you are using your ex as a comparison for your current partner. "If you’re in a relationship but thinking of your ex, you might be avoidantly attached," says Chlipala. "Avoidantly attached people have a tendency of fantasizing about a “Phantom Ex.” They view their past relationship as better than it actually was while finding fault with their current partner."

4. Think About Your Relationship

If you are tempted to act on your feelings, the most important thing you can do is put yourself in your partners shoes and imagine how it would make them feel. Getting this perspective will allow you to think clearer.

If you don't know where to start, try to place yourself in that reality and see what feelings and thoughts arise. "This doesn't mean just saying, 'I would leave you,'" says Chlipala. "It means being detailed and saying, 'It would shatter my world. I wouldn't know who you are anymore. I wouldn't want to touch you because just looking at you would make my skin crawl."

5. Be Communicative With Your Partner

"I think most people, if they develop a crush, wouldn’t tell their partner," says Chlipala. "I recommend that you do. You don’t want to do it in a hurtful way, but if you start developing feelings for someone else, you can say something like, 'I don’t know what it is about this person but for some reason I’m drawn to them,' or 'I’ve been noticing that I really look forward to seeing this person and it makes my day when I talk to them.' I get that this is scary and most people won’t do it. But I hope one day couples can have conversations like these."

The key here is that the two of you have an open and calm conversation, if you can't listen to each other then nothing will be resolved. "The receiving partner cannot lose their sh*t though," Chlipala says. "If you want honest communication, both parties are responsible for creating the conditions where the other can be open without retribution. Being transparent with each other helps with the number one point where it pops the secrecy that can help fuel passion."

Awkward conversations are something we try to avoid at all costs, but sometimes they're just necessary. This is one of those times. Find a way to express how you're feeling and get talking.

If you're finding yourself crushing on someone else, try not to get freaked out. Determine what it means and what, if anything, you should do. Just because you felt something for someone else doesn't mean anything is wrong with your relationship, remember, it's common and totally natural.

More like this
Is It A Rebound Relationship Or The Real Thing?
By Carolyn Steber and Lexi Inks
Are Quality Time & Physical Touch Love Languages Compatible?
By Lexi Inks
Cookie Jarring Is The Dating Term You Need To Know
By Sophie McEvoy
12 Ways You're Sabotaging Your Love Life
By Teresa Newsome and Lexi Inks
Get Even More From Bustle — Sign Up For The Newsletter