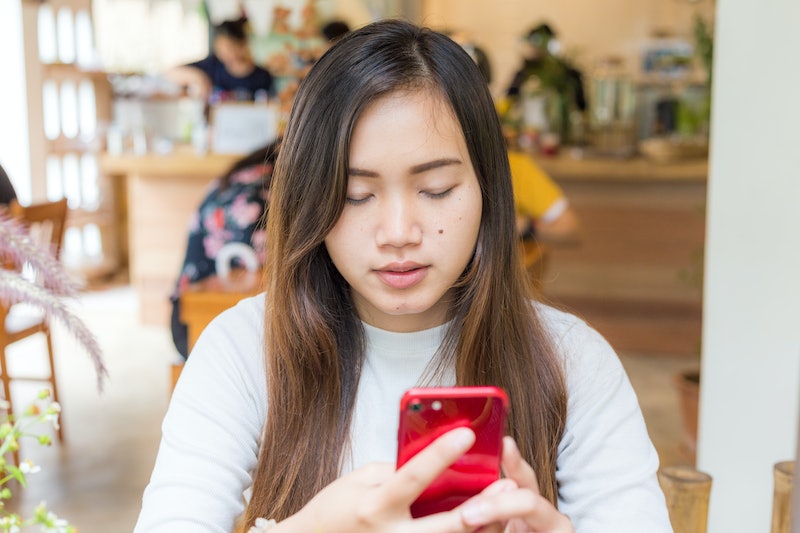 Whether it's ongoing text messages, middle-of-the-night calls, requests to meet up for coffee — or all of the above — it can be difficult to know what to do when your ex won't let you go. These actions make it clear they're holding out hope for a relationship of some kind. But if you've officially moved on, it's OK to wish they'd do the same.

Of course, it can get even trickier if they're really struggling with the breakup and have been trying to win you back. In this situation, your ex might promise that they'll change, beg you to reconsider, or make grand attempts to fix things. And while it's up to you to decide how you'd like to proceed, it's also OK to admit that you aren't interested, and that getting back together isn't going to be an option.

So what can you do when your ex isn't taking the hint, or seems to be having a tough time letting go? Start by making sure there aren't any mixed messages floating around. "Mixed messages are where your desire (breaking up) is confused by your partner with actions that look like you still want a relationship," Caroline Madden, PhD, a licensed marriage and family therapist and author, tells Bustle.

Mixed messages can give your ex false hope and that will, in turn, keep them coming back for one last try. Think along the lines of answering those phone calls, texting back, or agreeing to meet up for coffee, even though you don't really want to. On your ex's side, these seemingly innocent actions can be mistaken for interest.

The same is true if you're quite literally sending mixed messages. "Often the breaker-upper doesn’t want to be the bad guy and so tries to soften the blow with statements like, "You’re a great person, I’m just messed up right now," or “Let’s be friends," Madden says. While it feels less harsh in the moment, statements like these ultimately do more harm than good and should only be said if you really mean it.

In general, the best course of action is to have no contact, Chris Seiter, a relationship specialist and breakup consultant, tells Bustle. This will give you both time to move past negativity, Seiter says, like the anger or hurt feelings that typically occur after a breakup. By giving your ex some space, they'll have a better shot at clearing their head, and maybe even moving on.

You might even want to tell them about your plan so that they're fully on the same page. Send them a text or give them a call, and "admit that you have been giving mixed messages and that you are going to stop doing that," Madden says. "Suggest that you [...] mutually agree to unfollow/block each other from social media. Say that you will not be contacting them or returning their texts/calls." And from there, try not to let any guilt get in the way.

"It is important to be true to yourself and stick with your feelings," Seiter says. "It can be difficult to move on but you have to learn how to be confident in your decision." Waffling back and forth will lead to a stressful and upsetting cycle of false hope, while sticking with firm boundaries will send a clear message that the relationship is over.

"Tell them that you are setting a boundary and you need and expect your boundary to be respected," Heather Hans, LCSW, MBA, a psychotherapist and author, tells Bustle. "This is important because you want to be very clear, avoid sending mixed messages, and because your space and physical/emotional safety is of utmost importance."

It can be difficult to cut ties with an ex, especially if they are hurting or having a tough time letting you go. But by following these tips, you'll be sending a clearer message, and making it easier for you both to move on.