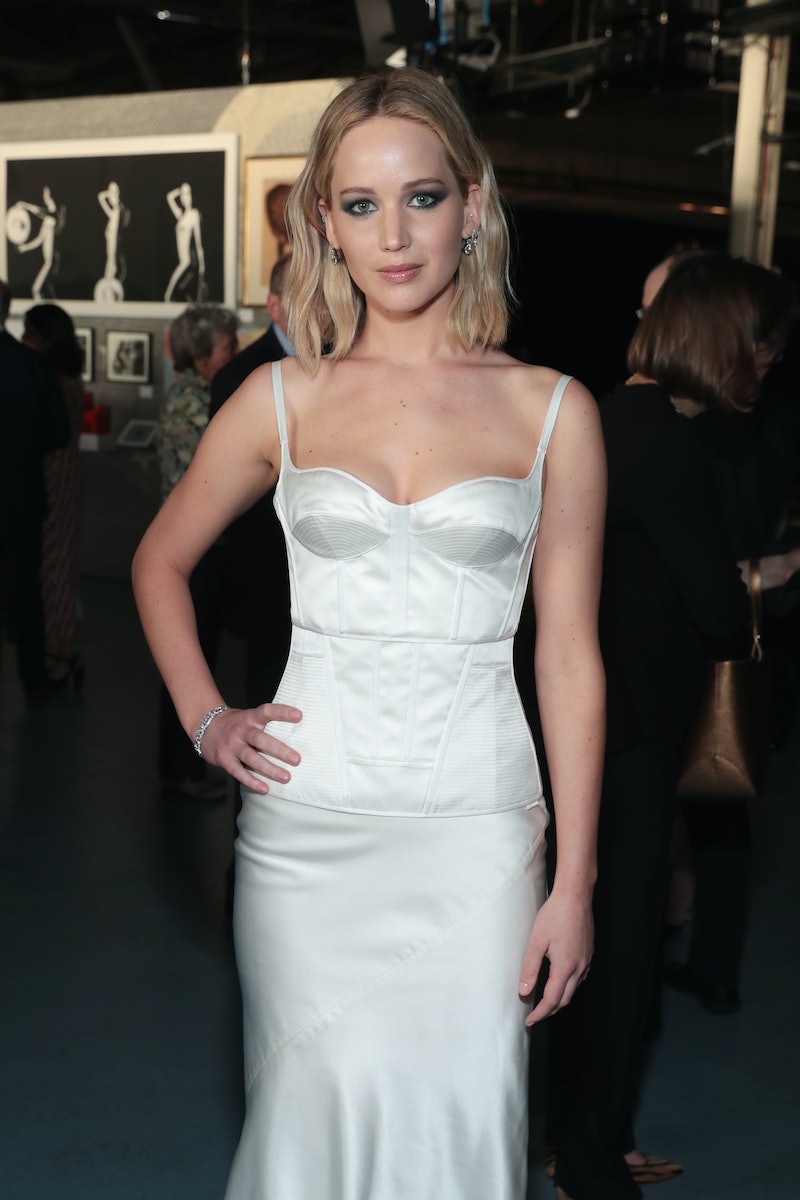 She's shot arrows, transformed into a mutant, and even won an Academy Award —but 2019 may hold Jennifer Lawrence's biggest life event yet. The Dark Phoenix actor is engaged to art gallery director Cooke Maroney and celebrated earlier this month with a low-key engagement party. So, naturally, people are asking: when is J. Law getting married? Several signs point to a wedding date that is sooner than you think. The Oscar winner had an engagement party in May and it could prove the first step toward the aisle for the private pair.

Rumors of a relationship for Lawrence and Maroney, who is the director of the NYC art gallery Gladstone 64, the East 64th location of the Gladstone Gallery, per the gallery's website, began in June 2018. By February 5, 2019, the New York Post's Page Six reported that Lawrence was spotted dining with her new fiancé — and an eye-catching engagement ring at Raoul's in New York City.

Before and during the engagement, Lawrence and Maroney's romance has been kept mostly private. Compared to some of the star's relationships with high-profile performers including Nicholas Hoult and Chris Martin, little as known about J. Law's future husband. However, fans did get their first taste of wedding planning for the couple on May 12, when E! reported that the pair were having an engagement party.

Lawrence prepped for her bride-to-be status by actually wearing a wedding dress to her engagement party. E! reported that the event was a backyard occasion, "as if they were going to a party at someone's apartment." But that didn't stop the Silver Linings Playbook lead from turning it out when it came to the fashion for the event. Lawrence sported a pink, silk chiffon Juliana gown from L. Wells Bridal's Spring 2019 collection and a classic updo.

The world got a peek at Lawrence's look courtesy of her two stylists, Jill Lincoln and Jordan Johnson. They posted a photo from the evening, captioned, "Here she comes! We couldn’t be happier and more excited for #jenniferlawrence to become a #MRS.. this weekend we toasted Jen and her groom to be.. too good of a time was had by all."

Following the typical timeline of the lead-up to a wedding, an engagement party comes in between the proposal and the kick-off to choosing everything from a cake to a dress. While the couple may not have taken the Jax and Brittany of Vanderpump Rules route with a lavish engagement celebration (mashed potato bar, anyone?), sources say the wedding itself will be family-oriented.

A family source told People in April that Lawrence is a "family girl." The insider added, "I would be surprised if the wedding were not a fairly extensive family affair." But while the "American Hustle" actor is from Kentucky and Maroney's family owns a farm in Vermont, per People, the couple's home base of NYC could be the ideal ceremony spot. People also reported that Lawrence and Maroney toured two luxury hotels in the city in early April for possible venues.

For now, Lawrence can unwind from wedding planning by, say, nonchalantly hitting the town with Adele or attending the premiere of her latest X-Men movie, Dark Phoenix, which is out June 7. If 2019 is the year of J. Law's nuptials, she'll need plenty of relaxation in the meantime.