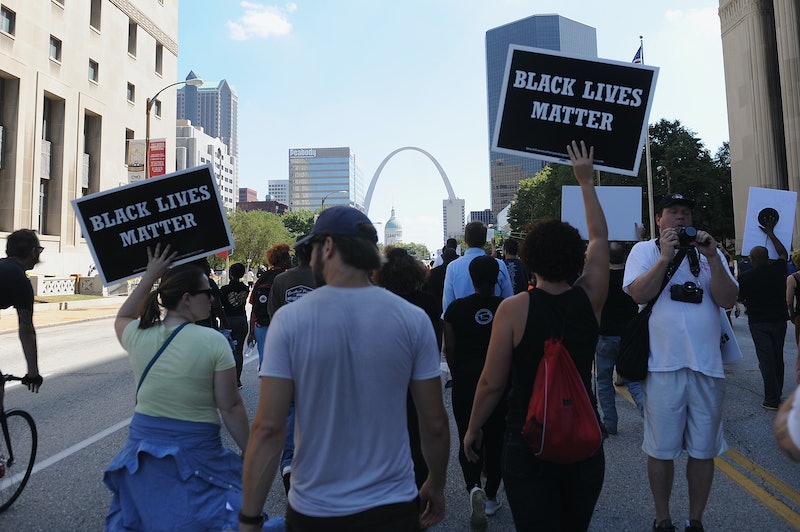 While feminism has traditionally been defined as a movement for gender equality, it's absolutely vital that it also address racism — and a new study on how women respond to black and white women at risk for sexual assault illustrates why. The white women studied were less likely to intervene in the potential assault of a black woman than they were of a white woman, which shows that black women face even more risk for this form of gender-based violence. The findings also prove we have a long way to go before white feminists embrace intersectionality in their actions as much as they often do in their words.

For the study, published in The Psychology Of Women Quarterly, SUNY Geneseo researchers had 160 white female college students read a story about "attending a party where they saw a man lead an intoxicated woman into a private bedroom." There were two versions of the story, with one key detail varying by version: The name of the woman. Some participants read about a potential sexual assault victim named "Laura," while others read about "LaToya." Although the participants recognized that both women were at risk, those who read about "LaToya" reported less willingness to help.

"The current results suggest that white women in college may choose not to help black women at risk for sexual assault," the authors conclude. "Bystander education programs should explicitly address race as a potential barrier to helping others in need."

Underlining how significant the results of this study are is another recent study from the University of Kentucky, which found that bystander intervention works. In this research, high schools whose students were trained in bystander intervention reported 12 percent fewer sexual assaults than those that didn't after three years. But it appears that not all students benefit from such training equally.

The SUNY Geneseo study's authors, Jennifer Katz and Christine Merrilees, explained to PsyPost that their findings are especially important given that most U.S. colleges are predominantly white. If the majority of people on campus are unlikely to help someone, their chances of getting help look bleak.

But the implications of the study extend beyond this one issue. They show that even when it comes to sexual violence, one of the biggest feminist issues of our time, women aren't always willing to support other women. And the women they're not willing to support are the ones who need it most.

Black women face both higher rates of sexual assault and less sympathy as victims — a phenomenon which may have something to do with the "jezebel" stereotype that has been so pervasive for so long — and white women's unwillingness to help them could very well reflect this phenomenon. “If a black man rapes a white woman, it’s wrong because white is pure,” Morgan State University student Imani Lewis told the City Paper. “But as a black woman, if I get raped it’s because I deserved it.”

These results also illustrate why White Feminism is such a problem. Many white feminists attended the Women's March, but have never attended a Black Lives Matter protest. White feminist artists like Lily Allen will complain about sexual objectification all while objectifying women of color. And this study suggests that many white feminists will stand up for those vulnerable to sexual assault on the condition that they're white.

Everyone is subject to implicit bias, and we don't do feminism any favors by saying "not all white people." Rather than claiming "color blindness," we need to accept that this is an issue. It's only by noticing it that we can consciously correct for our own subconscious racism.