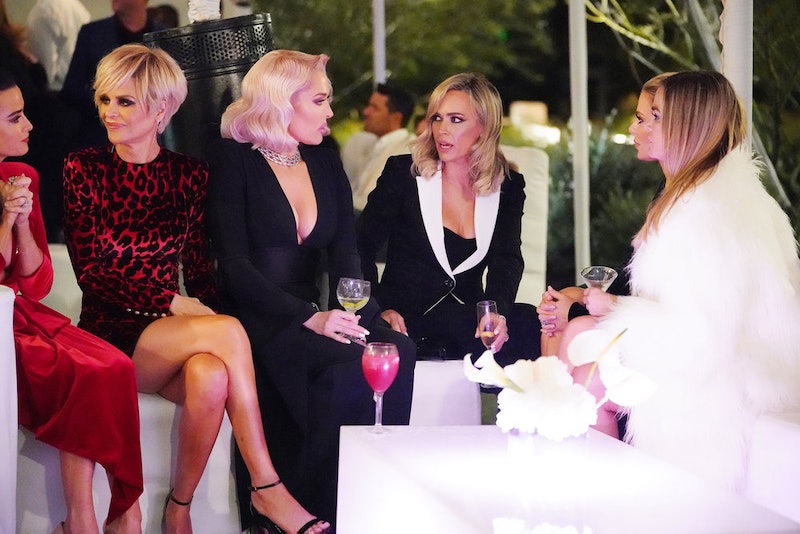 If this season of Real Housewives Of Beverly Hills has shown viewers anything, it's how perilous and tenuous some of the cast structures have been. To have Lisa Vanderpump separate from her group because she was merely called out over the storyline of a dog (more on that later) shows that sometimes, these casts may be better off apart. And speaking of apart — who actually showed up to the Real Housewives Of Beverly Hills Season 9 reunion? Some of your faves were certainly missing from the couch.

So, the crux of the season's drama started with a dumb dog named Lucy Lucy Apple Juice. OK, so the dog isn't dumb, but the story was. Reportedly, Dorit adopted a dog from Vanderpump Dogs (allegedly coming soon to a spinoff near you) and when the dog didn't work out, she gave it to someone else and not back to Vanderpump. Then, Lisa Vanderpump reportedly clued Teddi in on the story for the season and asked Teddi if she wanted to take Dorit, whom Teddi doesn't get along with, down with it.

Teddi balked and revealed that Lisa Vanderpump is probably pulling more strings with producers than we thought, and instead of admitting she had something to do with this story (and many, many others), Lisa took a weird lie detector test and then stopped filming. For good. The end.

So, if LVP didn't attend the reunion, who did? Let's take a look.

Kyle is a definite yes, as Bravo confirmed her presence and, per OK!, she 'grammed up a storm before, during, and after the reunion. It was the longest they'd ever filmed, she said, which had to be especially brutal with all the screaming and everyone's hair back so tight.

In a special video from Bravo, Dorit showed off her special barrette-laden hairdo, so she is in with bells on. Well, barrettes. Hopefully, there are no more puppies.

Erika lives for a lewk, so do you think she would miss this opportunity? Nope! Per Bravo, she sat between Denise Richards and Lisa Rinna, so that must have been the party couch.

Please. You know Lisa wouldn't miss a reunion. She and Erika are going to take everyone else to task.

Camille, now a "friend of" on the series, definitely showed up to reunion because, according to Hollywood Life, Camille got raked over the coals by the women during taping. She then went on a Twitter rant to condemn all the ladies. Guess we'll just have to see how it goes when it airs.

Bravo announced that the RHOBH rookie is seated next to Erika, which is a safe place to be — Denise kept out of the drama as best she could this season, so she doesn't need to be in the middle of it.

Following a season where Lisa insisted that she was being bullied by the other women, Lisa opted out of the reunion, Season 10, and everything else having to do with Real Housewives Of Beverly Hills. See ya, sister. Andy Cohen said he wished she showed so that she could have told her side of the story, because ratings.

Teddi is on the other side of the couch with Kyle, according to Bravo, and that makes sense — these new BFFs are going to be batting for each other the whole time they're filming.

Brandi had herself a time this season hanging out with Denise, so there's a chance she has a reunion moment. No confirmation, though, but it's a guess that she would pop in and out for a segment and that's that.

There you have — that's who will sit alongside Andy Cohen to read each other to filth. Don't forget to get your popcorn ready.