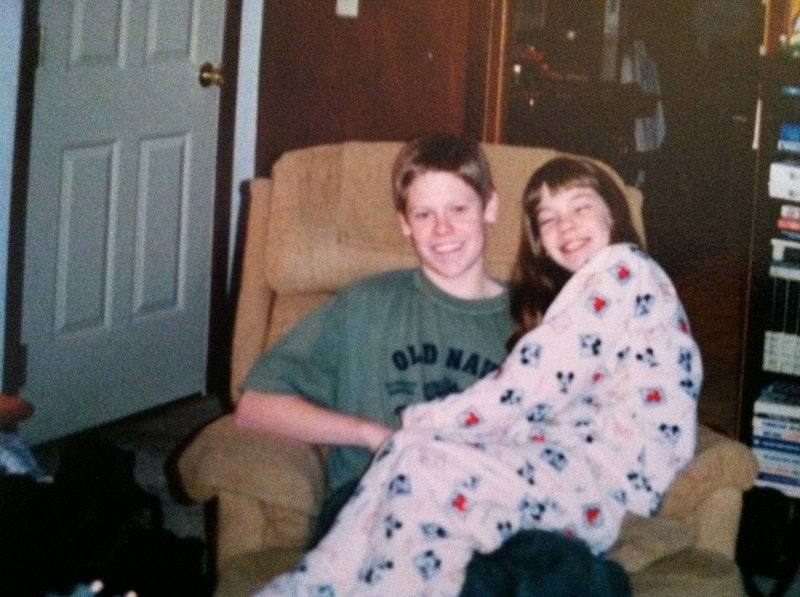 Although many Disney/Pixar movies deal with death, Up is different, requiring an entire box of tissues, if not more. Following an old man named Carl dealing with the loss of his beloved wife Ellie, the film has humor and adventure, yes, but it's mostly a story about loss and recovery. 10 years after its May 2009 release, the way Up portrays the grieving process still feels spot-on — so much so that I wish the movie had been around when I was a 13-year-old girl grieving the death of my older brother.

In 1999, my 16-year-old brother, Ryan, was killed in a car accident. It was the hardest day of my life, and even though it's been almost 20 years since his death, the pain hasn't disappeared. As a teenager, I felt alone; although my parents worked hard to ensure my childhood remained intact after Ryan died, there weren't many people my age who knew what I was going through except for one friend who sadly lost both her brother and sister.

With so few people in my life able to help and listen as I processed my complicated emotions, I could've really used a movie like Up that showed grief as a many-layered thing. At the time, I didn't know if my emotions were "normal." I felt like I'd been beaten up, but there weren't any physical bruises, and while sometimes I felt fine, other times I felt like I had been run over by a car. Through Carl's eyes, though, I would've realized that it was not just OK to feel this range of emotions, but healthy.

Far too often, people dealing with tragedy are told to keep their emotions bottled inside and not let on the extent of their grief. Up, though, shows how important is to mourn, to express yourself, and to move on at your own speed — not anyone else's — after losing a loved one. The first, gut-wrenching sequence in Up captured my grief experience perfectly. In the span of 10 minutes, Carl and Ellie's entire journey together is shown, each moment speeding by, culminating in her death. For me, that's how losing Ryan was — sudden and wrenching, changing my life completely in the blink of an eye.

Seeing loss and grief portrayed so realistically on-screen is a comfort, and I know I'm not the only one who feels this way. After Celine Dion's husband, Rene Angelil, and brother, Daniel Dion, died only days apart in January 2016, the singer revealed that Up helped her explain death to her young children. "Up saved my life," Dion told Yahoo News (via Entertainment Tonight) in September 2016. "I said, 'What is the movie that Ellie died in?' And they said, 'Ellie died in the movie Up, mom.' I said, 'That's it. Ellie,' I said. 'Well, I want you to know listen to me.' I said, 'Papa is now with Ellie.'"

Up is certainly a great tool for kids and teens dealing with grief, but people of all ages can relate to it. The movie can teach everyone about loss and healing, at all stages of the process. 20 years after my brother's death, there are people who try to tell me that grief shouldn't still be a part of my life. Similarly, in Up, a mourning Carl gets told over and over what people think is best for him — until he finally takes matters into his own hands and escapes.

To this day, Up makes me feel less alone. As I watch Carl slowly move forward with his life and realize adventure is still out there even without Ellie by his side, but that it doesn't mean he'll ever forget his one true love, I feel seen. I'm 33 years old now with a whole new life for myself, but that doesn't mean Ryan isn't constantly in my heart and in my mind, or that I'm not still coping with his loss. As the character Claire Bennigan from ABC's The Whispers once said, "Then my mom, she said that grief is a suitcase that sits at the bottom of your bed, and no matter what, without failure, you have to pick it up every day, take it with you. Some days it will be filed with rocks, and you don't think you can carry it, and then other days, light as a feather."

Even though Up wasn't around when I was a 13-year-old missing my brother, I'm so glad I have the movie today. Whenever I watch it, I once again realize that it's OK to grieve whenever I want, however I want, and for how long I want. It's a truly special movie, and it's one that will forever help me, no matter how old I am or where I'm at in my grieving process.