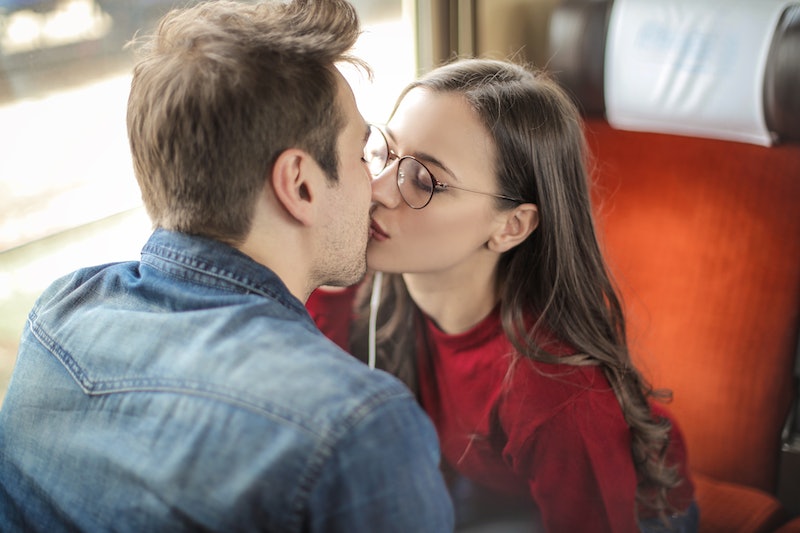 If you were to walk up to a random stranger and ask how they feel about cheating, chances are they'd say it's not OK. In fact, 90 percent of people believe infidelity is unacceptable, and acknowledge the negative impact it can have on a relationship. And yet up to 40 percent of folks do it anyway.

Clearly, the math doesn't add up. Why might someone go behind their partner's back, even though they agree it's wrong? "For some people, they appreciate the extra attention," Dr. Christopher Ryan Jones, PsyD, a clinical psychologist and sex therapist, tells Bustle. "This doesn’t mean that their partner at home is not giving them attention, though that is sometimes the case. But for some people they need validation from others."

They might seek out another person's time or attention — or even look for a hookup — as a way of feeling connected and seen. "This could be due to an improper view of self, low self-esteem, or self worth, etc.," Jones says. "By cheating, they receive the validation they need and feel better about themselves."

Other folks don't set out with the goal of cheating, but instead see it happening little by little, especially if their needs aren't being met. "Perhaps they’ve tried to communicate these needs with their partner but don’t feel heard or understood and, over time, and over multiple seemingly insignificant events, they start to fantasize about [meeting] certain needs (sexual and/or emotional) outside of the relationship," Jaclyn Lopez Witmer, a licensed clinical psychologist at Therapy Group of NYC, tells Bustle.

This might mean flirting with a friend or being way too open with a coworker, and building an affair from there. "Perhaps an opportunity presents itself for a connection with someone else and, as the expression goes, one thing leads to another," Lopez Witmer says. "This might start with ‘emotional cheating,’ [or] sharing intimate moments or vulnerable feelings with someone who is not their partner."

Because it isn't happening all in one fell swoop, it's easier to get used to what's going on, and later justify it to themselves. "There’s the moral piece to that, and also factors at play like length of time in relationship with [their] primary partner, quality of relationship, how one defines 'cheating' (e.g., emotional, physical, only involving sexual contact, etc.), among others," Lopez Witmer says.

If they view their relationship as somehow flimsy or flawed, emotional cheating might not feel like a big deal — or it might even feel like it's somehow OK due to the circumstances. "Usually, before cheating occurs there’s a shift in how the cheating partner feels about their partner and the relationship, and they (consciously or unconsciously) choose to step away from their partner," Lopez Witmer says. "This usually happens first in their mind before any other person is involved."

Cheating in all its forms can also be used as a way to end relationships. So while someone might not endorse cheating, they might be OK with using it as a way to break things off with their partner. "For them, its easier to just find someone else," Jones says. "In this situation their partner breaks up with them, so they don’t have to do it, and they already have another relationship so they don’t have to be single." In such a win-win situation, cheating can be tempting.

While someone might agree that cheating is wrong, they could find themselves doing it anyway for all these reasons and more. But it's far less likely to happen if a couple is willing to talk it out. "This means expressing emotional needs and difficult emotions to your partner and also being open to hearing what your partner feels and needs in return that you may not be adequately providing," Lopez Witmer says.

And this is true even if it feels tough or uncomfortable. "Often we choose not to share how we are really feeling out of fear that we will hurt the other person or that it will become a big, intense argument," Lopez Witmer says. But the more often couples share these types of things, and support each other, the easier it becomes.

It can also help to chat about what constitutes cheating, "both emotional and physical," Anita A. Chlipala, LMFT, a licensed marriage and family therapist, tells Bustle. "It's a lot easier to cross a boundary when the boundary is blurred," she says. But if a couple agrees on what's OK and what isn't, and is willing to talk about how they're feeling and what they want on a regular basis, they'll both be way less likely to resort to cheating.