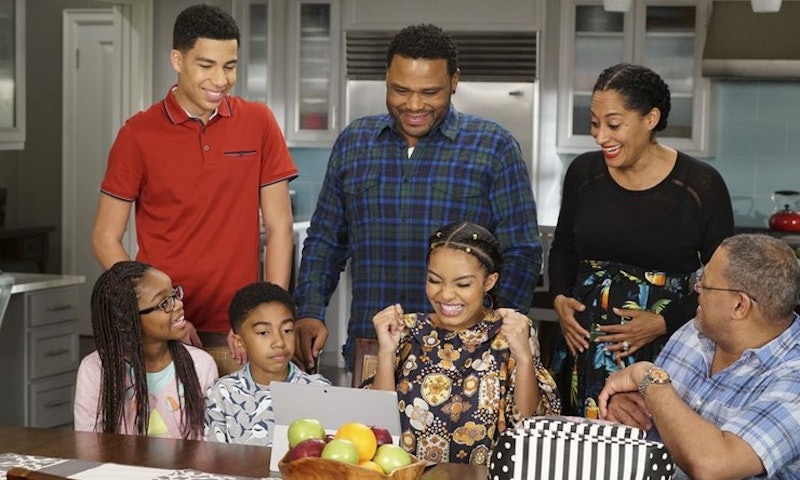 It sounds like Yara Shahidi's black-ish spin-off may air on Freefom, according to Entertainment Weekly, and I, for one, am super excited about this potential resting place. Moving to a cable network could mean the show will be allowed to tackle more real-life issues, instead of looking through the typically rose-colored lenses of a primetime network.

As someone who's spent way too much time on their alma mater's campus, I know that everything isn't always so peachy. I get it — it's a fictional story, crafted around fictional characters for families who enjoy wholesome, primetime television. But, black-ish is known for pushing the envelope, and covering the more controversial topics, like what Donald Trump's presidency means for people of color. So, why expect Shahidi's spin-off to do anything less?

When I think of Shahidi's character Zoey tackling college life, the realities that many young adults face while attending come to mind. And I'm not just talking binge-drinking and fraternity hazing. I'm thinking about date-rape, racism, depression, and even suicide. Zoey may be an upbeat and privileged teen from the Los Angeles County suburb of Sherman Oaks, but she's also a realist. You can bet she has an inkling that life outside of the confines of the Johnson family home isn't going to be comfortable.

Black-ish's "Liberal Arts" episode did a fine job of introducing us to the types of experiences that Zoey will have on her fictional campus. Written by the show's creator Kenya Barris and showrunner Larry Wilmore, the sneak peek centered around Zoey's attempt to put a stop to the university administrator's plan to integrate the racially segregated dorms. It totally had a bit of a Dear White People feel to it, but with a little more sugar, if you will.

It stayed true to its Black-ish roots — you know, pushing the envelope just enough — and was hilarious to watch. But, I can't help but imagine how the same storyline would've been like if the episode was hosted on Freeform instead. Could it have been any better? Maybe not. But there's a good chance that it would've been less "cute."

Just look at Pretty Little Liars, for example. Fans would argue that the show got a little bit edgier once its network made the transition to Freeform, shedding itself of the "ABC Family" label. And when looking at lineup newbies like Famous In Love, it's clearer than ever that the network is seeking much more free and explicit content to add to its roster.