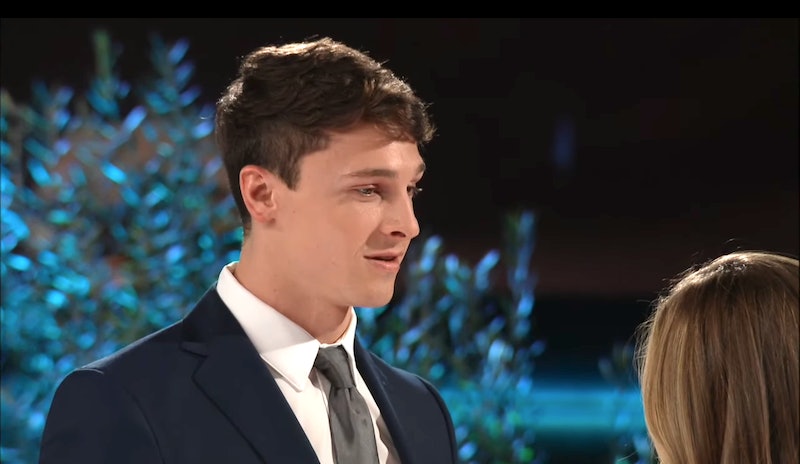 Connor S. provided comforting chicken soup when Hannah wasn't feeling well during their one-on-one date on The Bachelorette. But who needs hot soup when you can have steamy summer fun on the beaches of Mexico? Connor S. could be on Bachelor in Paradise if Hannah doesn't choose him on The Bachelorette, and that's starting to seem more and more likely. In the preview for Week 8, it looks like Connor might go home due to something Luke P. did. If that's the case, Connor is pretty much a perfect candidate for Paradise.

Hannah was really smitten with Connor when he left her little get-well love notes all around her place after she couldn't go on a standard one-on-one date with him because she was sick. But he hasn't gotten much screen time since then, so her connection to Connor clearly isn't as strong as with some of the other guys. However, Connor has been nothing but a gentleman on the show. He handled his disappointment of their date not going as planned really well and he has even managed to mostly stay out of the Luke drama... well, at least for now.

If he doesn't end up with Hannah, plenty of other women would be happy to date him. And what would be better than seeing him go on those dates in Paradise?

Now, of course, Connor might not want to go to Paradise. He's currently pursuing Hannah on The Bachelorette, so if he leaves on a bad note because of Luke or something else, he may not be interested in doing another Bachelor show surrounded by Bachelor alum. But Connor doesn't necessarily seem like one to hold grudges and he was one of the first contestants introduced on The Bachelorette, so he's obviously game to go all in for the reality franchise. Instead, another reason he may be disinterested is because he's already been spending his own time in Mexico.

On May 30, Connor posted a photo on Instagram of him swimming in a cenote in Tulum, Mexico, which is on an entirely different coast than the beach where BiP films. He also shared a pic on May 25 of him at a Mayan site. Bachelor in Paradise didn't start filming until some time in early June, so it's possible that Hannah sent him home and he went on a quick trip. It could also be from a previous vacation, since, according to his Instagram Stories, Connor was recently hanging out on Walloon Lake in Michigan.

Either way, it's entirely possible that he may be craving more Mexican sun before the summer is through — he would make a perfect mid-season arrival to the beach.

Connor's Instagram proves that he loves being by the water, so if Hannah doesn't give him a rose, he may want to go to Bachelor in Paradise just for the waves and the outdoor adventures. But the 24-year-old investment analyst would certainly experience some romance along the way with contestants like Hannah Godwin, Caelynn Miller-Keyes, Jane Averbukh, Onyeka Ehie, Nicole Lopez-Alvar, Sydney Lotuaco, and Katie Morton from Colton's season. Which means that even if we lose Connor on The Bachelorette, he could bring his even-tempered and sweet nature to Paradise.

More like this
Everything To Know About 'Bachelor' Host Jesse Palmer
By Justice Namaste and Radhika Menon
Here's Our Ranking Of The Funniest 'Bachelor' Casting Ad One-Liners So Far
By Grace Wehniainen
A First Impression Rose Didn’t Save Mario From Going Home On 'The Bachelorette'
By Kadin Burnett
Why Did Meatball Leave 'The Bachelorette'? His Second Chance Didn’t Last Too Long
By Grace Wehniainen
Get Even More From Bustle — Sign Up For The Newsletter