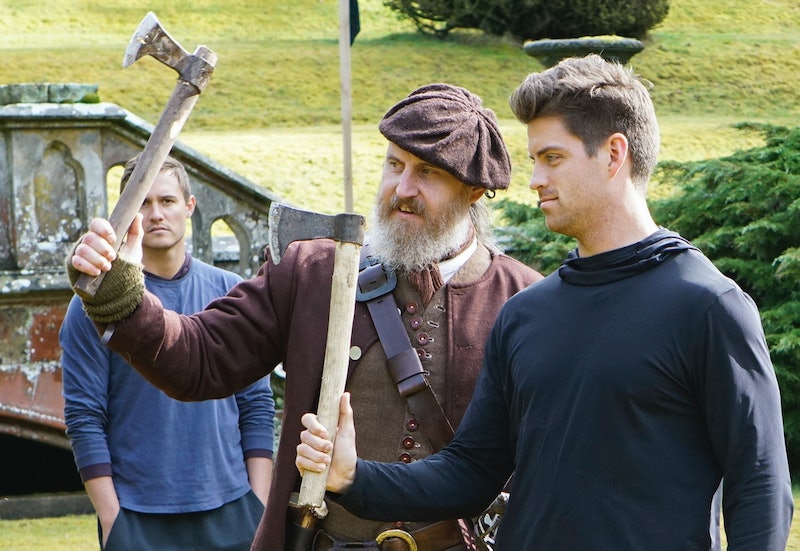 Garrett and Hannah have a great connection on The Bachelorette, but the same can't be said for Garrett and Luke P. As shown in promos, the two men have another showdown coming soon — this one even more extreme than the last. And if it gets bad enough, Hannah could decide to send one — or both — of them home. But if he is eliminated, Garrett could always go on Bachelor in Paradise in search of a second shot at love.

Though the last Garrett we saw on The Bachelorette ended up engaged to Becca Kufrin, the odds of Hannah getting engaged to this Garrett seems less likely. They only just bonded in Week 7 after they had their first one-on-one (and let's not forget, went bungee jumping naked), and Hannah doesn't seem to have the same chemistry with Garrett as she does with someone like Peter or even Luke.

Speaking of Luke, if Garrett keeps getting sucked into all the drama, it could push him further away from Hannah, and he might find himself golfing down in Mexico this summer. As the golf pro captioned a recent Instagram video of him hitting a ball out of a sand trap, "Life is a beach, I'm just playin in the sand." That seems a little too coincidental not to be a clue, doesn't it?

That being said, Garrett's Instagram Story shows he's currently in his hometown of Birmingham, Alabama, and not in Mexico. Bachelor creator Mike Fleiss confirmed on Twitter that this season of Bachelor in Paradise began filming on June 8. So if Garrett does eventually make it down to the beach, he will be one of the latecomers, like Diggy and Robby were in BiP Season 5.

So far from Hannah's season, Cam, John Paul Jones, and Kevin have all been announced as part of the Bachelor in Paradise Season 6 cast, which could either be good or bad news for Garrett. One the one hand, ABC is clearly eager to draw from Hannah's pool of men, which means Garrett could be on the top of their list. On the other, they may feel like Hannah's season is already represented, and want to pull from some older seasons in order to mix things up. It really depends whether ABC is more interested in recruiting fresh blood or dredging up old history.

Of course, if you're rooting for Hannah B. to pick Garrett, then you won't want to see him on Paradise at all. Another reason he may not end up on the beach? If he's in the running to be the next Bachelor (though that didn't stop Nick Viall). However, when Fleiss tweeted asking for fans' opinions about who should lead the show next, Garrett really wasn't part of the conversation, so BiP seems like his best bet for staying on the franchise.

If Garrett can survive Luke yelling at him in Week 8, then he might end up with Hannah, making his chances of being on BiP irrelevant. And if not, well — there will be plenty of sand traps in Mexico for him to golf himself out of.