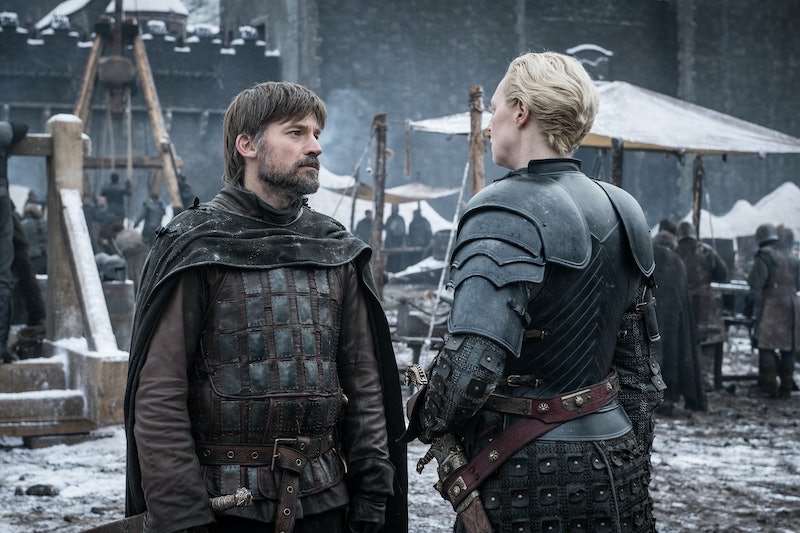 The Battle of Winterfell is going to be brutal, there's just no way around it. And with Jaime and Brienne in the left flank leading the charge, it's hard not to wonder if Jaime will die for Brienne in the Battle of Winterfell — or vice versa. Game of Thrones gave the two a beautiful moment in episode two of the season, "A Knight of the Seven Kingdoms," where Jaime knighted Brienne. But as beautiful as the gesture was, it also felt like the beginning of the end for one or both of the characters.

But Jaime's time may not be up just yet. The idea of him dying so that Brienne can live is tragic and heroic. As bookends go, it would be a great way to close out the Kingslayer's story. After all, he began the series by making the terrible decision of pushing Bran out of a window to protect Cersei, so to see him choose to give his life to protect Brienne would be very on brand. Even Bran recently reminded viewers of Jaime's words in the pilot — "The things we do for love." And he's proven that he does indeed love Brienne. Otherwise he wouldn't have knighted her, or asked to serve under her.

The only problem is that Jaime has some serious unfinished business whereas Brienne's story is tied up quite nicely at the end of season two. Everyone wants to see her survive, but narratively speaking, she's attained everything she ever yearned for including the respect of her fellow warriors and a knighthood. That's why you should probably prepare for her to die valiantly so that Jaime can live.

Jaime may get a hero's death before everything's said and done, but Bran heavily implies to him in the godswood at Winterfell that he has a role to play in the battles to come. There's a certain romance to the idea that his role is simply to sacrifice himself for Brienne, but with Cersei still on the Iron Throne and Bronn on a mission to kill the Lannister brothers, there's still a reckoning that needs to happen between him and his twin.

Right now, the imminent battle with the Night King and his army feels like the most important war of them all. However, there's a far more personal war that has to be fought after this one, and that's the battle for the Iron Throne. At this point, it's not clear who should be ruling the Seven Kingdoms, but everyone can probably agree that it shouldn't be Cersei.

And in terms of living people who can get close enough to Cersei to kill her, Jaime is at the top of the list. Barring a major twist — like him making the ultimate sacrifice for Brienne and being rewarded with Arya stealing his face — he's almost certainly going to see King's Landing again.

Would Jaime die for Brienne if given the chance? Absolutely. But she's unlikely to allow him to make such a grand gesture. Their relationship has been all about subverting tropes, and you can bet that they're about to do it again with Jaime being the damsel that Brienne's heroic knight dies to save.

Jaime won't let her death be in vain though. At his core, the Kingslayer will always be a man who is guided by his heart. For however long he has left, he'll live an honorable life in Brienne's name — even if that means he has to take down his sister for the good of the Seven Kingdoms.