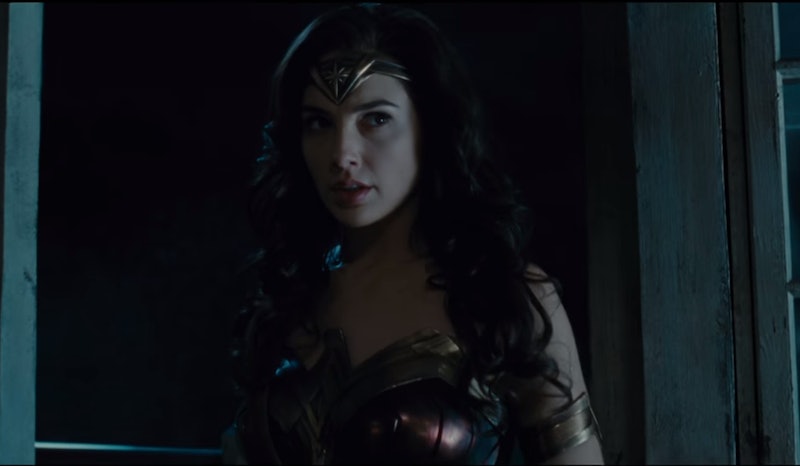 Diana Prince arrived at the box office with her lasso of truth and a sincere belief that humanity, no matter how flawed, deserves heroes. While Wonder Woman has been an undeniable hit, some moviegoers found the film's plot too cheesy to be taken seriously. To that I say, Wonder Woman's message of love is not only necessary, it's vital for this generation and every generation to hear, especially right now.

The world can feel like a dark place. Between the terrorist attacks in Great Britain, the horrors in Syria, and the deep divide in the United States, it's becoming harder and harder for people to see the good in each other. Pop culture can sometimes exacerbate the problem by reflecting cynicism and despair instead of hope, especially in its heroes. Superman, a paragon of quintessential American values, was put on trial in Batman v. Superman, while Captain America's ongoing comic book arc has turned him into a villain. Some of the world's fictional heroes are becoming so dark and gritty, they're barely recognizable, and they certainly aren't offering anything resembling hope for a better future.

Then along came director Patty Jenkins and Diana, a warrior who becomes enamored with humanity's charms even as World War I rages around her. In a New York Times interview, Jenkins revealed the word "cheesy" is not part of her vocabulary for good reason. She said,

"Cheesy is one of the words banned in my world. I’m tired of sincerity being something we have to be afraid of doing. It's been like that for 20 years, that the entertainment and art world has shied away from sincerity, real sincerity, because they feel they have to wink at the audience because that’s what the kids like. We have to do the real stories now. The world is in crisis."

In the movie, Diana learns an unsettling truth about herself. The kind of truth that could change how she sees herself and her role in the word, but instead, it pushes her to continue on a path of goodness and heroism. Because above all else, Diana believes in love. She believes in its power to change people and to mend the world, and she's absolutely, apologetically full of the emotion.

Some viewers are always going to roll their eyes at this idea. Even though it's a sentiment as old as time itself, it's not particularly "cool." More than that, there are people who simply don't believe it's realistic. They think the world is naturally corrupt and that a concept as simple as love is not the solution to the great divide that exists between so many.

But, isn't love the one thing everyone has in common? Given the choice between a hero who acts out of revenge, and one who draws strength from her heart, I'll choose the latter every time. Early in the film, Diana's mother tells her, "You have been my greatest love. Be careful, Diana. They do not deserve you." Her mother's wrong though, the world does deserve heroes like Diana, despite all of the horrible things people do to other people, because people are not inherently bad.

Acts of terror have, unfortunately, become expected these days. Whether you head to a concert, to school, or a theater, there is no longer an expectation of safety. This kind of fear takes its toll on people. The world seems a little weary at the moment, which is why Wonder Woman is a box office blessing. Here is a movie that says, "Yes, there is darkness in the world, but there's light too, and it's in all of you."

As Jenkins so eloquently said in her Times interview,

Diana doesn't turn her back on the world when she sees it at its worst. She has moments of doubt, maybe even of despair, but ultimately she gives up everything in the name of love for a place that isn't even her home. There is power in that kind of goodness — the kind of power that can and does eclipse hate. So while I can understand that for some people a message so simple and yet so brave can feel "cheesy," it is, in fact, far more honest than the idea that there's no chance for the world to be a better place.

Right now, the world needs more love in it — love in all of its myriad forms — because it's what gets people through the hard times, it's what inspires so much art and beauty, and it's what unites people across cultures and generations. It seems no modern hero understands that truth more than Wonder Woman, and she's arrived with her message of love just when this world needs her more than ever.

Editor's Note: A previous version of this article incorrectly mentioned the movie being set during World War II, instead of World War I.