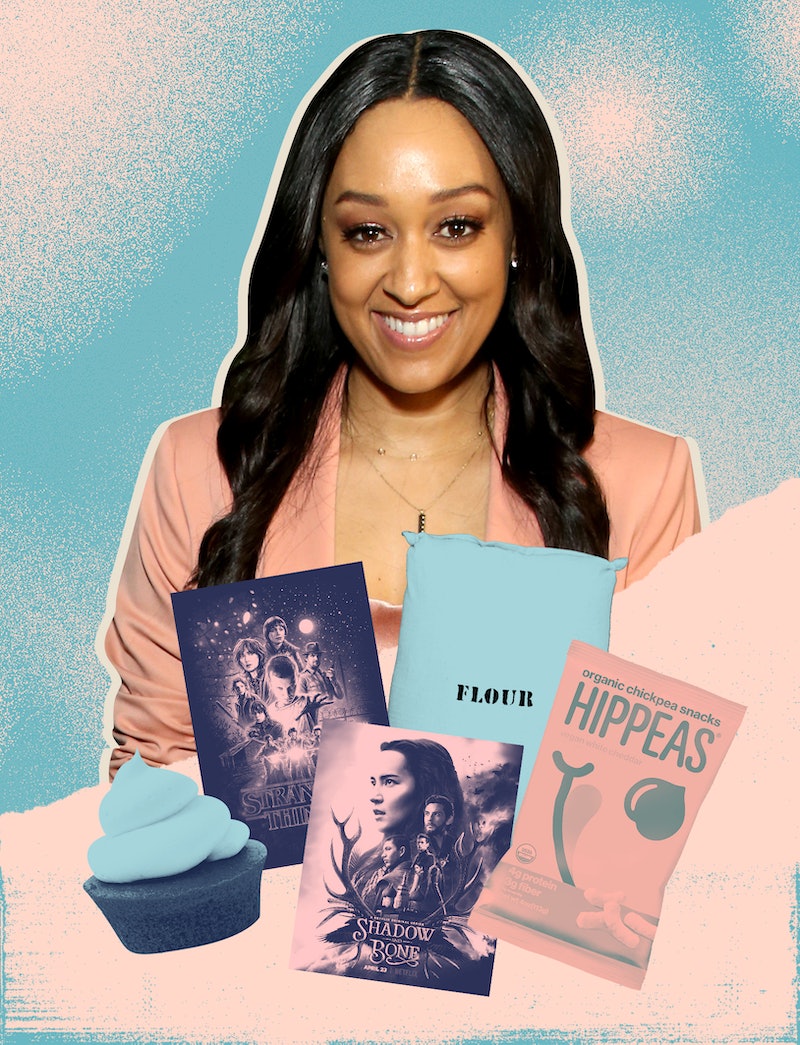 In “Pep Talk,” Bustle chats with celebrities about finding levity in a period of loss. This month, Tia Mowry talks about busyness as a defense mechanism, fantasy TV, and her new cookbook.

When Tia Mowry was in college, she and her twin sister, Tamera, studied abroad in Florence. One weekend, they took a ferry ride to the island of Sardinia off Italy’s western coast, and found themselves atop a hill, overlooking the Mediterranean Sea, eating cheese, olives, and grilled fish in a “restaurant the size of a shoebox.” Mowry remembers thinking, “Did they just catch that straight from the ocean? Pick the vegetables from a hidden garden?” The moment has stayed with her since.

Mowry shares this memory in her new cookbook, The Quick Fix Kitchen, her second after 2017’s Whole New You. It offers 65 recipes, some of which are Italian-inspired, like a creamy, Alfredo-type pasta and a stuffed pesto chicken. The cookbook — whose name reflects her weekly YouTube cooking channel, Tia Mowry’s Quick Fix — promises flavorful food that’s easy to prepare. Mowry also dedicates a portion of the book to food shopping tips and pantry organization ideas.

“A lot of these recipes are motivated by how I navigate the kitchen as a working mom,” she tells Bustle. “These recipes are about practicality and less mess, so it’s a lot of sheet-pan dinners and one-pot meals. I want to encourage people to get in the kitchen, not feel overwhelmed, and create memories over food.”

In the past year, the award-winning actor — Sister, Sister, anyone? — has solidified her position as a true renaissance woman. She launched a vitamin and supplement line called Anser, is gearing up to launch a cookware line called Spice, and is celebrating a multi-year licensing deal for her YouTube series. (Starting this month, 80 episodes will air on CLEO TV.)

Below, Mowry talks to Bustle about learning to slow down, making gnocchi from scratch, and finding Zen in a chaotic year.

It sounds like you were very busy during lockdowns. Was that a coping mechanism for you?

A lot of people were being overly productive during quarantine, almost like a defense mechanism. I was absolutely one of those people, but in time, I learned that being non-productive was being productive, in a way. I learned how to relax and prioritize self-care, whether it was meditating, taking a nap, or indulging in some red velvet cupcakes. Once I started to focus on that, I had a better grasp of my day-to-day, which made me feel less anxious.

Were there any silver linings to that time at home?

The biggest positive was spending quality time with my family. Prior to 2020, I never spent that much consecutive time with them. There was so much self-care and healing and communicating on a deeper level with my husband and children. I’m very much a go-getter, but taking care of yourself is important if you want to continue doing what you love. The pandemic helped me to find that dance, and now I can say with confidence that I’m in control.

Did you pick up any new hobbies last year?

I made gnocchi from scratch, which was a lot easier than I expected. I wanted to learn how to work with flour more, because it can be very delicate, so I decided to dive into the gnocchi, and it was delicious.

As you were testing and retesting recipes for your cookbook, did you ever get sick of the kitchen?

It didn’t feel like work! Though it was impossible to find yeast and flour due to the food shortages. I’ve always viewed food, cooking, and being in the kitchen as a unifier. That’s how I grew up. In fact, my husband [Cory Hardrict] and I were just talking about Thanksgiving and he said, “You’ve been doing Thanksgiving dinner for the past five or six years. Let me have my aunt come down and cook for everybody.” I said that was fine as long as I’m able to cook three or four dishes. He’s like, “Oh my gosh, you don’t get it. You need a break.” I had to tell him, “You don’t understand! Cooking is my safe place.”

You’re currently starring as Coco on Netflix’s Family Reunion. Can you talk about your personal TV habits?

I’m a huge fan of Stranger Things. I love the nostalgia that it gives me, from being a kid who grew up in the ’80s. I recently devoured Shadow and Bone. Not only is the storyline fun, magical, and entertaining, it’s also breaking stereotypes. The lead girl appears to be of Asian descent, but her love interest is not Asian. And then there’s another character who is a samurai, and she’s [South Asian].

What snacks do you like to eat while watching these shows?

Hippeas! They’re organic snacks made from chickpeas, so it’s healthier than chowing down on an entire bag of potato chips. They come in so many different flavors, but my favorite is barbecue.

Switching gears, what have you been most grateful for during this past year?

I’m just grateful for life. These days, I’m appreciative of giving and receiving love. I appreciate my family unit. I feel very blessed to have the life that I have.

And for a final question: The past year has been really hard. What would you tell someone who’s having a hard time right now?

One of my friends offered me a different perspective as it relates to the pandemic, and it really helped me. She said, “When you injured yourself as a child, whether it was a broken ankle or a scraped knee, you gave yourself time. You were forgiving. You didn’t rush the healing process. You trusted the process, and you allowed yourself to heal.”

Don’t get too ahead of yourself. Focus on taking one step at a time and putting one foot forward in front of the other. Forgive yourself for feeling the way you feel. It’s normal to feel overwhelmed. Know that eventually this too shall pass, and that everything will be OK.

More like this
At 28, Rosie Perez Risked Her Career To Stop Playing Stereotypes
By Gabrielle Bondi
Jessica Simpson On The Time She Was Pursued By A Backstreet Boy & An *NSYNC Member
By The Editors
Watch Jacinda Arden’s Devastatingly Honest Resignation Speech
By Sam Ramsden
Hailee Kaleem Wright's Topsy-Turvy Path From MTV To Broadway
By Samantha Leach
Get Even More From Bustle — Sign Up For The Newsletter
From hair trends to relationship advice, our daily newsletter has everything you need to sound like a person who’s on TikTok, even if you aren’t.