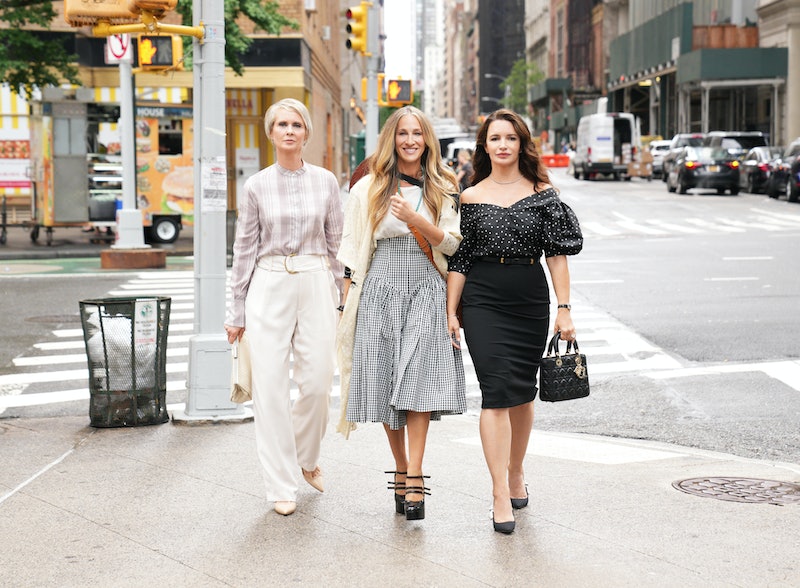 Though Carrie, Charlotte, and Miranda’s fashion and beauty styles have evolved since the first Sex and the City episode aired in 1998, their looks have all, in a sense, remained true to their core personalities. Now that viewers are reunited with the characters — and meeting new ones — in And Just Like That..., the makeup they wear on the show (not to mention their wardrobes) has evolved right along with them.

The makeup department head behind the series, Sherri Berman Laurence, carefully plotted how the cast members of And Just Like That... would appear today. The most important thing, she tells Bustle, was to be true to their age. “The goal was to appreciate where they are now. We weren’t trying to make them look 20,” she says. That meant focusing more on the skin and its highlights and contours — “just enhancing their beauty,” says Berman Laurence. She also turned to more classic colors — like the plum lip worn by Seema Patel (Sarita Choudhury) — versus bright hues and glittery shades.

Other than color choices, Berman Laurence tweaked her application technique a bit when doing the eye makeup looks on the women of the show. “There’s a way you can put eyeliner on that can droop the eye down,” she says. “On a younger woman, it can make you more doe-eyed. But on a mature woman, it can bring the face down. What you do is take the line and lift it up more. There’s a lot more creating of a crease and building a larger eyelid.”

While each cast member had their own unique makeup styles, Berman Laurence says there was one product every single one of them used: the Lashify Control Kit. “It’s a temporary eyelash extension system,” she says. “You can customize them beautifully to each person if you want a heavier or shorter length. We did this across the board on all the ladies.” There was also a lot of backstage love for Tatcha’s Dewy Skin Mist. “Tatcha was a really big brand we used on most of our people,” says Berman Laurence. “We’d use the mist to freshen up — it gives nice moisture, and you can spray it right on makeup.”

Here, Berman Laurence shares the details and inspiration behind each character’s makeup looks.

Elaine Offers Woulard, Sarah Jessica Parker’s longtime makeup artist, created Carrie’s beauty looks on the show. “It was more of a fresh face and easy look to her,” Berman Laurence says. Think: a touch of eyeliner, a dusting of bronzer along her cheekbones, and a neutral pink lip. Her subtle makeup pairs perfectly with her flowing wavy hair, which she’s often seen wearing down and in a middle part throughout the series.

You may have noticed Miranda’s wearing a little more makeup than she used to — and there’s a reason for that. “Miranda is embracing a new sense of self,” says Berman Laurence. “Her hair is gray now, and her makeup pops more than in the past, when it was all very subtle and kind of blended in together.” Most noticeable is Miranda’s newfound penchant for a smoky eye: At both Mr. Big’s funeral and her first day at school, she’s wearing one, complete with big lashes and dark eyeshadow. Cynthia Nixon worked with makeup artist Kerrie Plant-Price during filming.

Charlotte is still very much the prim and proper New Yorker fans remember. As such, her makeup, done by Matin Maulawizada, remained “very polished,” says Berman Laurence. “She has a very Upper East Side high society look.” Viewers will mainly see Charlotte sporting a soft pink blush, eyeliner on the top of her lash line, defined brows, and a rosy pink lip — simple, but classic.

Fans are introduced to Lisa as Charlotte’s friend — a tall artist-slash-mom with a penchant for bright accessories. “Our main focus with her was on highlighting her skin,” says Berman Laurence, nodding to her golden, glowing complexion. “We did the eyes more subtle. But there were opportunities where she’d be at an event, and we were able to put a bolder lip or more liner on her.” She also played off the colors Lisa was wearing. “I loved putting a bright coral lip gloss on her,” says Berman Laurence, referencing a scene where Lisa’s wearing the same color accessory.

Comedian and podcaster Che Diaz starts off as Carrie’s friend but becomes more involved with Miranda (I’ll avoid revealing any spoilers). For them, Berman Laurence says the makeup remained natural and subtle, and there was more of an emphasis on their tattoos, which were custom-made (and fake). “Sara [Ramirez, who plays Che] was very into designing and collaborating about their tattoos — each one had a specific meaning,” she tells Bustle. One is a tombstone that says, “gender rules” — “because, for obvious reasons, they want gender rules to be dead,” says Berman Laurence.

Berman Laurence describes Dr. Nya Wallace as very bohemian and wanted her beauty looks to reflect that. “She has a no-makeup makeup look except for when she goes out or has a dinner date, things like that,” she says. “In her day-to-day life, she was pretty natural, focusing on the skin.”

When working with Sarita Choudhury, who played Seema Patel, Berman Laurence pulled inspo from old Hollywood glamour and Bianca Jagger. “With her, we did strong lines, matte dark lips, and plums,” she says. “You never see Seema without a lip.” She recalls the scene where viewers first see Seema: “Her car matches her clothes, and she exits the car smoking a cigarette,” she says. “It was a whole thing with this initial look for her, so we did a shimmery eye with a heavy lash and liner and a very bold plum lipstick to make her look as strong as she could possibly look.”

More like this
23 Romantic Makeup Ideas For Valentine's Day 2023
By Olivia Rose Rushing
The Best Beauty Looks Spotted At Paris Couture Week 2023
By Audrey Noble
11 Stunning Critics' Choice Awards Beauty Moments
By Audrey Noble
15 Modernized '60s Makeup Looks & Hairstyles That Feel Wonderfully Retro
By Olivia Rose Rushing
Get Even More From Bustle — Sign Up For The Newsletter
From hair trends to relationship advice, our daily newsletter has everything you need to sound like a person who’s on TikTok, even if you aren’t.