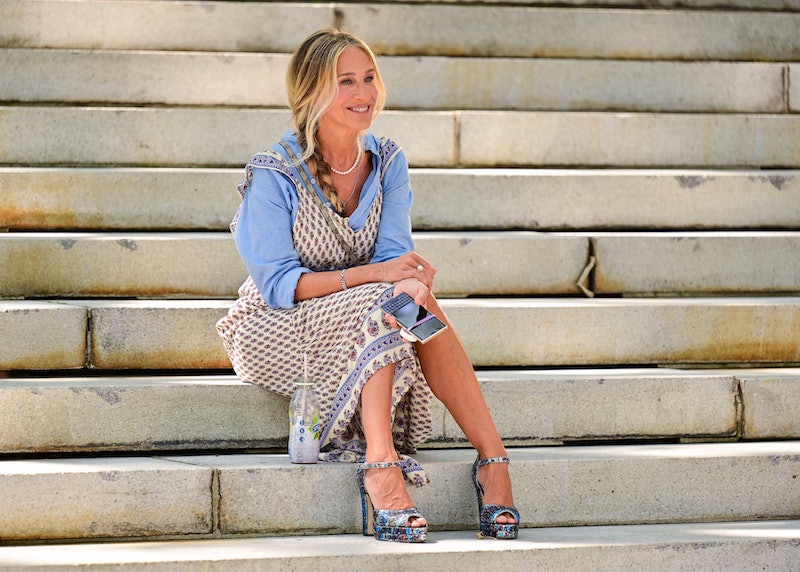 It’s been nearly 18 years since the Sex and the City finale aired on HBO, and with the exception of two feature films in 2008 and 2011, fans haven’t been able to check in on their favorite ladies — or their designer outfits. That all changes on Thursday, Dec. 9, when And Just Like That… premieres on HBO Max. Promising to be a new chapter in the sartorially minded saga — sans Samantha Jones, played by Kim Cattrall — it will follow Carrie Bradshaw, Miranda Hobbes, and Charlotte York-Goldenblatt as they embrace the continually complicated nature of love, loss, and friendship in their fifties. And you can bet that the Sex and the City reboot fashion will get everyone talking again.

Eagle-eyed fans have already been pulling apart and analyzing every And Just Like That... outfit, from the lehenga to the overalls. Adding to the pressure, the new costume designers, Molly Rogers and Danny Santiago, are replacing fashion icon Patricia Field, who was busy working on Emily in Paris Season 2.

“It was interesting to be under that kind of scrutiny, because we weren’t part of that world in the original series or the movies,” says Rogers, who was unaccustomed to her work being fodder for social media. “[It was] literally a foreign landscape,” she tells Bustle.

Rogers and Santiago have been chronicling some of the behind-the-scenes fashion moments on the official Instagram account for the show’s costume department, but plenty of SATC fan pages are chiming in with their own theories.

“We didn’t let [the feedback] touch us when we were in the fitting rooms,” Rogers says. “We did whatever we thought was beautiful and that the girls were into. We tried to express ourselves freely.”

One look that went viral was a paisley print maxi dress. In July, Sarah Jessica Parker (as Bradshaw) was snapped walking the streets of New York City while filming, with the dress layered over a blue oxford shirt.

According to one site’s speculation, it could’ve originated from a surprising place: Forever 21. The mere thought of someone so designer-obsessed wearing fast fashion didn’t sit well with fans.

“That dress was purchased at a thrift store maybe five years ago, and it had no label on it,” Santiago clarifies now. “It was something I had in my archive collection. We know there was a designer out of India who made that dress, and Forever 21 had found [it] and knocked it off.”

He theorizes that the AJLT costume designers “probably have the original,” considering the timing of when he first stumbled upon the dress about five years ago. “It was something I found in a Salvation Army or something like that.”

Bradshaw wearing secondhand finds has been a key element of her modus operandi, so it’s easy to imagine her spotting the dress in the window of a boutique and adding it to her high-and-low wardrobe.

“She’s always mixed vintage with new things,” says Santiago of the character. “She doesn’t just wear designer [clothes], so it wasn’t unusual for us to use a dress that came from a thrift store that didn’t have a tag on it.”

Another look that got fans buzzing: a powder blue, body-hugging, one-shoulder number by Norma Kamali, which has already been dubbed “the new Carrie dress.” It’s drawn comparisons to a similarly fitted dress Bradshaw wore in the original series, which was in a more muted, dark gray hue, and which became one of SATC’s most iconic looks.

“The minute I saw that clingy body-conscious dress in that pretty color, I knew it was going to be compared to that dress from the original series,” Rogers says. “It just had that vibe. That was exciting, to see people connect it that way.”

Neither designer can get into the specifics of why Bradshaw wears certain outfits in the 2021 reboot — like her lehenga, for instance. “I wish we could say more, but we really, really can’t,” Rogers says. “But it’s a good story. ​​The truth will come to the surface in the episodes.” But there is “meaning” behind each piece from the original series that they feature on the reboot, they say. (Conveniently enough, nearly everything from Carrie’s closet was kept in Parker’s storage unit.)

“We would say, ‘That’s a great place for the Roger [belt],’” Rogers recalls, referencing a black studded belt that’s one of Carrie’s most recognized accessories. “We would run upstairs and get it. Anytime we set something, it felt very organic. We weren’t forcing ourselves to place a blue Manolo somewhere, really.” Both costume designers know that expectations for the fashion on the reboot are at an all-time high. “We tried to make sure that if it wasn’t beautiful, it didn’t make the cut,” Rogers says.