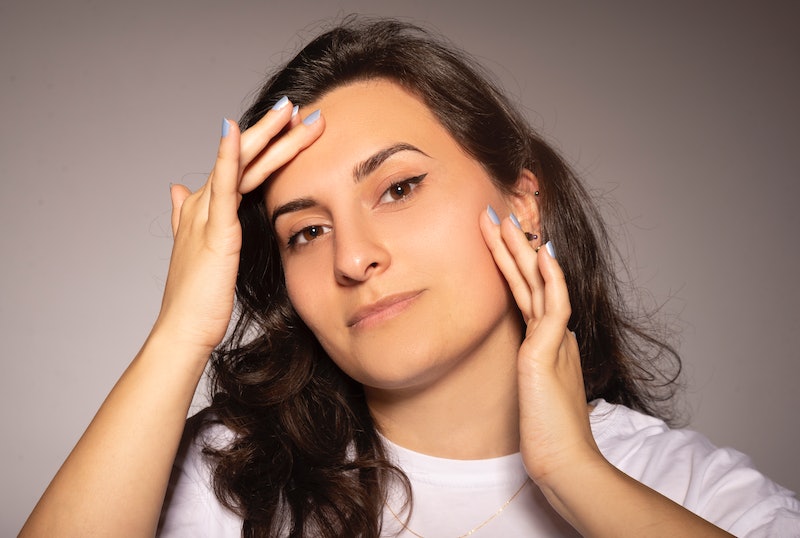 When TikTok users find a beauty product that works, they tend to share it with the digital world by way of a video extolling the formula’s abilities. Recently praised concoctions, for example, include a full-coverage foundation balm and a color-changing lipstick. The latest viral hit, however, is the magically de-puffing prowess of Peter Thomas Roth’s Instant FirmX Temporary Eye Tightener.

TikTok user @Trinidad1967, a 54-year-old woman, shared a video demonstrating the eye cream’s effects by applying it underneath just one eye so viewers could see the comparison to her skin without it. Two minutes later, the results were visibly astounding: The treated eye area had completely de-puffed and smoothed out. Since it was posted on Aug. 25, it’s garnered over 5 million views... and the Peter Thomas Roth product is sold out on multiple beauty retailers’ websites.

Although the de-puffing effects seem otherworldly, the key ingredient to the product’s efficacy isn’t. The star that does the smoothing trick is a salt compound known as sodium silicate, an eye cream ingredient that delivers the most dramatic short-term results, says Dr. Marie Hayag, M.D., a board-certified dermatologist and founder of Fifth Avenue Aesthetics in New York City.

“The sodium silicate creates a framework that contracts as the product dries, and this is what provides the almost instant tightening effect,” says Hayag. These effects, however, only last as long as the product remains on your skin. “The benefits will be gone as soon as the product is washed off, so the results are definitely temporary,” she explains.

To address under-eye puffiness on all fronts, Hayag recommends reaching for an eye cream that has sodium silicate combined with another ingredient that has a “slower burn,” like peptides, to smooth the skin over time. Peptides work by stimulating collagen production and reducing fine lines and wrinkles. She also points to skin-boosting superstars vitamin C and vitamin E, both antioxidants that protect your complexion from free radical damage and help skin maintain its elasticity.

While the viral Peter Thomas Roth product is still sold out, you can shop de-puffing eye creams with similar results below.

Besides the puff-quashing sodium silicate, this lightweight gel also contains hyaluronic acid and glycerin, both of which help keep your under-eye area plump with moisture. Your skin also reaps the benefits of retinol, the ultimate MVP for smoothing and stimulating collagen production.

Your under-eye bags stand zero chance against this skin-smoothing concoction: The gel formula features sodium silicate along with anti-inflammatory turmeric and neem as well as apple fruit extract for added hydration.

Tackle two eye-area concerns at once with this lifting formula, which handles puffiness with sodium silicate but also helps quash dark circles over time thanks to retinyl palmitate (a vitamin A derivative similar to retinol), peptides, and antioxidants.

Caffeine is another go-to for eye creams that target puffiness since it constricts the blood vessels underneath the skin to brighten and smooth the area. This baby contains that plus sodium silicate for a one-two punch on your complexion.

While sodium silicate is famous for working its magic in a flash, this serum purportedly keeps the under-eye area smooth and hydrated for up to 10 hours. It absorbs quickly without leaving any residue for easy wear, so you can apply makeup over it — if you still need it.

More like this
The 9 Best Vagina Hygiene Products, According To ShowerTok
By Carolyn Steber
John Legend's Loved01 Skin Care Line Is All About Accessibility
By Carolyn Steber
15 January 2023 Beauty Launches Our Editors Can't Get Enough Of
By Rachel Lapidos
10 Shower Products That Have Gained Fame On TikTok
By Audrey Noble
Get Even More From Bustle — Sign Up For The Newsletter
From hair trends to relationship advice, our daily newsletter has everything you need to sound like a person who’s on TikTok, even if you aren’t.