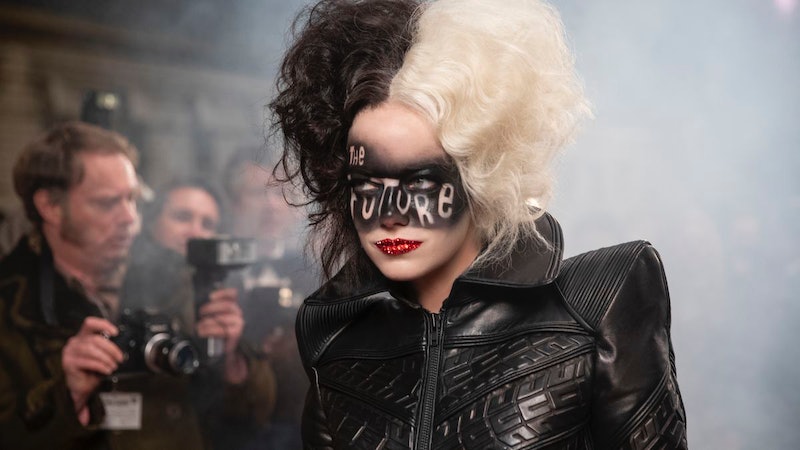 There have been several iterations of Disney’s most stylish villain — Cruella de Vil — since she was first introduced to the world in 1956. (Who could forget Glenn Close’s terrifying cackle when she played her in the ‘90s classic 101 Dalmatians?) But the newest version of the character, played by Emma Stone, is a bit different: Cruella, in theaters now, tells the story of de Vil before she became the villainous, Dalmatian-hating antihero — who also happens to have a seriously killer wardrobe and beauty look.

Set in London during the ‘70s, the film centers around an aspiring fashion designer named Estella Miller. Spoiler alert: Miller became an orphan as a young girl after she witnessed her mother being thrown off a cliff by a pack of Dalmatians. While working as a cleaner at a department store, Miller gets noticed — albeit after drunkenly redesigning the store’s window displays — by a haute couture designer known as the Baroness (played by Emma Thompson). While designing for her, Miller finds out that the Baroness was involved in her mother’s death and seeks revenge by disguising herself as Cruella de Vil, crashing the Baroness’ parties and holding her own extravagant fashion shows to outdo her.

The transformation from a red-headed and bare-faced Estella Miller to the ultra-chic Cruella de Vil was marked by her aesthetic — namely, her hair and makeup. “When we started to create the looks for Cruella, the biggest thing we had to [remember] was that there needed to be a deception to it,” Cruella’s makeup artist and hairstylist Nadia Stacey tells Bustle over Zoom. “She’s hiding herself from the Baroness, so I couldn’t just do a standard beauty look. I needed to add different textures to make a slight barrier.” Stacey says she used an array of materials, from feathers and jewels to stencils and crystals. References came far and wide: the 18th century, avant-garde hair shows, John Galliano for Dior, punk and glam rock, and drag culture. “I had just worked on the film Everybody’s Talking About Jamie before Cruella, so I’d been immersed in that drag world. I really love that they spend so long perfecting a look over years and years and years, and I just thought this is what Cruella would do. She’s creating another version of herself.”

A vampy red lip and a smoky eye were mainstays. For the former, Stacey used a mixture of different red lipsticks — all from MAC Cosmetics. Naturally, cult classics like Ruby Woo and Lady Danger (“so fitting,” says Stacey) were used, as well as Camden Caper, a moody plum that’s currently sold out and is part of MAC’s new Cruella-themed collection. For de Vil’s eyes, Stacey referenced the glam-rock look of Siouxsie Sioux from Siouxsie and the Banshees. “I wanted to get that very square eyebrow shape in there,” she says. “The thing with punk [beauty] is it’s very black and graphic, a harsh look. I wanted to give it a softer element, so it was all about the blending.” To achieve the look, she created an exaggerated cat eye and used an eyeshadows in different graphite grays.

Of course, Stacey was also responsible for creating de Vil’s iconic, black-and-white hair. “I didn’t want [the white part] to be bright white because that would be something you could find in a joke shop,” she explains. “It needed to be slightly off-white, and to get that was so hard. I only had two wigs that were made for Emma and I kept adding bangs and different elements to change them. I kept getting excited. But it was really challenging.” The Baroness’ hair was equally transfixing, with perfectly-in-place updos and even bedazzled embellishments. “We needed her to have a very different look — a very sculpted, chic, perfected silhouette as opposed to the wildness of Cruella,” says Stacey. “I just kept adding to the comedy of her. They both play with their looks, but with the Baroness, there’s never any mess to it.”

Stacey added that she was commissioned to work on Cruella thanks for Stone herself, who she worked with previously on the 2018 drama The Favourite. “We’d been friends since,” says Stacey. “To work with her again and create a huge character for her was lovely. She allowed me the freedom to play and come up with all these [wildly creative] ideas. And she absolutely wore them for me.”