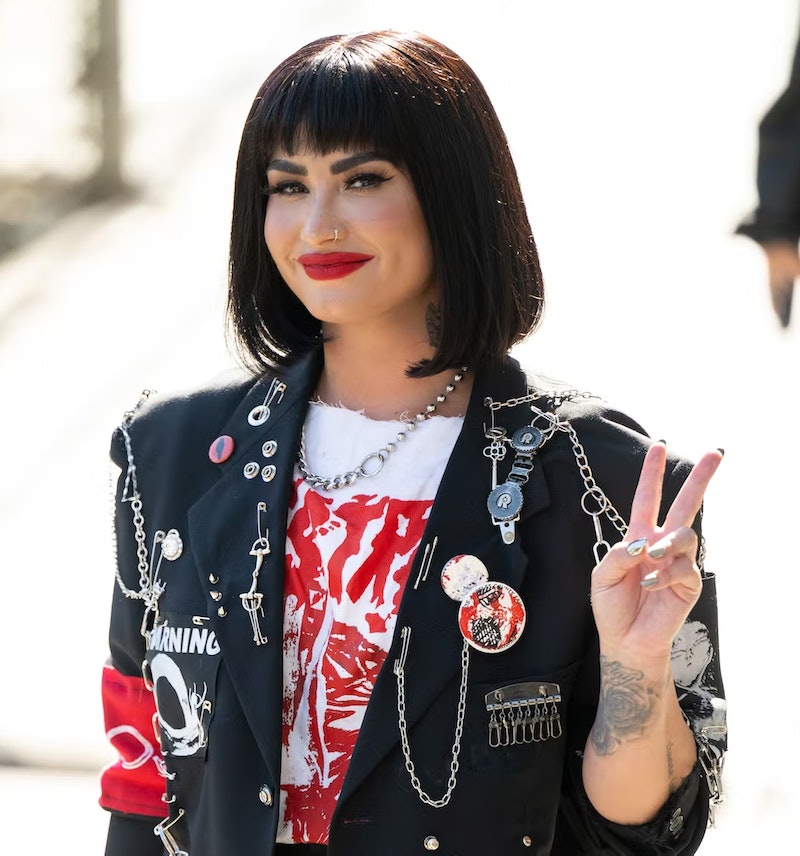 Singer and former Disney Channel star Demi Lovato is known for experimenting with her looks. Over the last two years alone, Lovato has shown off a pink pixie cut, a short jet black mullet, a grown-out mullet, a buzzcut, and a symbolic spider tattoo on the side of her head. Now, Lovato — who recently announced she would identify as she/her along with they/them pronouns — once again revealed a fresh new hairdo.

Lovato replaced the blunt bangs she’s been rocking as of late with a relaxed, tousled fringe. Taking to her Instagram stories, Lovato shared a picture of herself sporting the new hair. Wearing a ruffled black top and a rosary around her neck, complete with soft pink lips and a winged liner, Lovato looked every inch the pop star. In a second picture, the singer was dressed in a black lace camisole with an ombré red lip and dark kohl around her lids, adding to the rocker vibe of the fringe.

Giving her team credit, Lovato tagged her hair and makeup artists in the story; the beauty look was created by celebrity makeup artist Jill Powell, whilst the fringe was styled by Cesar Deleon Ramirez, using products from his brand, The Wildform. Ramirez also posted an image of Lovato’s finished look on his Instagram — a cheeky bathroom selfie where they are dressed in a plaid blazer adorned with a silver cross-adorned body jewellery piece.

The singer is presently gearing up for her eighth studio album, Holy Fvck, which is set to be released on Aug. 19. The cover art for the record places Lovato on a white cross-shaped pillow, explaining the continuing symbol of the crosses and rosemary in her styling during her promotional trail. Rooted in her pop rock roots, Lovato recently released the album’s lead single “Skin Of The Teeth.” We’re here for it.