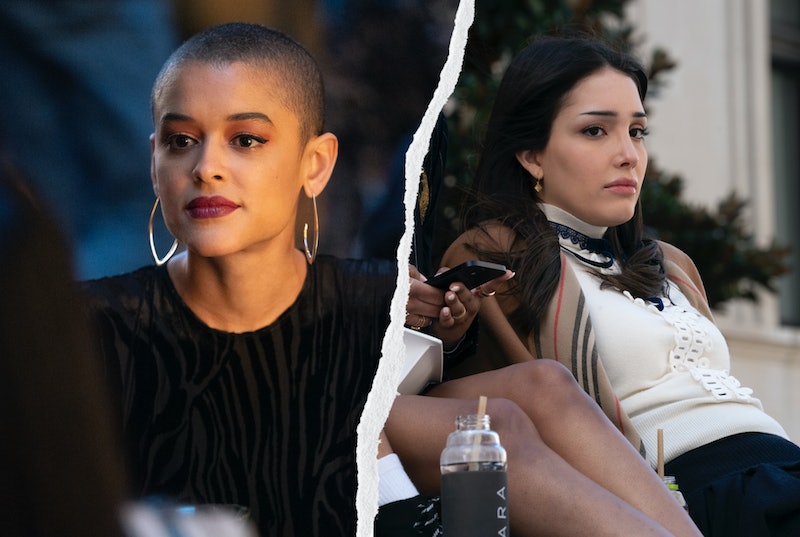 The original Gossip Girl was just as fun to watch for Serena van der Woodsen and Blair Waldorf’s beauty looks as it was for the juicy drama (personally, I’m still trying to rock headbands like a Constance Billiard High School student). And the Gossip Girl reboot, premiering Thursday, July 8, is staying true to form by delivering just as much beauty inspo.

With a new, very Gen Z cast, celeb makeup artist and show department head Amy Tagliamonti — who also worked with the OG characters — decided to experiment more, beauty-wise, this time around. That meant bright, bold colors, shimmery eyeshadows, and smoky liner, all of which fit into the reboot’s overall vibe, which is edgier than the original series. “Eric Daman, the costume designer, doesn’t follow fashion rules,” Tagliamonti tells Bustle. “He’ll mix polka dots with plaid, and it never seems wrong. Things you typically don’t think go together actually do, and I think with makeup we can do that.”

With Serena and Blair, Tagliamonti says the leading characters “knew who they were” and had signature looks: Serena’s go-to a fresh face and glossy lip, sometimes dressed up with highlighter and eyeliner, and Blair’s typically a touch of blush on the cheekbones, some mascara, and groomed brows. “With the reboot, there’s still a lot of figuring out for the characters, they’re learning who they are, and that gave me the freedom to play [with their makeup],” she says.

To nail the looks, Tagliamonti created color palettes for each cast member. For example: Julien Calloway, played by Jordan Alexander, gets an eclectic mix of bold hues and shimmery metallics: “She’s a little bit of everything,” she says. “Sometimes she’s a minimalist, but there are times she’s a maximalist wearing all the bright colors and neons and golds.” Zoya Lott, played by Whitney Peak, “is still figuring herself out, so her palette is a lighter one, and we keep her eyes warm a lot,” says Tagliamonti. There’s Kate Heller, a teacher played by Tavi Gevinson, who gets a “clean” makeup look since “she’s a very focused person,” Tagliamonti explains. Audrey is more “classic, soft, feminine.”

And then there’s Max Wolfe, played by Thomas Doherty, who’s essentially a pansexual, modern-day Chuck Bass. His father Gideon, played by Todd Almond, is a character Tagliamonti describes as a “peacock” whose beauty style matches his extravagant wardrobe. “He gets his nails done, he’s somebody that’s very colorful,” she says.

In many cases, it’s queen bee Calloway with the most vibrant makeup. One such occasion is her look in the eighth episode — Tagliamonti used an eyeshadow palette from Melt Cosmetics based on the movie Beetlejuice called Recently Deceased. “It has a shimmery green color that I paired with this amazing M.A.C. lipstick called ‘On and On,’” she says. “It’s frosted and looks dark purple, but then blue at times.” Another time, she wears silver shadow and heavy black eyeliner: “I was inspired at first by this Kat Von D Dazzle stick in Thundercloud,” says Tagliamonti. “Then I saw her costume, the slinky, sexy, sheer, high-collared black and silvery dress, and I just kept going. This is a look where I decided more is more, which isn’t typically my norm.”

One nostalgic theme — the early 2000s frosted look — was a common denominator. “M.A.C. has these Extra Dimension Eyeshadows that are super shimmery and frosty, which are so gorgeous,” says Tagliamonti. “I’m super into frosted colors right now.” That kind of bold makeup is a major element of Gossip Girl’s allure. “The show itself is never apologetic — it’s a heightened reality, and that’s what keeps everybody coming back.”

More like this
The Best Beauty Looks Spotted At Paris Couture Week 2023
By Audrey Noble
This Week’s New Makeup Releases & More Beauty Headlines
By Audrey Noble and Erin Stovall
11 Stunning Critics' Choice Awards Beauty Moments
By Audrey Noble
The Exact Contouring Makeup Trick Mary Phillips Uses On Hailey Bieber
By Olivia Rose Rushing
Get Even More From Bustle — Sign Up For The Newsletter
From hair trends to relationship advice, our daily newsletter has everything you need to sound like a person who’s on TikTok, even if you aren’t.