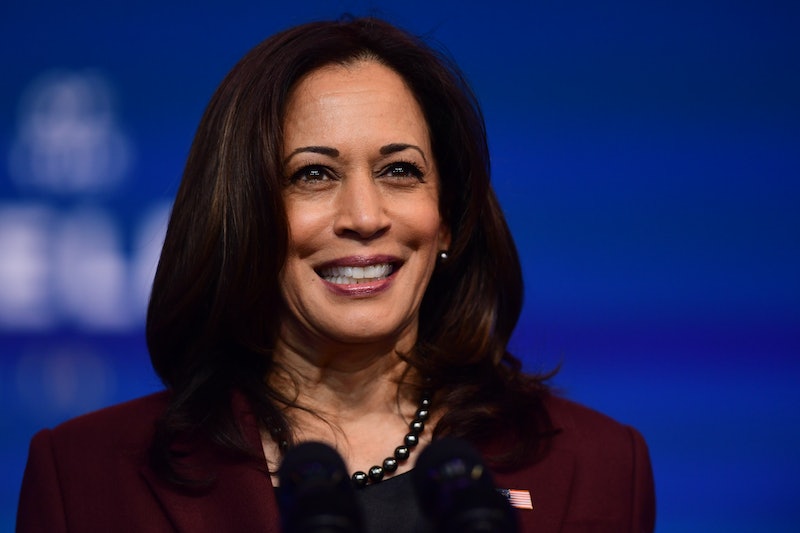 If a magazine cover hasn’t even landed on newsstands yet, does it make a sound? In the age of social media, it absolutely does, as evidenced by the recent uproar surrounding vice president-elect Kamala Harris' Vogue cover.

Last Sunday, the February 2020 cover of American Vogue was leaked and began circulating online. Many people questioned the cover’s authenticity until Vogue set the record straight on Monday, verifying that the leaked image — which features Harris in front of green and pink draping as a nod to her sorority Alpha Kappa Alpha — was indeed its February print cover. It also released a second image of the soon-to-be VP wearing a powder blue suit in front of a yellow backdrop, which the magazine is using for its February digital cover.

There’s plenty of commentary to read about what people don’t like about the print cover in particular.The Washington Post’s critic-at-large, Robin Givhan, wrote that Vogue “got too chummy too fast” with its overly casual creative direction.

Vogue editor-in-chief Anna Wintour has since responded to public criticism, telling The New York Times: “Obviously we have heard and understood the reaction to the print cover and I just want to reiterate that it was absolutely not our intention to, in any way, diminish the importance of the vice president-elect’s incredible victory.”

What’s been somewhat lost in the conversation surrounding the cover is the fashion itself. Vogue, after all, is still widely considered the top fashion magazine in the world, and its influence within the industry cannot be overstated.

Harris reportedly wore items from her own closet, perhaps to avoid the backlash Congresswoman Alexandria Ocasio-Cortez experienced after her styled Vanity Fair shoot. With each look the VP-elect selected, she's sending a powerful albeit silent message.

For the print cover, she wore a dark brown jacket by American designer Donald Deal, a white blouse, black skinny jeans, and black Converse sneakers. It’s a look that feels like it could've been plucked from her wardrobe on the campaign trail. With it, Harris is conveying a casual vibe and an air of approachability.

As the first Black and Indian woman to be elected vice president, coming across as familiar and relatable is going to be an ongoing challenge for Harris, especially as the country faces a continued racial reckoning.

Conversely, the digital cover is markedly more formal in tone and presentation. Here, too, Harris opted for an American designer, Michael Kors, and accessorized with her go-to pearls, also an AKA homage. She completed that look with the requisite American flag pin on her blazer lapel.

According to color theory, the blue color Harris wore is typically associated with freedom, expansiveness, inspiration, and sensitivity. The softness of this shade specifically is soothing and calming — a sartorial balm of sorts for these troubled times. Public figures like Kate Middleton have been known to wear the peaceful hue during appearances addressing the pandemic.

Harris is no stranger to communicating through color. She picked a white suit for her victory speech as a nod to Shirley Chisholm, the first woman and African American to run for U.S. President, and the Suffragette movement, formed 100 years ago to give women the right to vote.

Knowing that she's used color before to send a message, it stands to reason that Harris was intentional about choosing blue for her Vogue cover as well.

Regardless of what you think about these covers, it’s clear that, like famous female politicians who have come before her, Harris' personal style will be subjected to never-ending scrutiny. Remember the controversy surrounding First Lady Michelle Obama’s penchant for sleeveless dresses? And how Hillary Clinton's suits were both venerated and vilified?

If anybody can handle the criticism, it’s undoubtedly going to be the first person this country will ever call “Madam Vice President.” And if Harris continues to send messages through her clothing over the next 4 years, her sartorial statements will be loud enough to drown out the noise.