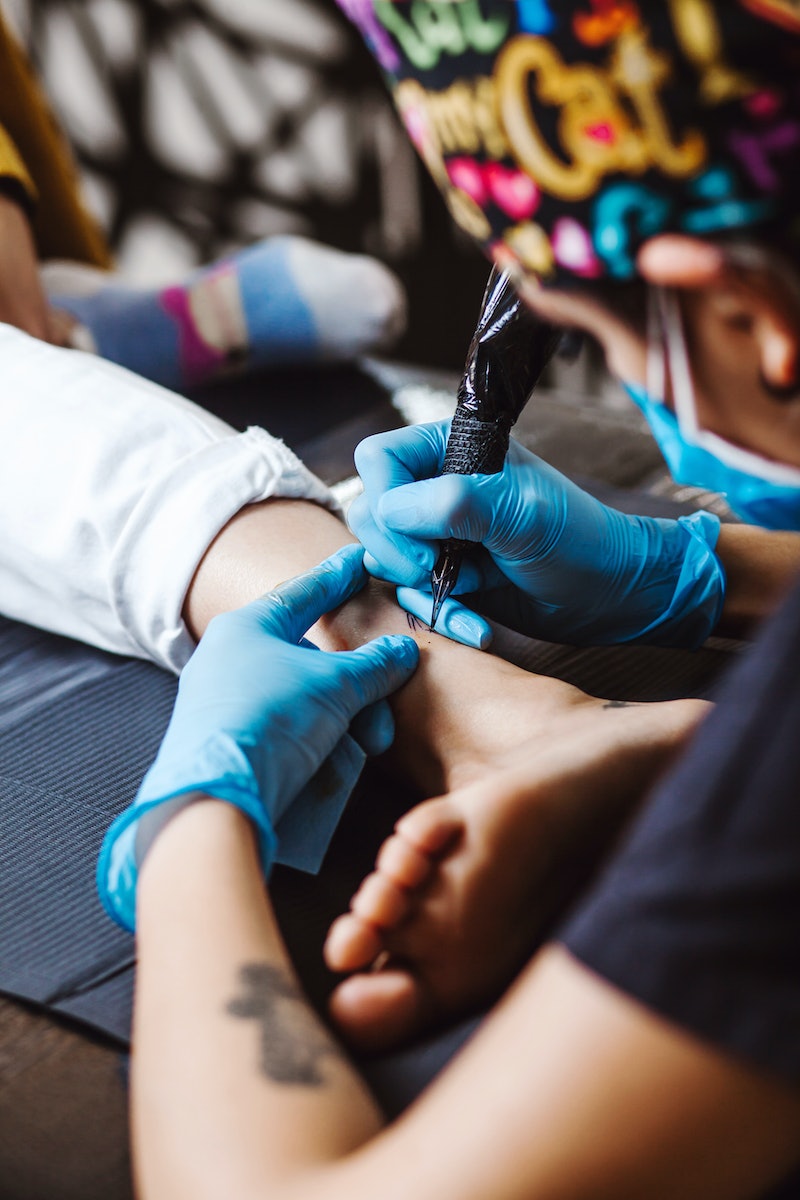 In the market for fresh ink? Can’t blame you — with all the incredible tattoo ideas out there, from micro designs to cool patchwork tats, there’s a smorgasbord of body art inspo available. Whether you’re a first-timer or an ink enthusiast, it can be helpful to take a peek at a tattoo pain chart before you book an appointment.

The colorful graphic can be useful in highlighting certain areas of the body that can feel particularly painful during the tattooing process. Though tattoo pain charts can vary, for the most part, they consist of an illustration featuring both the front and the back of a body. Colors like blue, yellow, orange, and red are used to indicate different levels of pain (and there’s often a legend included, too, which will show you what each color means). Feel free to ask your tattoo parlor which pain chart they use; more than likely, they’ll have one.

It’s important to note that while generally useful, tattoo pain charts aren’t a one-size-fits-all formula. According to Adam Suerte, tattoo artist and co-owner of Brooklyn Tattoo, it’s wise to consider a few external factors as well, such as your pain tolerance, whether or not you had sufficient sleep the night before your tattoo appointment, and if you’re feeling unwell that day. “Even not being in a good mood can affect how one deals with the discomfort of getting tattooed,” he adds. What’s more, if you go for an intricate tattoo that takes a long time on an “easy” part of the body, it can eventually become as painful as a quick tattoo on what’s considered a “painful” spot.

In assessing the above image of a popular tattoo pain chart, Suerte and Shaugnessy Otsuji, tattoo artist and founder of Studio Sashiko, agree that it’s mostly accurate. “[It’s true] that the chest, sternum, joints, shins, and feet can all be painful to get tattooed,” Otsuji says. The pain is greater in those areas because there isn't a lot of matter separating the skin from the bone — in other words, they lack a “cushion” of muscle and fat — adds Suerte.

But both artists tell Bustle that the ideal tattoo pain chart would feature more enlarged sections and greater detailing, especially in specific areas like the front inner thigh, the back of the knee, most of the stomach, smaller, bonier regions like the fingers, toes, and ankles, and the lower back. In terms of the latter, Suerte says it can be “extremely painful” to get a tattoo there. “Basically, the stencil is put on while the client is standing up, as that’s the way the tattoo will mostly be viewed. Then they’ll sit and bend forward to get a good stretch, and the stencil will enlarge to be 150 percent of the size of the original tattoo.” With a lower back tattoo, the artist is essentially tattooing an elongated version of the image so when the client stands up again, the image retains its original shape and size, he explains. “Tattooing the larger, stretched version of the image — as well as the skin being stretched thin — can be really painful.”

Nevertheless, it’s true that body parts that are commonly considered to be painful are often the most desirable areas to get inked, says Otsuji. “I think there’s definitely an element of shock value to consider when you receive a tattoo in a painful area such as your kneecap or your underarm,” she adds. “When others see tattoos on these parts, they can usually imagine what it might feel like to get tattooed in the same spot.” But painful parts can [also] be popular with people who get tattooed regularly simply because they’ve run out of space, says Suerte. “It’s all pretty relative.”

If you’re still craving some fresh ink in a particularly sensitive area (like the lower back, which has seen a resurgence since the Y2K era), note that there are ways to minimize the pain. Otsuju suggests utilizing a water-based topical anesthetic, like Zensa Numbing Cream, which is especially helpful during longer sessions.

Regardless of where you decide to opt for a tattoo, a tattoo pain chart can be helpful in determining which parts of the body are generally the least or most prone to a tattoo needle. “[It’s] a fine way to explain to someone who hasn’t been tattooed before what to expect,” says Suerte, “but as they get tattooed more, they will realize there are other factors that will determine their comfort level.”