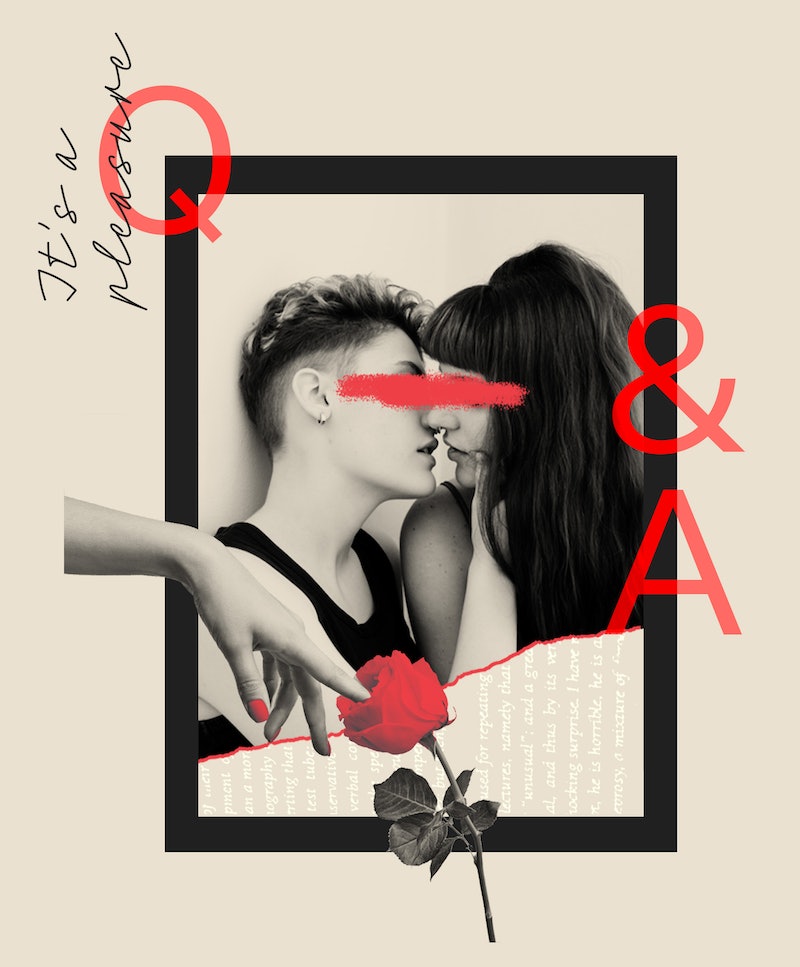 Thais Varela/Stocksy
By Sophia Benoit
June 9, 2022
It's A Pleasure

Q: My ex and I were only together for a month and some change but we were friends for a while before acting on the romantic feelings we both felt for each other. I deeply cared for her and I believe she cared for me too, as the decision to break up was not an easy one for us.

She was a questioning woman and I am queer. I was going to be her first everything with a woman, so naturally, I was hesitant and kind of resistant. But she kept telling me and showing me just how interested in me she was. Her words were backed up by actions, so I let my guard down and we had a beautiful and, for the most part, successful relationship. But she soon started to realize that there were some things that she just couldn't see herself doing. She went from enjoying the little intimate moments we'd shared to having this pit of uneasiness and anxiety every time we so much as touched. Basically, she realized she was straight and I affirmed her straightness. I was so hurt because she made me feel safe enough to tear my walls down and then she became the reason I had to build them back up again.

We tried to be friends almost immediately after the breakup because we kinda made a pact to save the friendship no matter what, but I quickly realized that I could not be friends with her and I tried to get some space. But I failed. I still spoke to her as much as I could — to my own detriment — and saw her every day because we’re at the same university. But I did feel all my emotions out, I did not deny myself space to feel the hurt, and while I was doing this, I naturally stopped talking to her as much and saw her less because my schedule changed. So I feel like I was able to get over her.

Now, I'm talking to someone else; it's going great. We've hung out quite a bit and have made it very clear to each other about how we feel and where we want things to go. But there's a part of me that can't shake the feeling that I’m moving on too fast. There are people in my life who think I'm still with my ex. I'm not the announce-y type, and I don't feel the need to clarify things. But I also know how secure and stable I feel with this new person and how easy it’s been with her. Is it too soon or should I not overthink it and enjoy my time with this new person?

A: Very few things on Earth have an appropriate, concrete, set timeline. There isn’t a big book somewhere with official information about how soon is too soon to move on from a relationship or how long is too long to hold onto someone. I think a huge part of this is because time does not equal feeling. Yes, there’s intimacy built into being with someone long-term, but there are relationships that last decades that don’t carry an ounce of what a week-long fling did. Some things are going to burn out quickly while some feel like they’ll be in the background of your life, albeit quietly, forever.

To me — which means anyone is welcome to feel otherwise! — a month of dating is not all that long. That isn’t to say it didn’t come with very big feelings, perhaps even love. It’s great that you realized that you were not a compatible couple that early on, although I’m really truly sorry that this breakup came at your expense, that someone seemingly used you to figure out their attraction. That’s unfair and upsetting. But I’m happy that the relationship ended when it did. Frankly, it seems like the relationship was very one-sided in two different ways. In one sense, it was one-sided in that your attraction to her was clear and secure and she couldn’t give you that, and in the other sense, only her needs were being met and her questions being answered. That is, simply put, not great.

So it doesn’t come as much of a surprise to me, given the short timeline of your dating and the lack of compatibility (and perhaps compassion), that you were able to feel your feelings and be ready to date someone new again. It’s also fine, if occasionally uncomfortable, that not everyone in your life knows that you and your ex broke up and you’re with someone new. For months after I started dating my boyfriend, well-meaning people asked how wedding planning was going because he’d been engaged before and they thought I was his ex. It was a little awkward, but it was fine. That’s life! Occasionally you ask someone about their ex! It happens. It’s not some grand sign that you’ve done something wrong or that there is judgment. You don’t need to be announce-y or to send out a quarterly newsletter updating people on your romantic endeavors. Love who you love, work on the relationship you’re in, and go from there.

Now, this is an advice column and I would be remiss to offer only comfort and affirmation without a little dollop of suggestion. And I admit that this is based on my own ego-driven bias, I’m sure. (Most things are, right?) But I strongly suggest to everyone — really, I tell everyone this all the time — that after a relationship ends, they give themselves a break. A real break, a break where they have no romantic attention from anyone. For some of us (myself), we don’t need to impose a break because these lulls occur quite naturally, however, for other people (my best friend, for example), it’s easy and natural to fall right into the next person’s orbit. And while love is the most delightful thing there is, and early romantic attraction is the cotton candy of love, there’s a lot to be said for not leaning on the attraction of others to build self-worth. It’s very, very difficult to do — to build up your own self without any romantic reflections back. But I think it’s a project worth undertaking from time to time. Because often the people we love alter us, and if you don’t take little breaks to remind yourself of who you are and why it’s easy to become whatever the person you’re with wants. Of course, none of us exist in a vacuum — the people we love, whether friends, family, or romantic partners, make up a huge part of how we live and what we want — but it’s easy in romantic love to change yourself to fit into someone else’s life.

Now, of course, you can plan to take any kind of break or pause you want and then you meet someone lovely, lovely, lovely and there’s no choice. What are you going to do? Not fall for them? No, of course not! Sophia, you might be thinking, it’s kind of too late for the advice you just gave! But if you can’t take an actual break from love and attraction, then take stock of your patterns. My point isn’t to stop love in its tracks or to end things for the sake of being alone. It’s to try to encourage people to learn about themselves, to be curious as to why going quickly into another relationship feels so good for them. It's worth interrogating, I think. It’s worth figuring out about yourself. And maybe you find out, “Yeah, I’m the kind of person who jumps from relationship to relationship” (although again, I don’t think a one-month relationship has to count if you don’t want it to), but maybe you find out why.

More like this
I'm 38 & Single. Why Can’t I Find A Serious Relationship?
By Sophia Benoit
8 Flirty Games To Play Over Text With Your Crush
By Lexi Inks
35 Sexy Texts To Send Your Partner
By Griffin Wynne and Carolyn Steber
My BF Wants To Stay Friends With His Ex Primary Partner. What Do I Do?
By Sophia Benoit
Get Even More From Bustle — Sign Up For The Newsletter