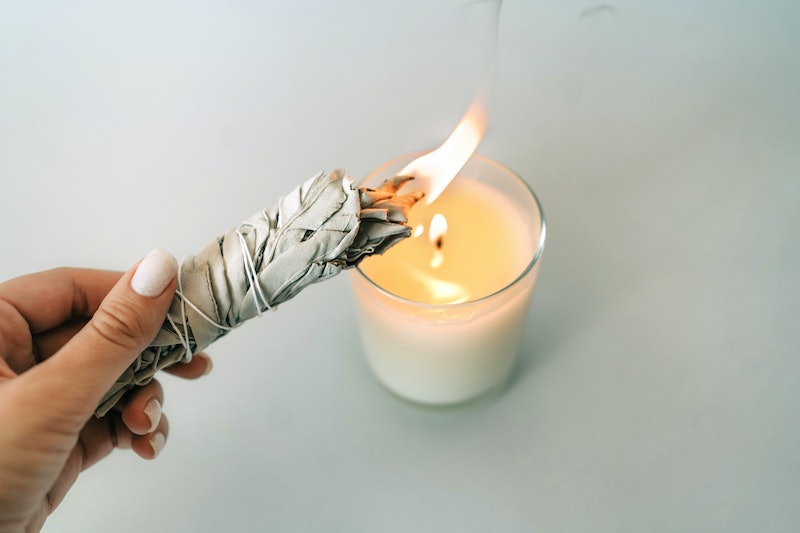 The past few years have certainly left many folks with the desire to rid their homes of negative energy. Smudging, also known as saging, has become a trendy wellness practice that folks use to cleanse their spaces — be it a bedroom, an entire home, or even a car. But if you tend to poke around smoke cleansing social media circles, you've probably heard people ask (and might be wondering yourself): Is burning sage and smudging cultural appropriation?

The plant sage, or Salvia, grows all around the world in different colors and variants. Culinary sage (the kind you use in butternut squash and roasted chicken dishes), also known as garden sage, originally comes from the shores of the northern Mediterranean region. However, what most people are referring to when they talk about the popularized practice of smudging is white sage (Salvia apiana).

White sage grows naturally in the southwestern United States and northwestern Mexico and is particularly found along the coast of Southern California and in the Mojave and Sonoran deserts. Though not the only sage native to North America, white sage is by far the one most frequently used and sold by the wellness industry. It’s also a sacred herb to several Indigenous communities, including the Lakota, Cheyenne, and Navajo. The Chumash people, for instance, who are native to central and southern coastal regions of California, use white sage in healing sessions to purify the central nervous system.

Wondering whether burning sage is cultural appropriation is a fair question — long story short, burning sage is problematic for a few reasons, the biggest being cultural insensitivity and environmental unsustainability. If you're not Indigenous and therefore hesitating to strike a match to cleanse the bad vibes out of your apartment, here's what you need to know about burning white sage.

Smudging is distinctly Indigenous. It’s an important ceremonial purifying ritual or prayer created and practiced in many North American Indigenous cultures. And it doesn’t specifically refer to the burning of white sage, either. Different Native communities use different medicines for smudging depending on where they are from, and not every culture uses white sage or smudges. The practice has a long and rich history that extends way before white witchy practices brought it onto Instagram feeds near you. In fact, before smudging was popularized, it was illegal — at least, for Indigenous folks — and often violently suppressed.

“It was illegal for Natives to practice their religion until 1978 in the U.S., and many were jailed and killed just for keeping our ways alive, including my great-great grandfather,” Ruth Hopkins, a Dakota/Lakota Sioux writer, tells Bustle. Smudging sage was part of those banned religious practices. Today, Native people are still fighting to be able to perform these ceremonies in hospitals.

Because of all that complicated history of sage burning, when non-Native people use white sage to "smudge" their homes or other spaces, it infringes upon the cultural importance and authenticity of the ritual and prayer — simply, it’s cultural appropriation. The practice of smudging, therefore, should not be taken lightly, according to Dr. Adrienne Keene, an assistant professor of American Studies and Ethnic Studies at Brown University, author of the blog Native Appropriations, and citizen of the Cherokee Nation.

“That smudge stick represents the deep pain, sacrifice, resistance, and refusal of Native peoples. It represents a continuing legacy of marginalizing and punishing Native spirituality,” says Keene. “So when our religious practices are mocked through these products, or folks are commodifying and making money off our ceremonies, it’s not about who has the ‘right’ to buy or sell. It’s about power.”

Instead, advocates say non-Native people can learn to cleanse their spaces in ways that are culturally and ecologically sensitive.

Thanks to the recent trendiness of smudging, white sage is in high demand. The demand has become so great that many Chumash people (of what is now Southern California) are concerned that the plant is being overharvested. The United States Department of Agriculture (USDA) says that white sage has important medical benefits — it is used to cure colds and aid postpartum healing — and it’s a crucial part of the surrounding ecosystem.

As Keene explains, overharvesting white sage — in addition to the threat of increased wildfires and urban development — endangers Indigenous peoples’ ability to access and use the wild plant in the ways they and their ancestors have done for thousands of years. But some brands and shops continue to sell white sage, despite Native communities speaking out against it. “It’s exploitative and amounts to silencing Native voices and erasing our cultural heritage,” Hopkins says.

For Hopkins, the appropriation of white sage is made worse because the plant is often not being harvested correctly. “When using medicinal plants, it’s important that the plant is used sustainably. When we pick sage, we always leave the root and say a prayer of thanks for our harvest. This is as much a part of smudging (or saging) as burning the plant is,” Hopkins says.

In other words, it’s important to leave the root, because that’s how the plant grows back. If someone is harvesting white sage and doesn’t know how to properly do so, they’re preventing more plants from growing and thus endangering the plant species.

White sage has become particularly popular with those who practice witchcraft or witchcraft-inspired wellness rituals. Sage, however, is not historically part of European witchcraft, from which many modern day witch practices stem.

If you have used herbs to cleanse your space in the past and enjoy the ritual, you don't have to give it up in order to do so in a culturally conscious way. Smudging refers to a specific cultural and spiritual practice, but smoke cleansing offers an alternative to smudging for folks who aren't Indigenous. This form of cleansing can look a bit like smudging, but it’s just the simple act of burning herbs, wood, incense, or other safe-to-burn materials that possess cleansing properties. The smoke is then waved over the area you want to cleanse.

Many cultures have historical and spiritual practices connected to smoke cleansing — everything from herbs and woods to incense and roots. For example, frankincense and myrrh were burned in ancient Egypt for prayer, and rosemary was historically burned in hospitals in France in order to clear the air of infection. It may even be personally fulfilling to find out if and what your ancestors burned for cleansing. But unless you are a descendant of Indigenous North American people, it likely wasn't white sage that they were burning, according to Keene.

The general act of smoke cleansing, however, is not inherently spiritual or specific to a certain culture in the way that smudging is. If burning incense, herbs, or wood is part of your self-love practice and inner wellness work, there are safe-burning alternatives to burning sage for smoke cleansing, including lavender, pine, thyme, and cloves, each of which has its own unique properties and is not environmentally endangered.

As a note, if you're browsing your fave place to buy herbs and look at the options for smoke cleansing next to white sage, you might find Palo Santo ("holy wood” in Spanish). But you may want to hold off on buying that, too. Palo Santo sticks have been getting more popular as an alternative to sage, but buying this Central and South American tree bark used by Amazonian tribes can also be harmful, in similar ways to white sage. Palo Santo has been added to the International Union for Conservation of Nature’s (IUCN) list, because though the tree is not yet nearing extinction, its recent overharvesting can put it on that path.

It's important that in the process of any cleansing you're respecting Indigenous cultures and the ecosystem. That may include educating yourself and others about white sage, appropriation, and smoke cleansing; harvesting your own sage or other herbs sustainably; contacting brands to ask them to stop selling white sage without giving due to Native cultures; or using other plants entirely. Being intentional about how you implement this practice in your life — and being mindful about its origins and significance — is helpful for everyone.

Dr. Adrienne Keene, assistant professor of American Studies and Ethnic Studies at Brown University, author of the blog Native Appropriations, and citizen of the Cherokee Nation

More like this
Paula Sutton Is Instagram’s Queen Of Cottagecore
By Shahed Ezaydi
Here's How To Practice Self-Love In Small Ways Every Day
By Mackenzie Sylvester
What Dreams About Being Lost Mean, According To Experts
By Carolyn Steber
What The History Of Pride Month Means For Celebrations Today
By Jay Polish
Get Even More From Bustle — Sign Up For The Newsletter