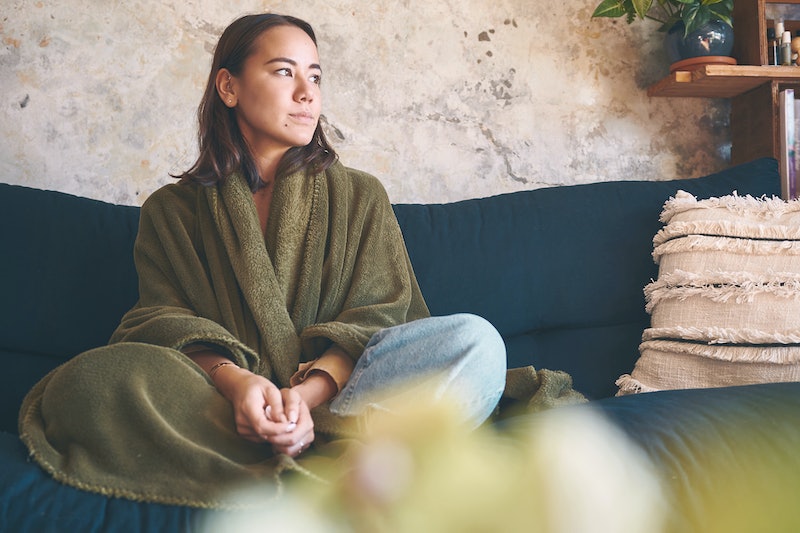 How do you know when your relationship is over? Having relationship burnout is never easy to admit, especially if you've invested a lot of time and energy into making it work. Of course, you needn’t be flippant about deciding to ditch a long-term relationship; but it's important to know when to call it.

If you've had numerous hard conversations and heart-to-hearts, maybe even sought out couples counseling, but you know deep down that your heart isn't in it anymore, there’s no sense staying in a relationship that’s dead in the water. No matter how much pressure there is from your parents, friends, or even from your significant other, to make it work, sometimes the healthiest thing to do is move on.

Here are seven signs that you're totally burnt out on your relationship, and that it might be time to just let it go.

When your partner’s idiosyncrasies no longer charm you, and you find yourself constantly adding their habits to an ick list in your head, that could be a sign you’re burned out on the relationship.

Sometimes, airing your grievances instead of bottling them up can diffuse the situation. “But, when you’re at that place where you’re not willing to talk about it anymore, or even bring it up, that could signal [relationship burnout],” Tamara J. Green, LCSW and loving relationship expert, tells Bustle

2. You’re Burned Out On Talking Through Problems

Healthy communication is essential to a lasting partnership, whether it’s talking through problems or just connecting with each other. “All relationships, healthy or not, are going to have issues come up,” says Green. “Healthy ones, you actually communicate what’s going on, and you listen.”

But when you’ve lost the energy to talk it out with your partner, and actually hear them, that’s a clear sign you’re no longer invested in making it work, according to Green. Moreover, if you don’t want to talk because you no longer feel a connection, that could be a signal to move on to someone who actually excites you.

A certain amount of conflict is normal in any relationship, and can even be a positive indicator that you’re still invested in working on the dynamic. But when fighting devolves into blind yelling, and venting, where you’re no longer listening to each other and can’t seem to see eye to eye, that’s a bigger cause for concern.

“Fighting, especially if there wasn’t fighting in the beginning, usually indicates that one or both people do not feel heard, and so they yell to get the other person to hear them out,” says Green. But when it’s ongoing and doesn’t lead to better communication, or some sort of compromise or resolution, it might be time to throw in the towel.

4. The Idea Of Spending Time Together Makes You Feel Tired

Carving out time for yourself when you have a partner is really important: you need space and autonomy to make sure you’re getting all your needs met and to prevent feeling resentful. But if you find yourself actively avoiding spending quality time with your boo because it makes you feel annoyed or tired — and taking alone time to recharge doesn’t help — that's a sign something is wrong. “[Avoidance] is a form of non-communication with each other,” explains Green. “Instead of doing the healthy thing, or scary thing, and talking it out, you come up with ways to not spend time together.”

5. Your Eye Is Wandering

A wandering eye can be totally normal and even healthy. People have different boundaries for what they consider cheating, but it’s natural to find other people attractive. If it's gone beyond what's normal for you — if you're constantly fixating on others, flirting, imagining running off with the barista — you may have mentally checked out from your current relationship, and are ready for someone or something new.

6. The Sex Is Meh... Despite Trying To Spice Things Up

Sex drives have their ups and downs — libido ebbs and flows depending on many factors, from mental health issues, to sleep problems, to general life stressors. But, if even after trying to get your sex life back on track and mix things up with your partner, you’re no longer feeling the attraction, it could be time to move on. “Even in long-term [partnerships], healthy relationships are like an ongoing love affair with each other,” says Green. “If you’re not having that, then it could be a sign that something’s really wrong.”

7. Talking About The Future Makes You Queasy

“If future plans are being avoided seriously, that’s a big sign,” says Green. “When people are dating and not looking ahead to the future, I tell them to get out, it’s not worth it.” So if you're with someone and the idea of planning a weekend away in a few months makes you uneasy? Better to get out than to commit to something when you simply don't want to do.