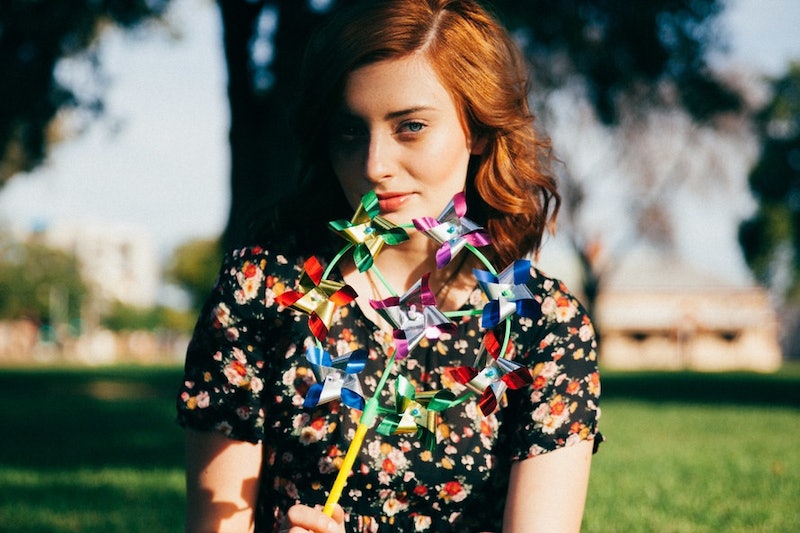 Not to make you super paranoid, but manipulation is everywhere. It can happen when you buy a car, when you fight with your partner, and even at work with your demanding boss. That's why it's so important to be able to spot someone who is manipulative, as it can really save you some drama.

Just as an example, let's talk about buying a car. When you go to the dealership, a salesperson is probably going to try their best to manipulate you. They'll "sweeten" the deal, throw you some low prices, and try their darndest to get you to buy a car at the greatest profit to them. It's gross and sneaky, but it happens to everybody.

In fact, these types of mental games are pretty common, and can also crop up with friends, family, and partners. So what kind of manipulation is OK and normal, and what isn't? As Preston Ni, M.S.B.A., said on Psychology Today. "Healthy social influence occurs between most people, and is part of the give and take of constructive relationships. In psychological manipulation, one person is used for the benefit of another. The manipulator deliberately creates an imbalance of power, and exploits the victim to serve his or her agenda."

The word to take away there is 'exploitation,' and that's what you should try to avoid. Being the victim of manipulation doesn't feel good, whether it's with friends, family, partners, or salespeople. So to help prevent it, keep an eye out for these signs that someone is manipulative.

1. They Will Guilt Trip You

Since manipulation is all about being powerful, a manipulative person will do anything they can to keep you feeling confused and weak. Often times, they do this by scrambling your brain with weird apologies and guilt. "A manipulator has trouble accepting responsibility for their behavior, and often if you call them on it, they’ll find a way to turn it around to make you feel bad or guilty," said certified coach Barrie Davenport on her blog Liveboldandbloom.com. Since it gets messy, the manipulator often comes out on top of the argument — right where they want to be.

2. They Ignore Your Input

In order to get his or her way, a manipulative person may sneakily — and conveniently — assume you agree with everything they say. "Manipulators often voice assumptions about your intentions or beliefs and then react to them as if they were true in order to justify their feelings or actions, all the while denying what you say in the conversation," said Darlene Lancer, JD, MFT, on PsychCentral.com. "They may act as if something has been agreed upon or decided when it hasn’t in order to ignore any input or objection you might have." Sneaky indeed.

3. They Don't Give You Much Time To Decide

Unless you are in the middle of a heist, or other time-sensitive situation, there is usually time to think things through before making a big decision. So be wary of people who pressure you for an answer, especially if money is involved. "This is a common sales and negotiation tactic, where the manipulator puts pressure on you to make a decision before you’re ready. By applying tension and control onto you, it is hoped that you will 'crack' and give in to the aggressor’s demands," Ni said.

Unresolved arguments are common in unhealthy relationships, mostly because they are pretty convenient for whoever is getting their way (i.e., the manipulator). As Suzannah Weiss said on EverydayFeminism.com, "If conflicts from days, weeks, or months ago still bother you even though you’ve discussed them with your partner, it’s possible they manipulated you into believing the discussion was over before it was." Try not to fall for this.

5. They Undermine Your Self-Confidence

This form of manipulation is classic, because no one is more malleable than someone with zero confidence. That's why manipulators will do whatever they can to knock you down, and make you feel less-than. "Emotional manipulators seek out the vulnerabilities in people in order to exploit them. In fact, they may consciously or unconsciously create relationships with people who are the most vulnerable and willing to be controlled," said Davenport.

6. They Force You Out Of You Comfort Zone

Again, manipulators want to retain the upper hand. Doing so is always easier if they can get you somewhere uncomfortable — AKA out of your comfort zone — either physically, emotionally, or financially, according to Weiss.

7. They Butter You Up With Small Requests

Manipulators also often ask for reasonable favors, only to follow up soon after with their real requests. The idea here is to get you saying "yes" so you'll have a harder time going back on your promise. But if you object, manipulators will often turn the tables on you so that they’re the injured party, according to Lancer. Once it's all about them and their complainants, you'll be on the defensive, and then they kind of win. How annoying is that?

8. They Offer The Silent Treatment

If you've ever been given the silent treatment, then you know how manipulative it can be. As Ni said, "The silent treatment is a head game where silence is used as a form of leverage." And it totally works. Since the other person has firmly planted themselves in a place of power, it's normal to feel you have no choice but to end the madness by giving into them.

9. They Pretend To Be Concerned

This one is especially creepy, in my opinion, because it involves fake feelings. The manipulator will display some fake concern for your well-being, all in an effort to undermine your decisions and confidence, according to Lancer. So if a friend or relative is suddenly, unduly, concerned about you, this could be what they're up to.

Sometimes people play dumb in order to get out of things. They may act as if they don't understand your request, thus letting themselves off the hook. Other times, they may pretend to not understand as a way of shaking your confidence. "Some children use this tactic in order to delay, stall, and manipulate adults into doing for them what they don’t want to do. Some grown-ups use this tactic as well when they have something to hide, or obligation they wish to avoid," Ni said. And, unfortunately, it often works.

In the same vein as playing dumb, people sometimes go the passive-aggressive route to get out of things, or to get their way. For instance, a partner may conveniently forget to pick up your dry cleaning as of way of making you mad. As Lancer said, "Forgetting 'on purpose' conveniently avoids what you don’t want to do and gets back at your partner ... Sometimes, this is done unconsciously, but it’s still a way of expressing anger." Either way, it's incredibly unhealthy.

In fact, no form of manipulation is healthy. But keep in mind, it's not always done consciously. Some manipulative people have no idea what they're doing, while others are way aware. That's why it's helpful to recognize the signs of manipulation, so you don't get used, duped, or sucked into the drama. It's just not worth it.