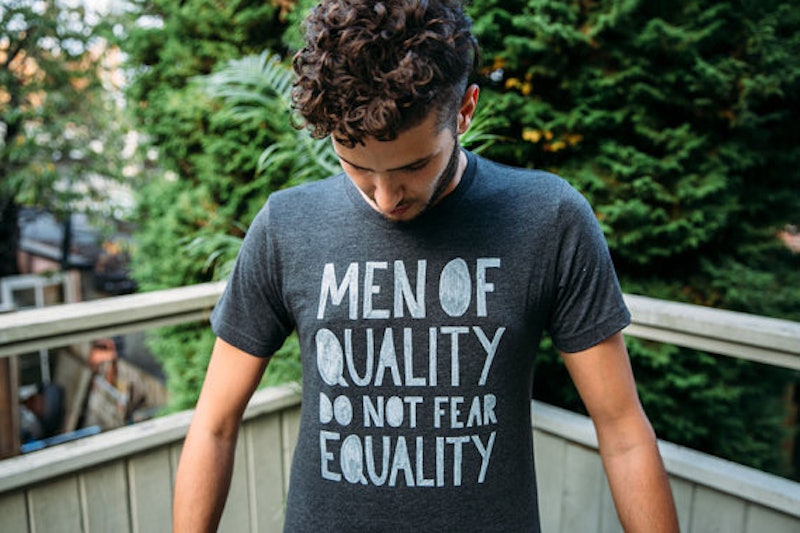 Over the years, I've talked extensively about feminist issues with the people in my life, and have made a lot of them pretty uncomfortable with my candor in the process. I'm not sure why this is, though, because feminist issues are really just human rights issues — and I've never met a person who claims not to care about human rights. Perhaps feminist issues aren't taken as seriously by non-feminists because they directly affect women, but even this excuse makes zero sense to me, because women are humans. (Additionally, why anyone wouldn't want to be labeled a "feminist" I will never understand.)

So the next time you come across a self-proclaimed non-feminist, or if you just need a little motivation to keep being your fine feminist self, remember that feminist issues are not just about women's rights — they're about human rights. The distinction only exists because women's rights have so clearly not been seen as basic human rights in the past, and still are not taken as seriously as they should be. Here are five feminist issues that everyone should care about.

It is simply not OK that women are paid less than men for doing the same exact work. The majority of women in the U.S. make an average of 78 percent of what their male coworkers make for the same jobs; for women of color, that percentage drops even more. Black women make an average of 64 percent of what their white male coworkers make, while Hispanic women make about 58 percent of that baseline. How is this just an issue for feminists to care about, when it's so clearly a basic human's rights issue, and one that clearly intersects with structural racial inequality?

Equal pay for equal work should not be reserved for feminist concerns. This is an issue that everyone should be concerned about, because equal pay doesn't just affect women; it affects families, too. Women who make an average of 78 cents on their male co-worker's dollar will end up losing out on about $10,000 per year. That's $10,000 that they could spend on childcare, healthcare, and living expenses. Having unequal pay doesn't just suck for women — it cheats children and families out of better lives.

Rape culture is rampant in our society, and everyone should consider it their problem. Wanting to decimate a society that has made slut-shaming, victim-blaming, and joking about sexual assault second nature shouldn't just be considered a "feminist issue." I mean, it is a feminist issue, because rape and rape culture mostly affect women (statistics show that one in five women will be raped in their lifetimes), but men and children are affected as well.

About three percent of American men (or one in 33) have been raped, and 15 percent of all sexual assault and rape victims are children under the age of 12. (Girls ages 16-19 are the demographic most affected, however; they are four times more likely to be victims of rape, attempted rape, and sexual assault than the general population.)

There's something very wrong with a society that tells it's people "Don't get raped" instead of "Don't rape." Everyone should care about putting a stop to rape and rape culture, because we've all been touched by it, directly or not.

The right to education is a basic human right, and everyone should be troubled by the fact that there are still 31 million girls kept out of school. Additionally, there are still so many corners of this planet where women are flogged, burned with acid, or (as in the case of Malala Yousafzai) shot for pursuing an education.

Beyond the fact that girls everywhere are entitled to an education, and are being kept from it in violent ways, there is the reality that women's education is just good economics. More educated women are generally healthier, earn more, have fewer children, and are able to provide better healthcare and education to their children than women who don't receive an education. Over time, education can help bring women and their families out of poverty, which ultimately benefits their culture, their nation's labor force, and society as a whole.

Period shaming is often considered a strictly feminist issue, but it shouldn't be. It's ignorant and offensive at best, and downright dangerous at worst. Since periods are so stigmatized, men are even less educated about them than women, which only works to create more ignorance and shame for everybody.

While women everywhere are conditioned from girlhood to feel embarrassed of this perfectly natural process, many women in non-Western countries often have it far worse. Girls are often encouraged to stay home from school and marry young rather than attend schools with unhygienic bathroom facilities — in fact, The New York Times reports that a shocking 23 percent of Indian girls dropped out of school once they reached puberty. Additionally, menstrual education and access to affordable sanitary napkins is so lacking that it's actually causing some real physical problems, such as serious infections, for many women around the world.

Again, women's access to education is key to all of our futures. And this means that period shaming isn't just a women's issue; it's a human rights issue that everyone should be working on.

Access to birth control and getting to have the final say over what happens to our bodies are fundamental human rights that women are still seeking. Society labeling these rights as strictly feminist issues has not helped with their progression, particularly since this should be considered just as much a "male problem" as it is a female one.

Men have every right to birth control as well, and there is a serious lack of options for them. Yes, condoms are 98 percent effective in preventing pregnancy, and they're extremely effective at preventing STDs. But aside from condoms, (which don't always work) withdrawal (which can be risky), and vasectomies, men don't have a lot of contraceptive choices right now, and they never really have. Fortunately, this will probably be changing very soon, as it should.

The point is that reproductive rights are for everyone, and unwanted pregnancies — and the federal defunding of Planned Parenthood — should be just as concerning to men as they are to women.