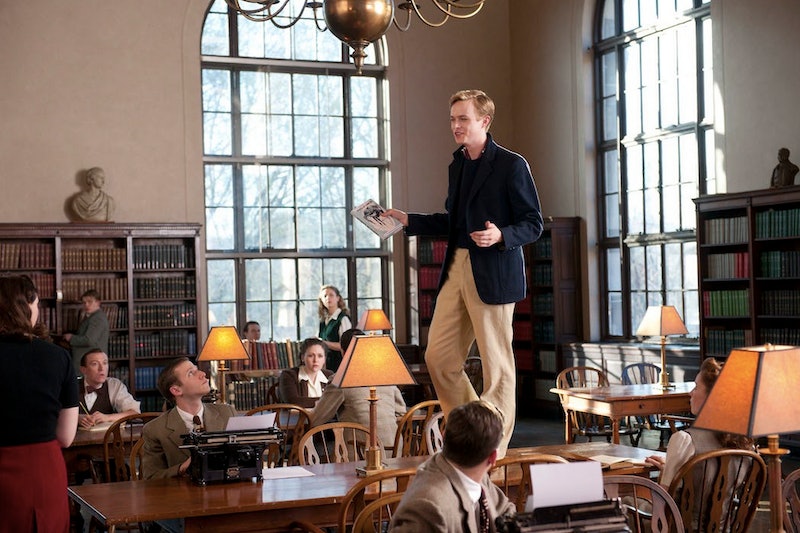 It’s weird watching older movies that show things like giant fax machines, doctors smoking cigarettes while talking to patients, and teary, romantic airport goodbyes right there at the gate to get on the plane. They feel like time capsules. Today, you have to say your teary airport goodbye outside on the curb as security screams at you to move your car, and if a doctor lit up a cigarette in the exam room, she'd probably be out of a job.

Thankfully, libraries full of books are not one of those ancient artifacts that you see in old movies and think, “Man, that seems dated.” If a character in a movie set in 2015 started riffling through an actual card catalog it might seem bizarre, since most everything today is digitized. Unless, of course, the librarian character is a rebellious Luddite who makes it her mission in life to save the mighty card catalogue, technology be damned! I wouldn't mind seeing that character, actually. So get to it, Hollywood.

There are some classic library scenes in movies, where detectives piece together the clues that will lead them to that “Aha!” moment and lead them to the killer! Or where invisible guardian angels listen to people’s innermost thoughts as they browse the stacks and read from aging library books.

In honor of the fact that libraries are (hopefully) here to stay, here’s a look at 13 of the best library scenes in film.

Early ‘90s “Queen of the Indies” Parker Posey plays Mary, a broke Manhattan party girl who likes drugs “that will make my unborn children grow gills.” When she gets evicted from her place she reluctantly takes a job as a librarian, and in between reorganizing the card catalog (which is so retro now), she whisper-screams eloquent, librarian-ish things like, “You don't think I'm smart enough to work in your fucking library?!” She’s basically a '90s version of Ilana from Broad City . When she starts to take her job seriously, it's pretty hilarious.

While you're waiting for the all-female Ghostbusters to come out, check out the original just for fun. There's a scene in a library where they see a floating apparition checking out a book, and proceed to argue about how they’re going to talk to it. Because they're professionals. Bill Murray steps up to the task and faces the floating old lady, saying, “Hello, I’m Peter. Where are you from, originally,” before he gets shushed by the ghost. Then Dan Aykroyd has a plan, which doesn’t work out so well…

This one happens to have two great library scenes. In the first, sexy writer Paul takes Holly Golightly/Audrey Hepburn (who is rocking an awesome bright orange coat) to the New York Public Library, and as they enter and stand in front of those old-school card catalogs, Holly says, “What is this place anyway?” Girl, come on. Later on, Paul finds Holly brooding and reading books about South America (she’s wearing very stylish, giant sunglasses of course) in the library, and professes his undying love.

Goldie Hawn and Chevy Chase were a pretty cute rom-com team back in the late ‘70s and early ‘80s, and in this one Hawn plays a San Francisco librarian who falls for a goofy cop. In one scene, Hawn’s shy librarian has to beat a crazy-eyed, white-haired kidnapper off with a bright yellow umbrella. It’s pretty ridiculous, in the best way.

Indiana Jones and the Last Crusade

There are the unmistakable lamps with emerald green shades, the bitter old librarian (this time played by a mustachioed fella), and, of course, glorious shelves full of books. Harrison Ford is trying to break the floor apart, and the librarian thinks all that banging is coming from the little stamp he’s using on the books. It’s not, like, sophisticated funny, but it’s a true Spielberg moment.

This futuristic sci-fi thriller is loosely based on a book called Make Room! Make Room! (you can see why they changed the title) and stars Charlton Heston as a detective in 2022 (seven years from now — yikes) investigating a murder. His buddy Sol remembers the good old days before everything got all dystopian, and inside a little personal library he tells Heston’s character about the days when there were actual books made of paper. So sad!

Passion in the stacks! Keira Knightley (in a badass emerald green dress, which perfectly matches those green lamps you always see in movie libraries) and James McAvoy get it on in a dimly lit library, and it’s hands down one of the sexiest — if not the sexiest — library scenes on film. That is, until they get a visitor.

The movie is dark and broody and of course so is the library. Morgan Freeman and Brad Pitt are trying to hunt down a brutal serial killer who uses the seven deadly sins as his clues. The dark and broody library scene is complete with those ubiquitous emerald green lamps. Freeman heads there after hours and tells the guards, “Never understand it. All these books… a world of knowledge at your fingertips. And what do you do? Play poker all night.” He then sits down and reads a bunch of books about the seven deadly sins and Catholicism. He also Xeroxes some important pages and gets closer to cracking the serial killer’s code. The music makes it very dramatic.

Marian the librarian (yes, really) gets serenaded by a dude who croons sexy lyrics like, “I need you badly badly madam librarian!” Marian is not having it though — she’s got way too many books to stamp. Until she starts dancing on tables...

The Thatcher Memorial Library looks and sounds like a crypt. It’s haunting and the lighting is gorgeous. The creepy place holds a manuscript with pages about the mysterious newspaper tycoon Charles Foster Kane. It’s one of the most ominous libraries on film.

This whole film is pretty much one long library scene (except when they’re running through the hallways of the school or crawling through the air ducts) and it’s also like the Citizen Kane of high school movies. Five students (the jock, the nerd, the princess, the outcast, and the rebel) spend a Saturday in detention (in the library!) and if you haven’t seen this classic, seek it out immediately.

One of my all-time favorite library scenes on film. This German movie is about a guardian angel that wants to become human after he falls in love with a woman. The angels wear black coats and they can overhear humans’ thoughts, and when two of them wander into a library they can hear a symphony of inner fears and desires. It’s pretty great. Don’t watch that Meg Ryan movie City of Angels (it was based on the German film) thinking you’ll get the same scene, though. Stick to the original.

So whether it’s Breakfast at Tiffany’s or Soylent Green, there are tons of great movie scenes that take place in libraries. Sometimes people are reading up on the seven deadly sins, and sometimes they’re declaring their undying love — the one you watch is up to you.

More like this
The 20 Best Audiobooks To Fall Asleep To
By Aoife Hanna and K.W. Colyard
Conversations With Friends' Endometriosis Scenes Are As Brutal As It Gets
By Ivana Rihter
Why The '365 Days' Sex Scenes Are Good, Even If The Movies Aren’t
By Arya Roshanian
Sadly, 'Fantastic Beasts: The Secrets Of Dumbledore' Isn’t Streaming — Yet
By Arya Roshanian
Get Even More From Bustle — Sign Up For The Newsletter