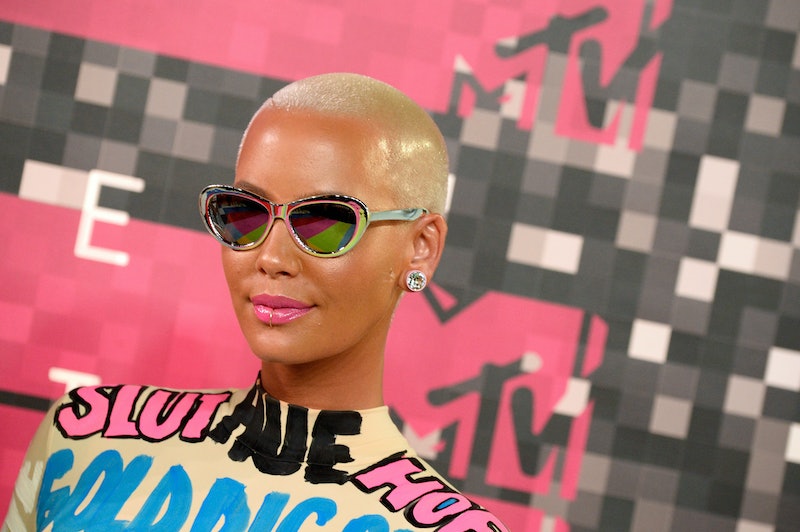 Unfortunately, none of us are immune to slut-shaming. Whether you're a celebrity, a high school kid, or just a normal lady who likes to rock the occasional sexy dress in public, we have all experienced slut-shaming at one time or a another, and it really sucks. Slut-shaming is judgmental and rude, but it's also just downright mean. If you've been slut-shamed before, then you already know there's nothing quite like that sickening feeling you get in your gut when some rando blatantly slut-shames you for dressing too "provocatively" or for not sitting, standing, speaking, or acting "ladylike" enough. It's horribly violating, and it can completely wreck your confidence and your day if you let it.

Yet somehow, slut-shaming is so accepted in our culture that we're actually encouraged to do it from childhood. It's incredibly backwards to me that our society considers it so OK to slut-shame women, but it gives me hope when I witness and/or hear stories of the awesome times people have called out slut-shaming. In fact, it makes me realize that we should all be calling out slut-shaming way more — because it really isn't rude to tell a self-righteous (or, to be fair, misguided) slut-shamer to mind their own business.

If you've ever been slut-shamed and no one had your back, or you've witnessed someone being slut-shamed and were too timid to stand up for them, then you should take inspiration from the following five times people have called out slut-shaming in 2015 — so far.

1. When Kelsey Schindl & Her Classmates Called Out Those Awful Prom Posters

I have so much respect for the gumption of this young woman and her classmates. It's not always easy to speak your mind, (especially when you're in high school) but back in May, Kelsey (the then-senior) called out her school for posting such clearly sexist, sex-shaming, and slut-shaming prom posters. Despite the fact that her first request to have them replaced with more gender-neutral posters was denied, Lincoln High School in Wisconsin still ended up removing the posters (thank goodness) after a photo of one went on viral.

If it weren't for Kelsey and her fellow students calling out the fact that, intentionally or not, their high school was slut-shaming it's female population, those posters probably would have stayed put. So, congrats high school kids, you're already braver than and smarter than most of us old people.

2. When Ali Fedotowsky Had Kaitlyn Bristowe's Back

Even if you (like myself) don't really watch The Bachelorette, you have probably still heard about how brutally Bachelorette Kaitlyn Bristowe was slut-shamed this summer for having sex with one of the guys she was dating (my stars!) on the show, Nick Viall. The whole thing was completely ridiculous, and it painfully highlights the double standard that exists between sexual activity and gender. I mean, the purpose of the show was for Kaitlyn to date men and hopefully find her husband, so sex seems like a given, right? Well, not according to the Internet.

Fortunately, former Bachelorette Ali Fedotowsky also thought slut-shaming a grown woman for having sex with someone she was dating was utterly ridiculous, and she took to her blog to say so. Here's a sample of what Ali had to say:

Let me just dive into this topic by saying slut shaming is NOT COOL! What is wrong with people?!?! I mean really. It makes me SO angry that there is such a double standard in this world when it comes to men and women having sex. I can assure you that Kaitlyn is NOT the first person to have sex with someone on the show. In fact, I would argue that 95% of the Bachelors and Bachelorettes DO have sex on the show. Sure, Kaitlyn did it before the infamous fantasy suite, but does that really matter?

I love when people call out slut-shaming, and I love it even more when women are there for other women. Go Ali!

Once again, I have so much respect for young women who aren't afraid to stand up for themselves and other young women — and this girl (whoever she is) did just that when she called out her school's slut-shaming, body-shaming, and typically sexist dress code back in May. Seeing young women who are self-assured enough as teenagers to call out the slut-shaming, body-policing adults in their lives gives me hope that the change we desperately need to see regarding how female students are sexualized just might be on it's way.

4. When That Old Lady Spoke Up & Instantly Became Everyone's Hero

On August 10, 2015, a man named Scott Sparrow recorded his experience of witnessing a spunky, old lady calling out a slut-shaming man on The London Underground — and I'm so glad he did, because now I have a new hero.

Evidently, the slut-shamer thought the woman sitting near the old lady wasn't dressed appropriately and needed to "have some self respect" when she dressed herself, but Old Lady didn't let his nonsense go unaddressed. Instead, she defended the younger woman, and simultaneously earned the admiration of Sparrow and the better part of the Internet. If you haven't already read it, here's Sparrow's full post to Facebook. Prepare to have your faith in humanity restored.

I am having such a wonderful day on the tubes I can't not share this story. Let me build the scene:Central Line between Oxford Circus and Chancery Lane, possibly St Pauls.To my right is sat a lady, 25-30, wearing a revealing dress. To my left is an old lady, almost dead is how old she is. Standing in front of us is a man, 50's, suit and tie, eyeing revealing dress. Suit leans over to the revealing dress lady and says "Have some self respect when you dress yourself"Revealing dress lady blushes to the colour of her almost not there dress.Old soon to be dead lady is having none of this and in a south london accent shouts out "She can wear or not wear whatever the fuck she likes, even if she was naked with a sign pointing to her fanny (she said fanny on the central line by St Pauls) and the sign pointed to her fanny which said ...PARTY CITY ALL INVITED...then that would still be none of your bloody business now fuck off back to your bored wife!"Red dress then hugs the walking dead and old suit walks off.

5. When Amber Rose Took A Stand Against Slut-Shaming & Simultaneously Slayed At The VMA's

I didn't watch the 2015 VMA's, but I did hear about the stance Amber Rose and her squad took against slut-shaming when they showed up on the red carpet, and it's given me a whole new respect for the celebrity. Rose has been called out by other celebrities such as Khloe Kardashian and Rose's former boyfriend, Kanye West, for working as a stripper in the past. She's been called a "gold digger" for being romantically involved with rich, famous men like Kanye West and Wiz Khalifa, too. But she's not afraid to stand up for herself (and really women everywhere) and her 2015 VMA's outfit proves it.

Slut-shaming is wrong, and there's no excuse for it — but if we don't start calling out slut-shaming more often, it's never going to get better. So, whether you're defending yourself, a stranger, or a friend, let's follow the lead of the above awesome people who called out slut-shaming, and speak up! Because shutting down slut-shaming is worth the risk of ruffling a few slut-shaming feathers.

More like this
5 Ways To Stand In Solidarity With Women In America From The UK
By Sophie McEvoy
How To Fight For Reproductive Rights, Based On How Much Time You Have
By Courtney Young
Bachelor Nation's Blake Horstmann Is Dating 'Love Is Blind' Star Giannina Gibelli
By Jake Viswanath and Radhika Menon
Why You're Seeing Green Bandanas At Abortion Rights Protests
By Lexi Inks
Get Even More From Bustle — Sign Up For The Newsletter