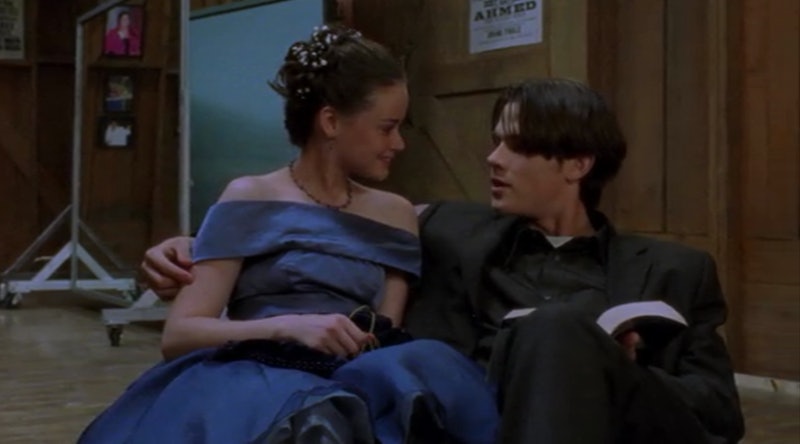 Earlier this year, the television gods graced us with the best possible gift: a Gilmore Girls reunion at the ATX Festival. The Stars Hollow crew getting together again was definitely a dream come true, and I lived vicariously through all of the amazing photos from the event. Believe it or not, it's officially been 15 years since Gilmore Girls first premiered on Oct. 5, 2000. Fifteen whole years since this wonderful show came into existence! That's a long time — that's how old Rory was back in season 1. The series is now old enough to attend Chilton. (Mind-blowing, huh?) Even though all that time has passed since the show started, there's one statement I will always stand by: Rory Gilmore and Dean Forester were the best couple.

Before all of the Team Jess or Team Logan loyalists start throwing a fit, let's examine the evidence. Remember Dean built Rory a freakin' car? Who does that?! Oh, just the best boyfriend in the entire history of the show. Although I'm adamant about this, I know a lot of GG fans aren't. While everybody can agree Luke and Lorelai belong together, Rory's true match remains up for debate. But I bet after you look back at these incredibly adorable memories, you'll switch to Team Dean, too!

Here's a round-up of Rory and Dean's 15 best moments, in honor of the show's 15th anniversary.

In the very first episode, Dean is so in awe of Rory's concentration when reading that he can't take his eyes off her. He knows that he needs to talk to her and introduce himself. It's adorable and not as stalkery as it sounds — I promise!

14. He Gets Rory's Rosemary's Baby Reference

"You're like Ruth Gordon just standing there with the tannis root. Make a noise." Rory says this the first time she interacts with Dean and she's surprised when he actually understands the reference. He tells her she's got good taste in movies, and it's proof that these two are a perfect pair.

When Rory clears out her locker to switch schools, she has a giant box of books. Of course Dean is such a gentleman and helps her carry it home. During that adventure, Rory gives him a tour of Stars Hollow and they talk about cake.

In "Cinnamon's Wake" (season 1, episode 5), the town gets together to mourn Babette's cat. It's more of a party, though. Dean shows up and tries repeatedly to talk to Rory. At the end of the night, he tells her he gives up, because clearly she's rejecting him. But to his surprise, she winds up saying she is interested, then she smiles and runs off. Awkward, but still so adorable!

After Rory's emphasis on extra-curricular activities causes some tension between her and Dean in season 2, they get in a fight. But he later apologizes and says he was jealous of Harvard — when really, he loves that she's so ambitious. They make amends and it's a sweet, supportive moment.

10. They Celebrate Their 3-Month Anniversary

Dean wants everything to be perfect, so he takes Rory to a fancy restaurant. He even orders her three different kinds of pasta, since she can't make up her mind.

OK, I know, it's not ideal that Dean was still married to Lindsay at the time. (That's why this doesn't rank higher on the list.) But it really is a pivotal moment for Rory, and I think it says a lot that this milestone happened with Dean.

8. Rory Asks Dean To The Dance

Rory heads into Doose's Market and helps Dean stack green beans before she works up the nerve to ask him to her dance. After some back-and-forth, he agrees to go — even though he's never been to a dance before and doesn't love the idea of dressing up in a coat and tie.

The dance goes well — for the most part. Dean stands up for Rory to Tristan, and they wind up shoving each other. (Not ideal.) But their slow dancing and fancy outfits still make this a great Rory and Dean moment overall.

6. Dean Made Rory A Birthday Bracelet

As a surprise gift, Dean shows up on Rory's 16th birthday and gives her a bracelet he made. He got the medallion and then tied the leather string. So sweet and crafty!

5. Dean Thanks Rory For Kissing Him

Although Rory spent a ton of time freaking out with Lane over the fact that she said "thank you" the first time Dean kissed her, it's incredibly cute when after their second kiss, Dean says "thank you" too.

As an anniversary gift, he builds her a car, so that she no longer has to take the bus all the way to school everyday. Best gift ever, or best gift ever?

Dean is officially inducted into the Gilmore club when Lorelai invites him over for movie night. They watch Willy Wonka and eat a ton of pizza. While it starts out a little rocky (and with Lorelai chaperoning), it's still an awesome first date.

2. Their First Kiss At Doose's Market

No moment is more precious than Rory and Dean's first kiss! First, he asked her to guess which hand he had a soda in and as she was rambling on, he just went for it. She was so flustered that she accidentally stole baking soda and ran all the way to Lane's house.

After a brief (albeit heartbreaking) break-up, Rory finally tells Dean she loves him when he visits her at Chilton. The moment is absolutely perfect, especially since she lovingly calls him an "idiot" for not realizing she cared sooner. Duh, Dean!

See, how could you not love these two? I rest my case — Rory and Dean forever.