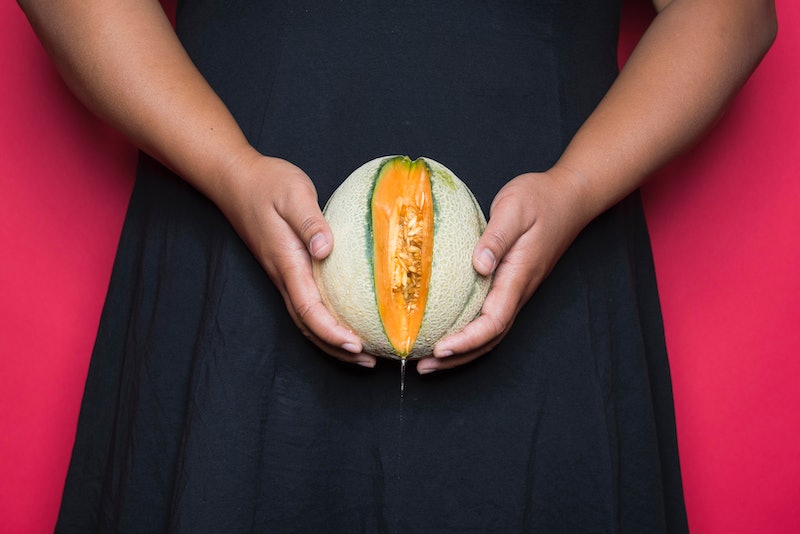 It doesn't take a genius to spot a vagina when you see one...or does it? Thanks to a new blog called That's Not A Vagina, it looks like we're all about to get a lesson in the proper anatomical terminology associated with your genitals — a lesson that is long overdue.

So what's wrong with calling it a vagina? Well it turns out that what most people call a vagina is actually the vulva. The vagina is part of the vulva, but referring to the whole shebang as a vagina is not correct. The blog owner, Dizzy — who also runs the sex toy review blog Toy Meets Girl — told the Daily Dot that although she learned the correct terminology in high school, she's been calling it a "vagina" just like everyone else.

"That's how misinformation works," she said in an interview with the Daily Dot. "It spreads and seeps into our consciousness to a point where we repeat things that we fundamentally know are inaccurate."

Dizzy said that after she began blogging for Toy Meets Girl, the misuse of the word "vagina" really started to annoy her. That's Not A Vagina was inaugurated on October 19, two days after Dizzy saw a tweet from a fellow sex blogger that joked about the vagina versus vulva inaccuracy.

There's way more to a vagina than you might think: There's a urethra, pubic mound, labia, clitoris, and more. Far from just being a semantic issue, however, Dizzy emphasizes that the problem stems from the poor state of sex education, and impacts us far more than we might realize.

Here are seven other crucial things that we all should have learned in sex ed, but probably didn't.

1. Sex Is Not Synonymous With Intercourse

2. Your Libido Isn't Influenced By Your Gender

As a teenager, it seems like everyone is running around with their hormones raging all the time, so the concept of having a low libido was pretty foreign. I don't know about you, but my sex ed program never delved into the idea of libido, so I was left to learn about sex drive from pop culture, which often portrays men as the initiators and women as the reluctant partners. However, it's unfair to assume that all men want sex all the time, or that all women never want sex. Bottom line? Everyone has a different sex drive, libidos can fluctuate, and we should all be understanding of that fact.

Although consent has become a hot topic as of late, it wasn't always so commonplace to hear about it. Many advocates for more comprehensive sex ed are insistent that consent should be a mandatory part of the curriculum, because it's so crucial to teach people the importance of enthusiastic, clear consent at a young age. Sure, we might know from watching Law & Order: SVU that rape is bad, but learning about the nuances of sexual assault can help young people understand the importance of getting a clear "yes" from their partner for each new level of sexual activity.

4. You Can Get STIs From Oral

STIs are probably one of the most talked about issues in sex ed, because they are the "consequences" for "bad behavior" and are, in some ways, used as a scare tactic in abstinence-only education. In reality, though, it's not realistic to assume that kids just won't have sex, so it's important to be honest about the ways unsafe sex can impact them. I didn't learn until I was an adult that you can, in fact, get STIs from unprotected oral sex — a scary fact that I wish I'd known as a teen.

We've all seen the movie scenes where giggling teenagers slip condoms down a larger-than-your-average-penis banana. While it's great to learn how to properly wear a condom, it's also important to note that there are many kinds of contraception, both internal and external, and all of these options should be laid out for teens. Teaching kids about the pros and cons of male and female condoms, IUDs, birth control pills, Nuva Rings, Depo-Provera shots, and more will give them a real sense of the choices they have, and can ultimately help them decide what route is healthiest and most effective for their own sexual needs.

6. Emergency Contraception Is Not Abortion

One thing sex ed fails to mention? There isn't one "right" kind of sex to have. Aside from the problems of being taught through a heterosexual lens, many sex ed programs also tend to focus on the consequences of sex rather than the fun, healthy aspects. While it's definitely prudent to keep things "appropriate" in a room full of minors, it's also unrealistic to assume these kids aren't having sex, and the best thing an educator can do for them is make sure they know about the importance of open, honest communication. If sex ed programs were open about all kinds of sex, people would grow up with a healthier view of how respectful, consenting sex should look.