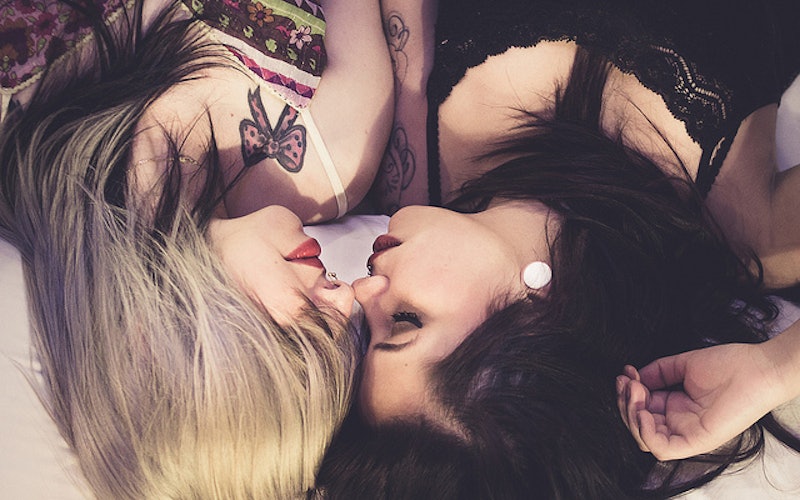 When do you have the best sex with someone? Is it the first time, when it can be giggly and butterfly-ish and silly and awkward and oh-so steamy? Or maybe the tenth or twentieth time you have sex, when you are more comfortable with your partner and their body? Or the hundredth? The thousandth?

Who can say? I certainly had no idea, so I turned to five experts for this one. Though they all had different answers, they were in agreement on one thing: It is, in fact, not the first time. "The first time you have sex with a new person is quite a nervous time for most," Rob Alex, who created Sexy Challenges and Mission Date Night with his wife, tells Bustle. "Usually that can be a beautiful experience; however, because of the nerves, we don't usually have the best sex."

Carlyle Jansen, the author of Author, Sex Yourself: The Woman’s Guide to Mastering Masturbation and Achieving Powerful Orgasms , agrees. "The first time is sometimes passionate and exciting, but not always as physically satisfying," she tells Bustle. This is especially true for women: "Many women especially need a sense of comfort and trust to fully let go, and so by the fifth time, there there is some comfort, communication and trust built up, with a willingness to risk saying what you want and letting yourself go fully." Sounds like a recipe for great sex. Here's when you're most likely to have the best sex with your partner, according to experts.

"Of course there are no hard and fast rules, but I would judge, based on my clients and my own personal experiences, that somewhere around the fifth to tenth time is the best," says Jansen. "You can't beat the newness of a relationship for endorphins," she says. In the beginning, thanks to all of the hormones pumping through your system, "even lousy sex can still sometimes feel pretty good."

It might take longer than five to ten times, she adds. "Some people might need more like 30 times, or several months, to really trust or let go." But if by that point you're still having trouble connecting, it's probably past time to say goodbye. "Hopefully if a lover is not responsive or respectful, you have ditched them quickly," she says, "rather than endure past the third or fourth time."

Generally these types of problems will come to light sooner rather than later. "Issues, hangups and conflicts can arise by the tenth sexual venture, and unless people are good at meeting them head-on (which deepens the connection and sex), avoidance and resentment can quickly derail the sexual pleasure for one or both partners," says Jansen.

"I would say that individuals start to get really comfortable with each other . . . after they have had sex together 20 to 40 times," says psychologist Nikki Martinez. "That range depends on the couple and their comfort level talking about these things." At that point, "the couple should feel close enough and connected enough to ask for what they need."

She agrees that it's not the first time. "The first time people have sex is definitely not the best. It is awkward, people are nervous, they are fumbling around, and it does not always feel pleasant." For excellent sex, patience is key. "The best sex comes with time and experience," she says. "When you are old enough, and comfortable enough in their own skin to know what they want, ask for what they want, and make sure that their needs are met: This is when it is the best for both parties." Something to look forward to!

"I would say the magic starts to happen after the thirty-third time," says Alex, aka the Guru of Getting it On. "We are very metaphysical, and the number three is powerful to us. We often find great things happen to us after the multiples of 33 in our love lives." Since I grew up in a rather alternative household and love all things metaphysical, I delighted in Alex's response. "There is no correct answer," he says, "each individual is different, as well as each time we make love."

"My personal belief, and my experience, is that when you are in a loving and passionate relationship, the sex gets better and better as time goes along," he says. "However, this doesn't just happen; it is a combination of learning and growing with each other, as well as having open communication." Like anything else in a healthy relationship, stellar sex takes a bit of work.

But it doesn't have to be unicorns and rainbows every time, he says. "Every sexual experience can't be the best — sometimes we have so-so sex, and that is OK. I feel a lot of people put too much pressure on their sex, and feel something is wrong when it is just so-so sex. If you want to have the best sex ever, some of the keys are to listen, learn and experiment."

"People also need to understand that great sex and intimacy doesn't just happen in the bedroom; it starts the moment you get up," he says. "Foreplay is an all-day event, and when you understand that, you can have a better chance at having the best sex ever tonight."

"I'd probably go with 50-plus times," says Caitlin K. Roberts, founder of To Be a Slut and cofounder of I'd Tap That. "I think the best sex you can have with someone will sneak up on you some random Tuesday afternoon, after you've both learned each others bodies, desires, fantasies, wants, needs, etc." I love how she puts this, and I totally agree. "You'll have all that information stored up, and there will be one day where you are just going at it, and everything aligns and comes into a beautiful, blissed-out moment of banging," she says. Werk!

This'll give many of us even more to look forward to! According to psychotherapist and neuromarketing strategist Michele Paiva, the hottest time you'll ever have sex with a partner is "10 years in," particularly in the morning, "when cortisol is higher." Specifically, says Paiva, the most mind-blowing sex happens when you're over 40. "When men are in andropause and women are in menopause," sex can get crazy hot, she says. "When men are in the height of andropause, normally beginning in their 40s, they begin to have more feelings of emotion, become more caring, less focused on the 'win' and competition." Interesting.

"Men who are in their 40s through 60s tend to view their relationships as more friendship-based, which is often more oxytocin-based," she says. "Men (traditionally, not globally) in their younger years desire sex more often, and focus less on being with the person outside of sex. As they age, they still desire, but they see more value in the partnership and enjoying the partner for all of the gifts she may offer."

This time of life brings similar, but different, changes for women. "Women in their 40s have hormonal shifts as well," she says. "Women have a feeling of more empowerment." At this point, they are more likely to be "comfortable with making requests, owning their desires and being more open."

Tell you what: This makes me feel better about aging. "Women in the peri- and menopausal years are more apt to feel free sexually," she says. At that point, there's no worry of pregnancy, "so sex is more freeing, more spontaneous," she says. Plus, communication might be better at this point too, she says. "I have worked with couples who do not even discuss their sexuality with each other, and the midlife years bring incredible discussions, and thus intimacy."

Youth, as usual, is wasted on the young. "Most of my couples that I work with who are new in their relationships or younger, have more struggles with intimacy; thus, sexual relationships are strained. The coping strategies are still being ironed out, and they are more apt to seek attention from others to cope with feelings of (not always actual) rejection." If they are seeking therapy, she says, it's common that "one of the partners feels 'dragged'" there.

On the flip side, says Paiva, "My midlife couples have a comfort level, built oxytocin triggers easily with each other, and do not seek attention usually, thus they focus more on themselves." Both people can show up in a different way in this case, she says. "Both partners always seem equally engaged. There is just a different bond with my midlife couples." Sex keeps getting better with age and experience: Now that's something to which I'll raise a glass.

More like this
GIRLI & Q Fell In Love At A Skatepark & Never Looked Back
By Jessica Morgan
Are Gemini & Leo Compatible In A Relationship?
By Kristine Fellizar
35 Sexy Texts To Send Your Partner
By Griffin Wynne and Carolyn Steber
I Want More Sex But My Partner Has ED. What Do I Do?
By Sophia Benoit
Get Even More From Bustle — Sign Up For The Newsletter