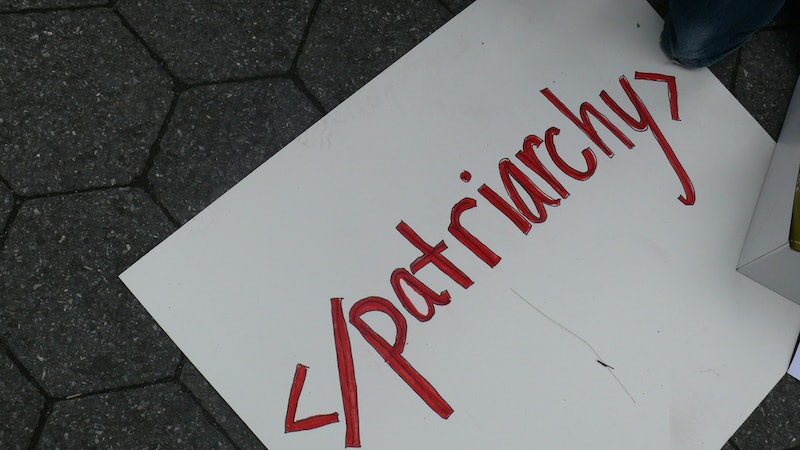 Even as a loud-and-proud supporter of equal rights (emphasis on the loud), I learned a long time ago that there's no way to be a perfect feminist all the time. In fact, I come across everyday things people don't realize are anti-feminist, well, every day. As much as we would love to do so, it's impossible to live up to ideal feminist standards for a number of reasons — not least of which is the fact that these standards differ depending on your definition of feminism. Sex-positive feminists, for instance, are supportive of women's choices to work in the sex industry, while sex-negative feminists criticize this view for encouraging what they see as a patriarchal cycle of abuse. Similarly, what an intersectional feminist sees as ideal behavior would differ greatly from someone who emphasizes separatism from the patriarchy.

Clearly, there's no single definition of feminism, and as a result, I've become wary of the phrase "anti-feminist." Who is to say what's feminist and what's not? In my experience, the best way to judge something is to ask yourself two questions: Does this negatively affect other women? Furthermore, does this negatively affect myself as a woman? If it does, chances are it's anti-feminist. That being said, there are some things we all do that we might not realize are anti-feminist until we stop to think about it. Let's take a look at five of them below:

We all went through a phase in middle school when we sought to distance ourselves from "other girls." Unlike these mythical girls, who do feminine things like wear makeup and enjoy romantic comedies, we were Cool Girls — you know, just one of the guys. Most of us grow out of the "other girls" syndrome, as I like to call it, but it's still easy to fall into the trap of distancing ourselves from our gender. Femininity is so looked down upon in society that we're encouraged to dissociate ourselves from other women, especially when you consider how women are consistently pitted against each other in ways that men never experience.

So how is this anti-feminist? The answer is twofold: First, feminism is about solidarity with other women. When you say you're not like other girls, you create a distance between you and your sisters, and it implies that other women are lesser beings. Secondly, it's a rejection of the female identity, one which quickly falls apart under scrutiny. The "other girls" in question are almost always assumed to exemplify femininity: She does her hair, she reads pulpy romance novels, she likes long walks on the beach, etc. The implication is that these are inferior interests, but when you think about it, they're only seen this way because society says so.

When it comes to expressing emotion, women face something of a catch-22: If we hold back, we're seen as stoic and unfeminine — and someone always ends up telling us to smile. On the other hand, if we show any emotion, we're seen as living up to feminine standards and outright dismissed. It's an impossible line to walk. In fact, why bother trying to walk it at all? I would argue that as feminists, it's more important to stay true to ourselves than to conform to patriarchal standards. If you're naturally reserved, don't bother trying to show more emotion so people will think you're ladylike, and the opposite is true as well: If you're exuberant by nature, there's no need to police yourself so you'll be taken seriously. If someone is worth your time, they'll take you seriously anyway.

Feminism has historically shut women of color out of the conversation, and it's only recently that intersectional feminism has begun to change this. As always, there are some who claim race has no place in the movement, but there's no denying that women of color have different experiences than white women and, therefore, different needs. To deny that these differences exist is counterproductive and, frankly, insulting.

4. Comparing Yourself To Other Women

We've already touched on putting down other women, but learning not to put yourself down is just as important. After all, patriarchal societies thrive on perceived competition between women; it's easier to keep women down when we're fighting each other for what little respect there is to be had. When you compare yourself to a female work friend, even though she works in another department and your male coworkers would be a better choice for competition, you're just perpetuating the idea that there can only be a certain number of successful women, and we have to fight each other to get to the top. It's a hard behavior to unlearn, but try to keep your internal radar as gender-neutral as possible.

This isn't to say that all competition is bad; we just need to remember that it is possible to be competitive and supportive at the same time.

5. Shutting Men Out Of The Movement

It's natural to be a little distrustful of men who want to support feminism — any time a member of a privileged group wants in on a movement for the oppressed, it's hard to know whether they're genuinely interested or just doing it for brownie points or a sick sense of curiosity. In fact, some believe that men actually can't be feminists because they don't experience the patriarchy in the same way.

However, contemporary feminism is more inclusive than its predecessors, and there has been an increased effort to include men in the movement. After all, men are deeply affected by the patriarchy as well, even if they stand to benefit from a male-dominated society in ways that women never will. Furthermore, you don't have to experience oppression to understand that it happens, and men can be valuable allies without taking away from women's experiences.

That being said, next time a Nice Guy pretends he's a feminist so he can score among the ladies, you have my full permission to give him your best bitch face.

More like this
25 Inspiring Quotes From Black Women To Celebrate Black History Month
By Kyli Rodriguez-Cayro and JR Thorpe
24 History-Making Black Women You Probably Didn't Learn About In School
By Ayana Lage and JR Thorpe
Twitter Is Identifying With Sally Field & Jane Fonda’s Friendship In New Viral Video
By Jake Viswanath
What The UK Blocking Scotland’s Gender Recognition Bill Means
By Sam Ramsden
Get Even More From Bustle — Sign Up For The Newsletter
From hair trends to relationship advice, our daily newsletter has everything you need to sound like a person who’s on TikTok, even if you aren’t.