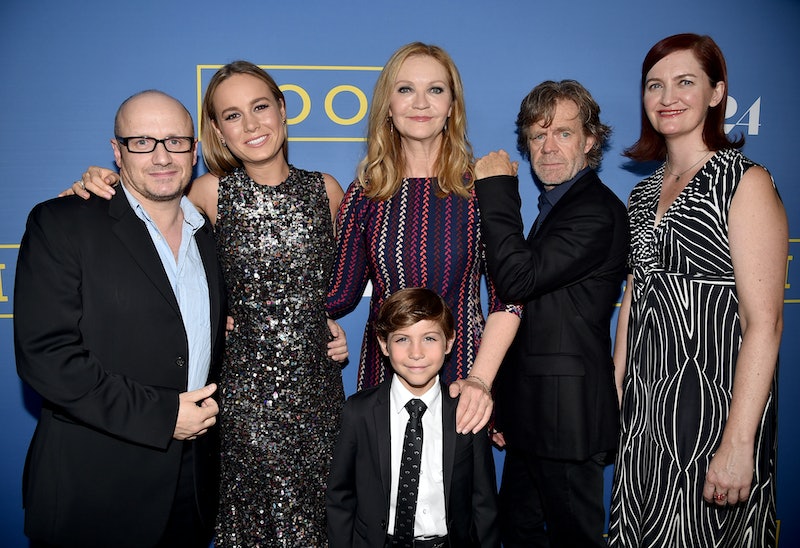 On Thursday morning when the 2016 Golden Globes nominations were announced, there were quite a few surprises. Unfortunately, there was no love for Broad City, Jessica Jones, or Unbreakable Kimmy Schmidt. A pleasant surprise? Lady Gaga picked up a nomination for her role in American Horror Story. Meanwhile, other nominees were less of a shock, including three nominations for Room. Brie Larson is nominated for Best Actress in a Drama and Emma Donoghue is up for Best Screenplay. The movie — which is also in the Best Picture, Drama category — is based on Donoghue's best-selling novel. Anyone who's seen the film can probably attest to how powerful it is, and it's definitely deserving of Golden Globes recognition. However, Room's Best Screenplay nomination matters more than you may think, because the Golden Globes didn't nominate many women behind-the-scenes. In fact, Donoghue is the only woman nominated in this category — and the only woman acknowledged for her work behind-the-scenes in films.

This year's Best Director category features no women. Why, out of five nominees, are no female directors given any acknowledgment? And while Donoghue's Best Screenplay nom is awesome, why are only 20 percent of the nominees in this category female? I don't know the answer to these questions, but must say these statistics are incredibly disappointing. The representation of female filmmakers is severely lacking. Although overall this year's Golden Globes nominees feature quite a bit of diversity (especially when it comes to films and TV shows about the LGBT community), there is still work to be done.

When considering 2016's Best Picture nominees in Comedy and Drama, only three of the 10 movies nominated have screenplays written by women: Amy Schumer's Trainwreck, Emma Donoghue's Room, and Phyllis Nagy's Carol. Considering Carol leads the pack with five Golden Globes noms, why wasn't Nagy up for Best Screenplay? It seems more than warranted. Plus, what about Trainwreck? After all, Schumer is nominated for Best Actress in a Motion Picture, Musical or Comedy. She totally deserves some acknowledgement for writing the brilliant and hilarious flick.

It's also worth noting that although David O. Russell received the screenwriting credit for Joy (which is up for Best Picture, Drama), Annie Mumolo worked on it as well. Mumolo, who also wrote Bridesmaids, didn't get the screenwriting credit she deserved and it caused a bit of an uproar. Although Mumolo eventually received a story credit for Joy, it's not quite the same. This actually may be indicative of the larger issue here — why aren't women getting the acknowledgment they deserve for working behind-the-scenes on movies?

The lack of nominated female screenwriters isn't just an issue when it comes to the Golden Globes. It's relevant at the Oscars as well. According to a statistic compiled by Vocativ, in the past 10 years, only two female screenwriters received Oscars. In April, the website examined all of the 100 screenplay nominations from 2005-2014. There were 160 screenwriters credited for these films. And, guess what? Only 18 of those 160 screenwriters were female. That winds up being only 11.25% — an incredibly sad stat.

While this is a disappointing realization, here's hoping that things get better from here! Female screenwriters certainly have stories worth sharing. And, although Room's Best Screenplay nomination is a great place to start, the Golden Globes can definitely do more to acknowledge the talented women behind-the-scenes.

More like this
Sandra Bullock, Girlboss Extraordinaire
By Matt Harkins & Viviana Olen
'Stranger Things' Star Joe Keery Is Dating An "Indie Scream Queen"
By S. Atkinson and Grace Wehniainen
Everything To Know About Marvel’s 'Thor: Love And Thunder'
By Grace Wehniainen
Sadly, 'Fantastic Beasts: The Secrets Of Dumbledore' Isn’t Streaming — Yet
By Arya Roshanian
Get Even More From Bustle — Sign Up For The Newsletter