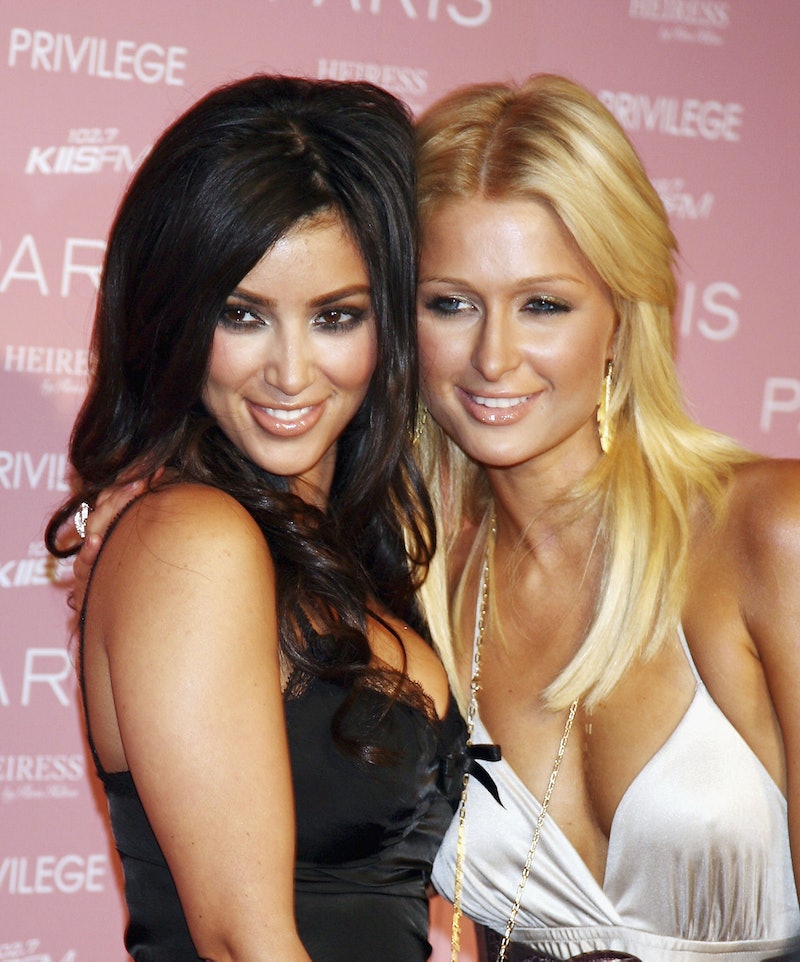 While some people obsess over sci-fi shows or crime dramas, I can't help but love reality TV. In fact, I'm the proud owner of all five seasons of The Simple Life on DVD. Paris Hilton and Nicole Richie's hilarious adventures never get old! Although it's been eight years since the last season aired, I think the world desperately needs another season. While Nicole has since moved on to her own show Candidly Nicole , Paris should do a new season with a different partner-in-crime. Why not have her team up with today's queen of reality TV — Kim Kardashian? Considering Paris and Kim have been friends since childhood, it's not a farfetched idea at all.

Since Kim has starred in countless seasons of Keeping Up With The Kardashians and its subsequent spin-offs, I bet she'd be up for a new adventure. Because let's be real, when would she ever say no to more screen-time? Kim would probably love to hop on a bus with Paris and take a trip cross-country. It'd be a perfect way to break up her crazy-busy schedule. Plus, it could be a nice break from her mommy duties, now that Saint West has arrived.

Here's a list of reasons that Paris and Kim should recreate The Simple Life. It may sound like a crazy idea, but it's just crazy enough to work!

1. Their Personalities Balance Out

Paris is way more outgoing than Kim. The KUWTK star isn't much of a partier, meanwhile Paris loves to go out. They would keep each other grounded — and maybe bring out other sides of each other.

2. It'd Be A Perfect Way To Bury The Hatchet

OK, so who knows if there's actually a rivalry here, but remember the Kim Kardashian: Hollywood game? People assumed that Willow Pape, Kim's arch-nemesis, was based on Paris. This would be a good way to rebuild their friendship.

3. Paris Is Always Looking For A New BFF

Back in 2008, Paris had an entire show called Paris Hilton's My New BFF. Not sure if she kept in touch with the contestants, but I think Kim would make a great pal.

4. They've Traveled Together Before

Paris wished Kim a happy birthday this year and pointed out how much fun they had in Australia. Why don't they redo that vacay for The Simple Life: Down Under?

5. They're The Ultimate Selfie Queens

As part of the show, they'd have to give up their cellphones. I bet it'd be a struggle for them to go on a trip — without documenting it via selfie. I'm sure they could do it, but it'd be pretty tough!

6. Kim Could Really Use A Break

Personally, I'm exhausted just thinking about how busy Kim was in 2015. Not to mention all the stress of her pregnancy. She definitely deserves a road trip.

7. Kanye Is Way Too Distracted

No offense to Mr. West, but based on the tweet above, he probably isn't much fun to be around right now. It's a perfect chance for Kim to go off and enjoy time by herself.

8. It's Been Far Too Long Since Paris Was On TV

Paris is hilarious and today's TV shows just aren't the same without her.

9. They'd Eat All The Snacks

One of my favorite parts of The Simple Life is all the food that Paris and Nicole would sneak at their jobs. Considering Kim once hopped on a plane and went to Paris just to eat cheesecake, I bet she'd be down for all the snacking.

10. Kim Wouldn't Be Bossed Around Anymore

Kim used to work as Paris's assistant. And OK, maybe she bossed her around a little bit. But that was years ago and Kim is way more assertive now. Did you see how flawlessly she shut down a fat shamer? She knows how to stand up for herself.

From filming Carl's Jr. commercials to modeling on magazine covers to starring on reality TV, these two have had pretty similar career paths. Plus, they both had a stint of making music — although Paris was way more successful in that department. (Sorry, Kim!)

Sure, "loves it" applies to practically any situation, but this show could give us an entirely new catchphrase to use in everyday conversation. Let's think beyond "that's hot."

13. It Would Be A Full-Circle Moment

Since these two grew up together, it really would be full-circle for them to do a project as adults. Especially since, in some ways, Paris helped introduce the world to Kim.

14. They Would Prove People Wrong

One of my biggest pet peeves is when people say that Kim is "famous for no reason." Same goes for Paris. At this point, they've established themselves as successful in a variety of business ventures — perfume, iPhone apps, clothes, etc. This show would be a great opportunity to remind everyone how awesome they actually are.

Consider this my official vote for a Paris and Kim season of The Simple Life in 2016. Now who can I talk to to make this happen?