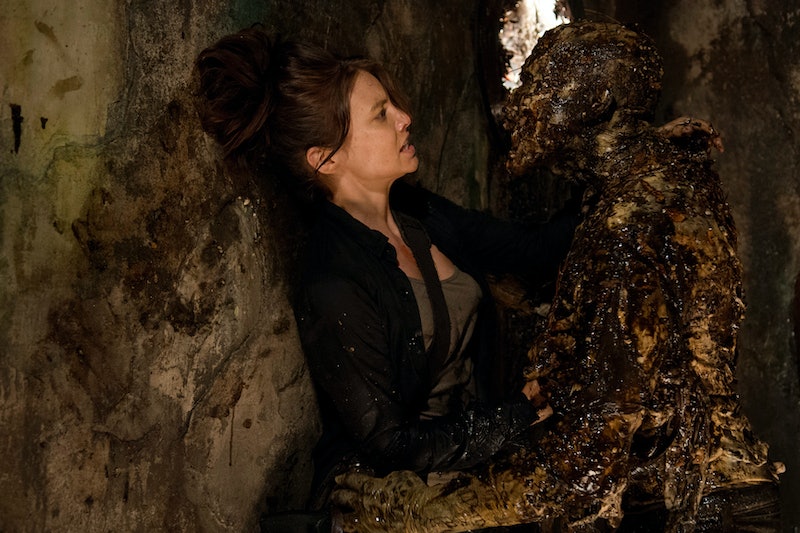 Who says Christmas can't be scary? The most wonderful time of the year is actually kind of creepy when you think about it: a strange man sneaks into your house through your chimney in the middle of the night, leaving mysterious packages made by a legion of mischievous minions. That darker side of the holiday is what engenders such eerie entertainment as Gremlins, The Nightmare Before Christmas, and — most recently — Krampus. In the subversive spirit of those creepy classics, let's take a moment to look back at the scariest moments on TV in 2015.

The list below is naturally full of some of the usual suspects: literal horror shows like American Horror Story and The Walking Dead. But there are a few surprise entries here as well, from family-friendly musicals like The Wiz Live! to laugh-out-loud sitcoms like You're The Worst. Sometimes it's the shows that you don't expect to scare you that end up scaring you the most. Who knew Dorothy's trip over the rainbow would conjure nightmares? Who could have predicted that Jimmy and Gretchen's dysfunctional relationship would yield one of the most horrifying scenes this season?

Turn off the lights, hide under the covers, and get ready to recap the 13 small screen moments scared the crap out of us the most this year:

The Wicked Witch of the West's flying monkeys already haunted our dreams after we watched the 1939 original as children. You know what upgrade the Winged Warriors really didn't need for NBC's live musical production of The Wiz? GLOWING RED EYES. Who thought that was a good idea? There are children watching, NBC! (And some grown adults as well, who will also be having some sleepless nights for a while.)

There was a lot to be afraid of in this action-packed episode, from the hordes of reanimated wights pouring relentlessly over the cliffs to the zombie children mercilessly ravaging the wildling army to Jon Snow's intense mano-a-mano with one of the implacable White Walkers. But the sight of the Night's King standing on the shore, raising his arms as all the slaughtered wildlings rose to their feet behind him, was guaranteed to send a chill down anyone's spine.

There are many adjectives you could use to describe this Shonda Rhimes-produced legal soap. Sexy, sure. Intense, absolutely. But scary is not really one of them. Except for when the episode ends with adorable, innocent Oliver being surprised in his home by a presumed homicidal maniac. Of course, we know now that Oliver survived the encounter (spoiler alert), but for a whole week that cliffhanger left viewers scared for the fate of one of the most lovable characters on TV.

Sure, the characters were never in mortal danger during this scene. But that didn't make it any less frightening. Jimmy and Gretchen's foray into a haunted house was pretty much every scaredy cat's worst nightmare of what a haunted house can be. Filled with gruesome masks, tarantulas, and blood being thrown onto screaming participants, this three-minute-long sequence hit pretty much every phobia possible in quick succession. You're the worst, FX.

In one bone-chilling monologue, Lily — aka the reanimated Brona Croft — transformed before our very eyes from a wilting flower into a wrathful creature of vengeance. In just three short minutes, the naïve and innocent young woman we thought we know this whole time is revealed to be nothing more than a facade masking the damaged soul inside. The revelation is terrifying and thrilling in equal measure. The monologue is veritably Shakespearean in scope and ends with Lily's vow that she will be the scourge of all mankind. It's impossible not to quail in the face of her towering fury.

The latest addition to the Marvel Cinematic Universe is by far the most unsettling, with Jessica's lingering PTSD and David Tennant's performance as the abusive villain Kilgrave. But it was the very first episode of this Netflix series that set the tone for what was to come: just as Jessica has saved Hope from Kilgrave's clutches and reunited the young woman with her frantic parents... Hope pulls out a gun and shoots them both dead while our heroine can only watch in horror, just to make it clear that there will be no clean-cut happy endings in this story.

Freak Show got off to a horrifying start in 2014 with the tale of Twisty the clown... but as soon as that masked murderer was killed in the fourth episode, it was diminishing returns on scares from there on out. But as the season drew to a close, pretty much every character was offed in some horrifyingly brutal fashion — none more brutal than poor Maggie Esmeralda, who was literally sawed in half by Neil Patrick Harris's demented ventriloquist, Chester. Alakazam!

Season 2 of Fargo was full of violence and blood and death — but when I think back to the season's most nail-bitingly tense sequence, it's the standoff between Bear Gerhardt and Karl Weathers at the prison. Nick Offerman's Karl was a colorful character, but he wasn't part of the main cast, so it was easy to envision him meeting a sticky end. But the fact that the explosion of violence viewers had been conditioned to expect didn't happen somehow made it all worse. We kept waiting for a visceral release that never came. No relief from the tension was provided: just words, stares, and our own racing heartbeats.

The show had been building to this moment for three years; but that didn't make it any easier to watch poor, mentally disturbed Norman Bates completely discard his identity and adopt his mother's persona while sleepwalking... or, should I say, sleep-making-breakfast. Freddie Highmore's performance was pitch-perfect: everything from the apron to the way he walked to the nonchalant way he told Dylan that "Norman is sleeping" was chilling. In lesser hands, the scene could have come across as comical. But Highmore nailed it — and terrified us all in the process.

3. The Grenade, The Leftovers ("Ten Thirteen")

After spending the entirety of Season 1 evolving from a novice cult member to one of its fiercest members, Meg terrified viewers in her first Season 2 appearance, when she raped Tom Garvey and then threatened to light him on fire. But that was a walk in the park compared to what the Guilty Remnant leader did in the season's penultimate episode, walking onto a school bus packed with children, pulling the pin on a grenade, rolling it down the aisle, locking the door, and walking away as the children screamed in abject terror. The eventual revelation that the grenade was a dud did little to quell the horror we'd already experienced.

This particularly icky scene from The Walking Dead's sixth season was pretty much a perfect storm of NOPE, combining zombies, enclosed, spaces, and human waste into one grotesque, claustrophobic, gooey mess. It must be hard for the writers to keep coming up with new ways to scare us with the same mindless monster after six years on the air... but in this case, they succeeded with aplomb.

This is the stuff nightmares are made of. Hannibal always toed the line between reality and dreamscape, with one often being indistinguishable form the other. So when Will Graham watched as a corpse — flayed and folded into the shape of a heart — began to unravel, it wasn't immediately clear whether he was imagining things. (Remember, this is a show where a live bird came out of a dead human's chest that came out of a dead horse's womb.) When the flayed corpse grew antlers and hooves and started... not walking exactly, but stalking... in his direction, the knowledge that this was a hallucination didn't make the horrific sight any easier to swallow.

Merry Christmas to all, and to all a good night! Who needs visions of sugarplums when you can have night terrors full of winged warriors and addiction demons sewer zombies and stagmen? You're welcome, everyone.