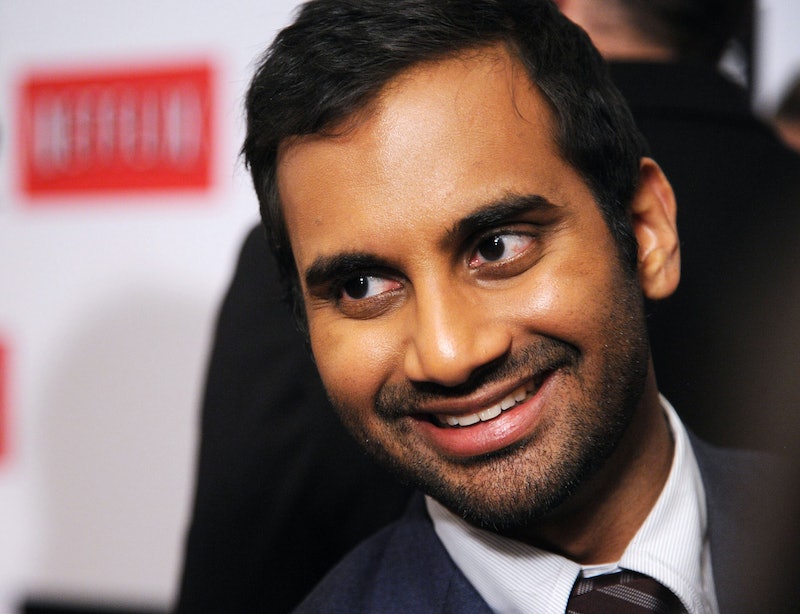 Sometimes celebrity books have really dumb names, but Aziz Ansari's Modern Romance has the perfect title for his meditations on love. He continued with his research of what love really means in the Digital Age in his Golden Globe-nominated Netflix series Master Of None , which shows his character Dev's trials and many, many tribulations dating in New York as a young Indian-American man. One of Ansari's favorite topics to revisit in his standup, his book, and on Master Of None is the idea of what marriage means to him, often discussing his parents' arranged marriage as a framework. But for as much as he talks about matrimony, what does he think of marriage in his own life? Is Ansari going to marry his girlfriend Courtney McBroom? He still can't say either way, but that doesn't mean he's not totally in love.

The 32-year-old comedian and his chef girlfriend have gotten quite serious quite fast, much to fans' delight. Ansari met McBroom, who used to work at the famous Momofuku Milk Bar and now does pop-up restaurants in Los Angeles, through friends, and the two started dating in August 2013. They were actually quite private about their relationship until a year later, when headlines popped up that she had "pretty much moved into his place" in LA.

Ansari has shared so many of his thoughts on love and his ambivalence and anxiety about finding "the one" that it almost feels like a personal win to see him happy. (Or maybe I'm just emotional about him; he feels like the brother I never had).

He opened up in an interview with Elle in October about his marriage prospects. He was on vacation with McBroom in Italy (in the car on their way to Tuscany, land of pastas) while he was doing the interview over the phone. When asked if there was a wedding in his future, he said,

I don't know. There are more and more people who don't really feel so enraptured by the institution of marriage these days. There are so many more people who are like, "Oh yeah, we just went to the courthouse and got this thing done so we get a tax refund."

He was pushed, of course, and asked if he was going to propose in Italy: "I was, but then I had to do this interview." LOL.

But Ansari has come along way since his famous "Marriage Is An Insane Proposal" bit from his 2013 stand-up special Buried Alive, talking about just how terrifying the idea of commitment eternal is, and his surprise that people he knew would get married a year, year-and-a-half after they met: "I've had sweaters longer than that!" Above all, Ansari's approach to marriage is careful, thoughtful, and measured, like his comedy and his writing. He describes his relationship with McBroom as transitioning from eating Skittles to realizing you need a nice, nutritious salad.

And even though the couple is relatively low-key and private, Ansari is always willing to express appreciation and genuine love for his lady, talking not only about the kinds of dates they have (he took her to a WWE SuperSlam), but also how they are learning from each other and helping each other grow. In an interview on The Late Show With David Letterman he said that McBroom is a big feminist, which made him "think about those kinds of issues." Which absolutely came through on Master Of None with surprising understanding and a sense of reality.

So, whether Ansari gets married sooner, or later, or perhaps never, it's clear that his approach to love is extremely serious and considered. When asked how he knew that McBroom was worth it, he didn't have a syrupy answer, but said that rather, their relationship intensified and grew over time: "I didn't want to stop hanging out with her. We just kept hanging out," he told USA Today. It's a casual answer but it says a lot; wanting to spend more and more time with someone is really the simplest but one of the best litmus tests to know if a relationship is worth the effort.

And he loves her so dang much, as evidenced more than anywhere else in his dedication of his Madison Square Garden special to her:

That all being said, Ansari would have the greatest wedding of all time. After all, Tom Haverford knows how to throw a party, and so does Aziz — but probably a bit less ridiculously than Tom. I imagine there would be fresh pasta and amazing pastry from chef McBroom, Aziz in the greatest tux you can ever imagine, and a performance by, who else, Ginuwine.