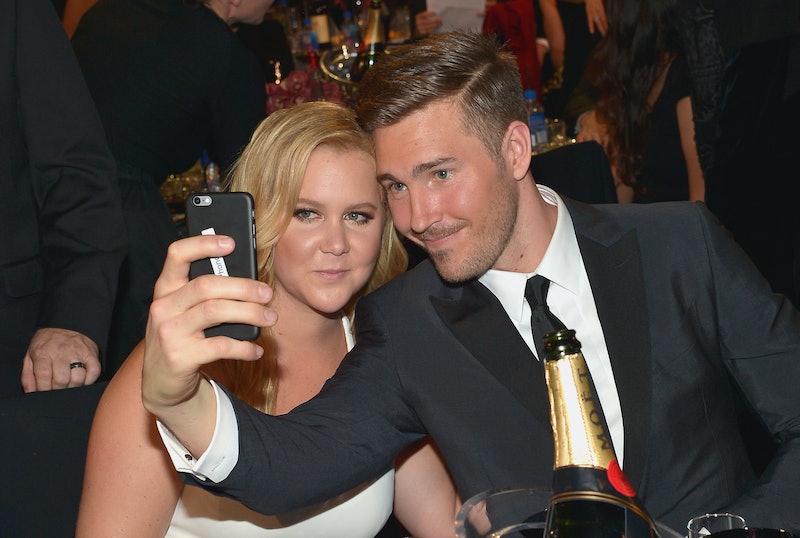 Picture this: You're a successful human and have made it as an actor, a musician, a reality TV star — whatever. Clearly you have the chops, the personality, and the talent to make it in the entertainment biz. And then you start dating. And your boyfriend or girlfriend, husband or wife, just happens to be more attractive than anything ever. Is life ever fair for us normies? Maybe not (heavy sigh), but for these 13 celebs with hot significant others, it certainly seems like things are pretty darn grand.

Clearly, my remarks are meant to be tongue-in-cheek and looks aren't everything and Other Important Lessons We Learned in Elementary School. But with the prevalence of Instagram and everything celeb-centric so heavily engrained in our culture (or at least in the daily routine of Twitter, then Insta, then Snapchat, etc.), sometimes it's fun to admire our favorite celeb couples — especially the ones that consist of one Famous Person and one Normal. Especially when that normal one is hot AF.

Check out 13 celebs whose partners are, to borrow a phrase from the ever-wise Zoolander, "really, really, ridiculously good-looking." And let us all share in that thirst together.

Amy Schumer's boyfriend Ben Hanisch is not only hot — he's super supportive of his girlfriend. Just look at that caption! Obsessed.

Julianna Margulies and hubby Keith Lieberthal have been married for eight years — and her husband's good looks are still frequently called out in headlines about the couple.

Allison Janney is one badass actor (I've loved her ever since she was the erotic-novel writing guidance counselor in 10 Things I Hate About You), and that fine piece of arm candy known as producer Philip Joncas only adds to her greatness.

Natalie Portman met her future husband on the set of Black Swan, which he choreographed and also had a role in. So not only is Millepied attractive, he's also a successful dancer and choreographer.

Let's make one thing perfectly clear: Amal Clooney, like every other hot significant other on this list, obviously has many other things going for her other than just being a good-looking partner to a celebrity (namely, the fact that she is an international relations barrister) — but she certainly compliments her husband in the looks department.

Jennifer Meyer is a jewelry designer to the stars, and gorgeous bride to Tobey Maguire.

I love Haylie Duff and Matt Rosenberg together — the two are the most adorable parents to daughter Ryan — and I'm kind of obsessed with the fact that Rosenberg seems like the most chill dad on the planet. He's rockin' the whole "yeah, I'm casually hot" vibe, complete with sweatpants and everything. Love.

After too many years of dealing with the trash heap of a human that is baby daddy Adam Lind, Chelsea Houska upgraded immensely. Not only is her fiancé Cole DeBoer great with Houska's daughter Aubree and a soft-spoken and genuinely kind person in general, he's also hot. There's a reason that Houska's Instagram is constantly filled with heart-eye emojis.

The 5SOS drummer and blonde model may have an on-and-off relationship, but Bryana Holly is always (always) on — on-point that is. Girlfriend is absolutely flawless.

Sometimes I feel like the whole world is collectively thirsty for Lucy Hale's boyfriend Anthony Kalabretta. Dude is a hunk.

As Audrina Patridge and longtime boyfriend (now fiancé!) Corey Bohan gear up to become parents for the first time, they're only becoming more and more attractive (if that's even possible). While Patridge has been a stunner since her Hills days, her BMX biker BF is just getting hotter and hotter as he preps to be a dad.

Ryan Sheckler is like the pro-skateboarder version of Justin Bieber before Bieber was a thing. And, like Bieber, his stunning blonde girlfriend, Mia Bonde, is a frequent fixture on his Instagram — never shying away from proclaiming his love for her. Awww.

Remember, it's OK to feel a little green with envy — it's only human nature, after all — but instead, let's celebrate all of the collective attractiveness right here, for it is a gift bestowed on us all.