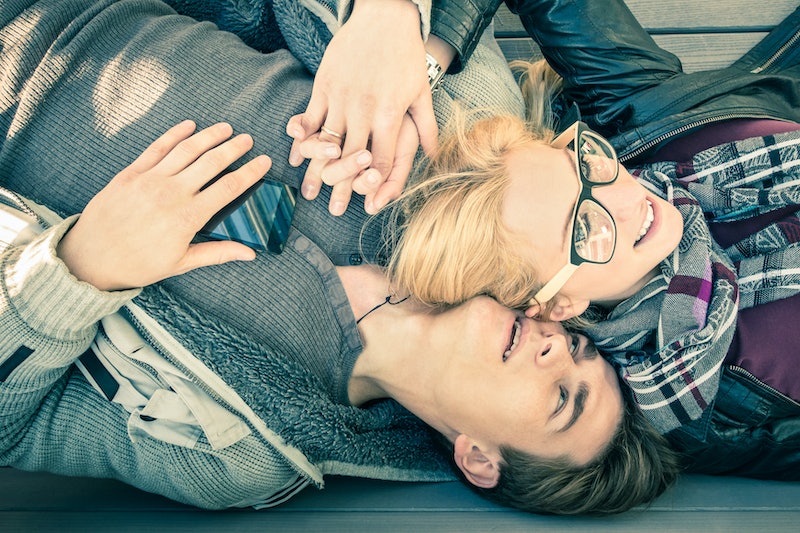 Thanks largely to gender inequality, we've been programmed to believe that women are the only ones who need to be pampered by their partners. Valentine's Day tends to feel like an extension of that twisted double standard. Anyone who loves men, though, knows that many of them like romantic gestures just as much as many women do — and science may back that up. Recent research released by the journal Proceedings of the National Academy of Science claims that male and female brains aren't inherently wired differently. So it stands to reason that women aren't necessarily the more romantic gender. But since men aren't really encouraged to admit that they like romance, and women aren't told to be chivalrous, sometimes it's hard to know just how to romance your man (or any guy, for that matter).

Instead of buying into the myth that women are the only ones who should be showered with affection on Valentine's Day, why not give your guy a little taste of romance? His version of that might look a little different than yours — but then again, you might be surprised by how similar his idea of romance is to your own. No matter what you do to show your love, though, your dude will probably be psyched that you've gone to the trouble of romancing him in the first place.

Here are 12 ways to romance your dude.

1. Put A Note In His Bag Or Coat Pocket

This is a perfect way to show affection to a dude who is a bit too shy to receive grand gestures in public. Men want to know they're appreciated, even if it's in the smallest ways. Plus, this romantic act has the element of surprise on its side. The last thing he'll expect when he takes his laptop out of its case is a card listing all the reasons you like having him around.

2. Cook Him Some Comfort Food

If you and your guy both have busy schedules, it's unlikely that the two of you have gotten to enjoy a home-cooked dinner together recently. Now's your chance to remedy that, and to romance him in the process. Browse through recipes of his favorite foods and desserts until you find one you want to make. If you feel up to it, time the meal to be ready when he walks in from work for maximum romance points.

3. Take Him On A Weekend Getaway Trip

He's had enough of this town (and so have you, come to think of it), so look around for some sweet deals on flights and hotels. If you and your budget don't feel up to flying, find a nearby place where you can rent a cabin for the weekend. A trip for just the two of you will make him feel special, and he'll probably love that he didn't have to plan any of it.

4. Buy Him Tickets To A Game Or A Concert

If your dude digs hockey or alt-J, buy him tickets. If you dig that stuff too, then go with him. If you think sports are the most boring thing ever and alt-J just isn't your jam, get him a few tickets so he can go with his buddies. When in doubt, consult with his best friends.

5. Pay Him A Surprise Visit At Work

In my experience, men love this — and honestly, you can't blame them for wanting to show you off. Pay your dude a sweet visit at the office during lunch, then whisk him away for a nice outing. He'll return to his desk energized and grinning.

Adventures are almost always sexy, even if they go horribly wrong. Think of the things he's always wanted to do, whether it's as big as skydiving or as simple as taking hip-hop dance classes. Going out on a limb for him will make him feel super pampered, and it will give you two a chance to spend some quality time together. If it fails miserably, at least you'll have something interesting to chat about at your next dinner party.

7. Wear His Favorite Outfit Just To Hang Out

It might be a white tank top and jeans, his boxer shorts, or that outfit it's way too cold to wear outside. Whatever it is, dress yourself in it and spontaneously show up to his front door. First, watch his jaw drop. Then, take him inside for some fun. Which leads us to ...

8. Try Out A New Sex Position

Is there a position you've been eyeing online but have been too nervous to try? Tell your dude you want to try it out. You don't even have to do it the "right way" for it to be totally sexy and romantic for him. You getting naked is sexy enough, really, so even if the new position is a dud, I doubt he is going to mind.

9. Plan A "Netflix And Chill" Night

The simplest of gifts are often the best. If you know your guy has been super stressed lately, carve out a whole day and/or night for the two of you to chill guilt-free. Arm yourselves with a Netflix to-do list and handfuls of candy, and then let the rest of the world fall away as you cuddle up for a horror flick.

10. Call All The Shots For One Day

Let him sit back and relax while you take the wheel for a while. Chances are he'll enjoy the excuse to let go while you take charge. Since society has been drilling the silly "alpha male" ideal into his head from boyhood, your dude will probably be stoked to have a complete break from all that nonsense. Who knows — you might even learn something about your relationship dynamics in the process.

11. Surprise Him With Flowers

If you want to catch your guy completely off-guard and watch him blush, spontaneously bring him flowers one day. It's one of those romantic gestures that guys don't usually get to experience — and there's no good reason for that. You'll feel super chivalrous. (Plus, you'll get to enjoy the flowers too.)

If your dude values his alone time, nurture that by setting up a day when you fill the house with all of his favorite things, and then leave him alone for a while. This may not sound like the most conventionally sexy thing, but it could be exactly what he needs. Romance doesn't have to be textbook.