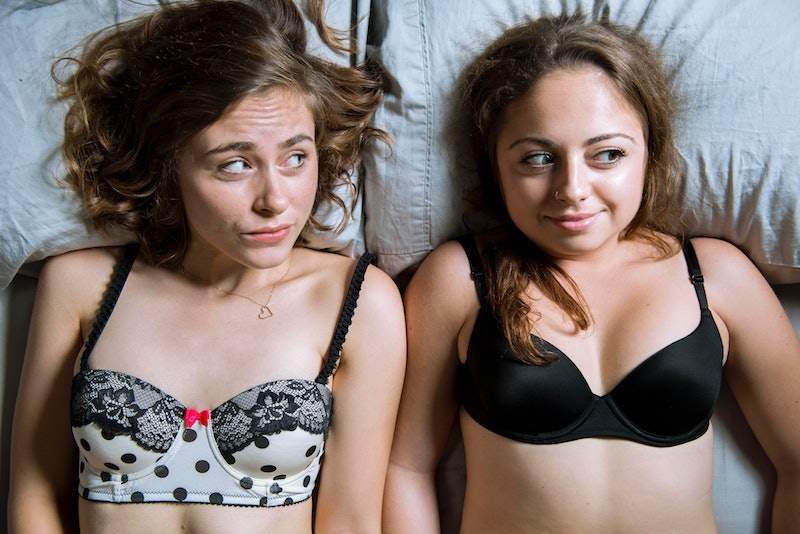 A recently released PETA ad is claiming that vegans are better in the sack, making the meat eaters of the world collectively roll their eyes harder than they ever have before. It's not the first time the organization has pulled the "vegetarians have better sex" rabbit out of their faux leather hat, though, which makes the following question even more pressing: Do vegans really have better sex than meat eaters? Is there any research that backs up the claim? Let's take a look at what science has to say about it, because if you're going to go around telling a whole bunch of people that they're bad at sex because of their dietary choices... well, let's just say that you'd better not just be pointing the finger for the hell of it.

Before we go any further, I feel it absolutely vital to explain where I'm coming from in writing this. I had my own adventures with veganism not too long ago; it wasn't quite for me, so instead, I spent four years as a vegetarian, happily meat-free. I now eat a little meat because it makes me physically feel better, but mentally and emotionally, I hate it. (But that's just me; if you eat meat and love it, more power to you.)

Even when I was a strict herbivore, though, I was never a fan of PETA due to the approach they take in combatting abuse toward animals. So, my point is this: Right now, you're talking to someone who has spent a substantial amount of time on both ends of the spectrum, from vegan to cow killer. I think it's a personal choice that we all need to make, without judgment from others. Now, let's move forward.

According to PETA's video, meat eaters have zero skills in the bedroom; it's a similar argument they made in a video released in 2009, too (NSFW!) The new commercial features a vegan sex god giving his woman hours of toe-curling orgasms, while, the sad meat eater can't even maintain an erection and ends up as the target for a dislodged air conditioning unit. All because he ate bacon.

So: While there are many wonderful, beautiful things about being a vegetarian or vegan, has science proven that being a grand slam in the bedroom is one of them? Here are some stats.

First, it's worth noting that zinc deficiency is common amongst vegetarians, which has been connected to decreased testosterone levels and diminished sex drive (something which Slate pointed out when that 2009 video hit the scene). Vegetarian women are also more likely than their meat-eating counterparts to experience loss of periods, which has been correlated with vaginal dryness and low libido. Funny — I don't remember PETA mentioning anything about dry vaginas.

However, to be fair, I must also point out that in research conducted by OK Cupid where they surveyed 256,370 users, vegetarians were noticeably more into giving oral sex than non-vegetarians. They might have dry vaginas, but they still like to peel the banana.

What about the precise choice of foods one consumes? Is there any evidence that exactly what you eat affects your performance in the bedroom? Maybe, but it's not as simple as "veggies good, meat bad." While the lists of the best foods for boom-boom certainly include tons of fruits and veggies, they also include salmon (because the omega-3 fatty acids trigger arousal) and chicken breast (whose B vitamins can help a man's soldier stand at attention longer). On the flip side, science is suggesting that the high cholesterol and saturated fat content of steak can negatively affect blood circulation and sexual functioning.

OK, so meat can go either way, depending on what it is. What about dairy? If you're buying milk and cheese from the local grocery store, chances are that it's not coming straight from the udder. The synthetic hormones present in some of these products can mess with your natural hormone production big time. Why? Because the cows aren't usually grass-fed, and the milk has to travel to get to you. But! Calcium has also been found to improve sexual health. Is milk, in its most natural, beautiful form, bad for you? Nope. The bad news, though, is that raw milk is illegal in many states, and the interstate selling of raw milk is illegal at the federal level.

The is just the tip of the iceberg, but as someone who has spent years researching the topic, I can say this with confidence: There is no definitive answer. You can find solid, well-backed research in defense of both sides, so it isn't really fair of PETA to be telling us all that taking up a particular lifestyle choice is automatically going to make us beasts in the sack — or telling us that we'll suck at it if we don't make that choice.

So if you are trying to be a total magician in the bedroom, how should you handle your diet? The solution is the rule of thumb that you've heard a million times before and are probably sick of by now: Everything in moderation. Do you want a big, juicy, tender, mouthwatering steak? Go for it; just don't eat one every day. Do you need a glass of milk to dunk your Oreos in? Best. Snack. Ever. Just don't drink milk with every meal. How about Meatless Monday, where you eat vegetarian for 24 whole hours? That's cool, too.

Let's stop acting like this situation is 100 percent black and white. It isn't, and it never will be. Now, go have lots of good sex.