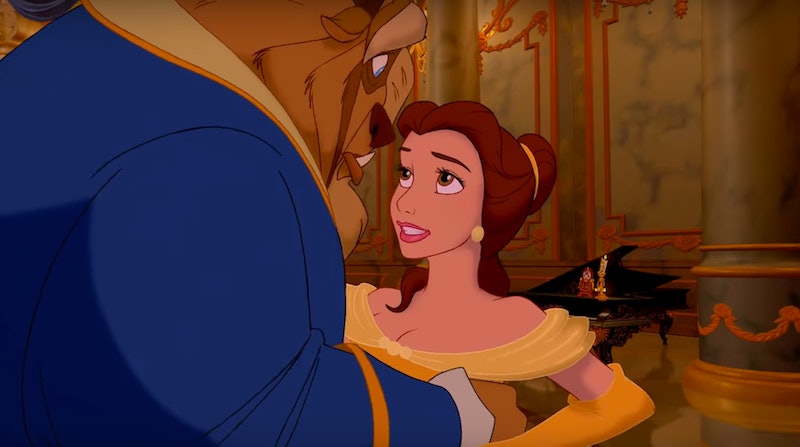 Disney movies were a staple in so many of our childhoods, and yet there's no denying that they can be problematic for a lot of reasons. I would argue, though, that despite some of their shortcomings, there were still plenty of times Disney broke gender stereotypes. Sure, there are a number of cases where female characters are oppressed or underrepresented. Disney has also been a bit problematic in teaching boys about masculinity, and new research has even found that overall, male characters have substantially more dialogue than female characters. But many of the female characters featured in the movies were incredibly strong, as well as opposed to the traditional role they were expected to fill. And that? That's worth acknowledging.

For all the movies' flaws, we can't ignore some of the brave and daring female characters Disney has created, and the courageous acts they have performed. I can think of more than one flick where it's the lady who saves the day, or where it's the lady who says no and puts her foot down, demanding more in life because she wants to be happy. Take a look at these ladies and their acts of bravery, as well as the men who were maybe not so "manly." They might be a little more groundbreaking than you think.

1. Beast Is All Vulnerable And Exposed

Beauty and the Beast seriously breaks away from the stereotype of the damsel in distress. In this Disney flick, it's ultimately the Beast who's in distress. He's really a prince who was turned into a monster as a punishment for his arrogance. If he wants to become human again, he must win Belle over, or he's doomed to live as a beast forever. For a change, it's the man who's desperate for the woman's attention, not the other way around.

He needs her. He must learn to shed his rough and hardened exterior if he ever wants to get his life back. Some Disney films frame the female as weak, fragile, and unknowing. In this case, Belle's totally got her sh*t together. Remember when Beast asks Belle to have dinner with him and she turns him down? He goes to his room to sulk — not exactly the lesson of stoic masculinity we're usually taught. And then there's the scene where he fights off those nasty wolves and ends up with a few boo-boos. Belle handles the medical emergency without batting an eye, and he's a bit of a weenie about it.

Finally, let's not forget how she repeatedly turns down Gaston's advances and would rather spend her time reading. Sounds like my kind of lady. (P.S. Gaston is a total buffoon.)

Forget a woman changing who she is to try to get the attention of a man. (Ahem, Cinderella.) In Aladdin, the title character asks his new genie friend to make him a prince, all so that he can get closer to Jasmine, who would never be allowed to hang out with a "street rat" like him.

So he becomes Prince Ali Ababwa. In the end, he goes back to being himself; and guess what? Jasmine still wants him anyway. She also stands up for him like a champ when they're chilling at his place with Abu and the Royal Guards try to take him away. She reveals who she is and demands his freedom. Jasmine is no wallflower. She knows what she wants, and she goes after it.

3. Mulan Passes As A Man And Saves A Whole Palace

When Fa Mulan learns that her elderly pops is being called back to war, she cuts her hair, takes his gear, and goes in his place, without telling anyone of her plans ahead of time. She has a rough start, but soon proves to be a strong and capable warrior. When their troops are ambushed in the mountains by the Huns, it's Mulan's idea to use a cannon not to take out their men, but to create a ginormous avalanche that buries all of them. Unfortunately, it's this same avalanche that almost kills the hunky Shang. Mulan to the rescue! She sweeps him up out of the snow and safely onto her horse.

Later in the story, back at the Imperial City, Mulan engages in solo combat with the evil leader after luring him onto the roof of the palace. With her creative and brilliant plan, they're able to save the palace and emperor, and defeat the Huns. The people of China bow down to her in honor, and she's gifted with the Emperor's crest and Shan Yu's sword.

Not bad for a Disney movie, eh? Mulan is rebellious and brave, putting the safety and happiness of others before herself. She defies tradition and her place in the family and proves that she's tough enough to do anything she sets her mind to.

Free-spirited Esmeralda saves poor Quasimodo's life and stands up for him at the Festival of Fools when Frollo's men start a riot. She defies Frollo's orders and cuts Quasimodo loose from the ropes that are binding him before using some clever misdirection to escape arrest. Then, because rescuing Quasimodo wasn't enough, Esmeralda saves the soldier Phoebus when he's struck by an arrow. The two of them fall in love, which Frollo probably hated, since he went after Esmeralda, and she was all, "Ew. No."

There are a lot of close calls in this movie, but everyone would be six feet under if it weren't for this kind-hearted and courageous woman. She has agency, and she uses it.

John Smith thinks that Pocahontas and her people are just a bunch of "filthy savages" (hi there, extremely offensive language); but she ends up teaching him a thing or two about a thing or two — like how to appreciate nature and get along in peace and harmony. She also defies the whole arranged marriage thing her dad and Kocoum are trying to rope her into, basically telling them to talk to the hand because it's not what she wants for her life. In the end, it's only with her help that these two once-opposing sides make peace, thanks to the curious, adventurous, courageous, and sometimes trouble-making Pocahontas.