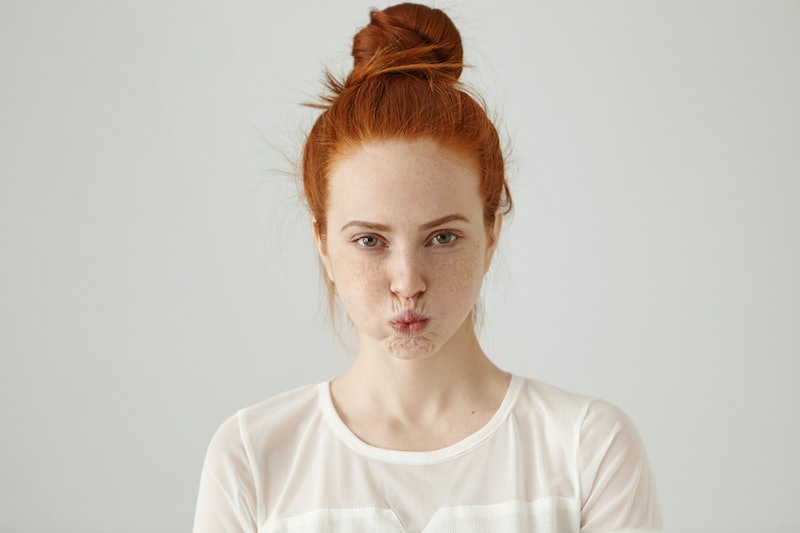 Most of us think about the joys, trials, and tribulations that come along with marriage before ever tying the knot. However, your relationship with your in-laws is something you might fail to ponder until after the wedding — which very well might leave you looking for signs that your in-laws are toxic. Are they truly a negative influence on your life, or are they just plain ol' pushy and a little too involved?

Personally, I think that relationships with your in-laws can be a little tricky. And, there's no doubt that the dynamic varies greatly from family to family. Some accept new spouses into their circle with open arms, while others view significant others as a threat — someone who's there to steal their beloved son or daughter away. Honestly, peruse a few Dr. Phil reruns, and I can almost guarantee that you'll come across some obnoxiously clingy mother who doesn't want to let her "baby boy" go.

If you're one of those people who gets along swimmingly with your in-laws, count your lucky stars. There are plenty of people out there who have more tense and strained relationships with their significant others' families, which undoubtedly causes a few issues around the Thanksgiving dinner table.

It's important to note, however, that there's a big difference between being toxic and just having different views and opinions. So, here are seven signs that your in-laws are indeed a harmful influence on your life — as well as what you can do if they are. Because faking sick every Thanksgiving likely isn't an option.

1. They try to turn you and your significant other against each other

If your in-laws turn everything into a horrible game of "he said, she said," it's a solid sign that they're bringing some negativity into your relationship with your significant other. Not to mention, it can cause some major and unnecessary confusion between the two of you.

How to Deal: Quite simply, you and your partner need to unite as a couple. Unfortunately, you can't control what your in-laws say. But, you can control how you react to those things. Take everything they spew at you with a grain of salt, and then have a frank conversation with your significant other about the seeds they planted in your head. And, most importantly, avoid flying off the handle until you hear what your partner has to say.

2. They insert themselves in your decisions as a couple

There are those in-laws that are a little too pushy and involved — but in a somewhat loving and endearing way. That can undoubtedly be a little annoying, but it's not detrimental. However, if your in-laws are involving themselves in your decisions as if their opinions should carry just as much weight as yours, then you have a problem. Whether you're discussing which home to purchase or when you should start having children, your in-laws contribute their two cents as if it should be the deciding vote in your decision-making process.

How to Deal: You have a few options in this case. If you want to take the more direct route, you and your partner should explain to your in-laws that, while you value their thoughts and opinions, this is a decision you feel just the two of you need to make. Or, if you want to try to maintain some peace, simply nod your head and smile while they share their view on the matter — and then make your own decisions anyway.

3. They intentionally make you feel bad

Your in-laws just might not like you. And, unfortunately, just because they're adults doesn't necessarily mean they'll be grown-up about it. Instead, they'll say and do things to hurt you and intentionally get under your skin.

How to Deal: There's no doubt that this situation can be tough to deal with. After all, who wants to spend time with someone who hurts their feelings? You could attempt to explain to your in-laws that their words and actions hurt your feelings. But, it's possible they'll think of you as overly sensitive. Unfortunately, your best bet here is to limit your interactions with your in-laws.

4. They don't respect your space

Your mother-in-law has made a habit of dropping by unannounced. Your father-in-law expects to spend every Friday evening with your significant other — even though that's one of the rare nights you actually have time for each other. In-laws that refuse to respect your space as a couple can definitely complicate things.

How to Deal: It's hard to tell somebody to stop coming around so much without seeming rude and standoffish yourself. But, if your in-laws are truly impeding on your time and space, it might be necessary. Explain that, while you love spending time with them, it's important for you and your partner to have time alone as well. To help soften the blow, coordinate a set date every week or month when you can all spend time together as a family.

Sometimes, it's nice to be treated like a kid again. I'll never complain about someone else cooking my meals or doing my laundry. But, if your in-laws are making big decisions for you or offering to cut your steak into tiny, bite-sized pieces, you've gone to a whole new level.

How to Deal: Draw the line. It might seem harsh, but it's absolutely necessary. As soon as your mother or father-in-law starts to interact with you as if you're still in diapers, state that you appreciate their help, but that you can handle that yourself. After a few times of standing up for yourself, they should start to back off a bit.

6. They freeze you out

There are all sorts of terrible in-laws out there. But, the ones who behave as if you don't actually exist have to be among the worst. They talk about you as if you aren't there. They completely ignore you at family dinners. Honestly, I'd almost prefer if someone was blatantly rude, rather than treating me as if I'm totally nonexistent.

How to Deal: Have a one-on-one conversation with your in-laws about the circumstances. It's difficult for them to ignore you when it's just you in front of them. If nothing improves after that conversation, simply explain that you won't be coming around as much anymore. There's no point in dedicating your time to being ignored and mistreated.

7. They gossip about you when you aren't there

You've heard through the grapevine that your in-laws are badmouthing you to anyone who will listen — they're gossiping about you to other family members, friends, neighbors, and even their mailman. Not only is it mean and frustrating, it's downright childish.

How to Deal: First things first, you need to let your in-laws know that you're aware of the things they've said about you. Explain that you don't believe you've done anything to deserve that disrespect, and go ahead and ask if you've indeed done something to upset them. End the conversation by requesting that they come directly to you the next time they have an issue — rather than blanketing the world with gossip and rumors.