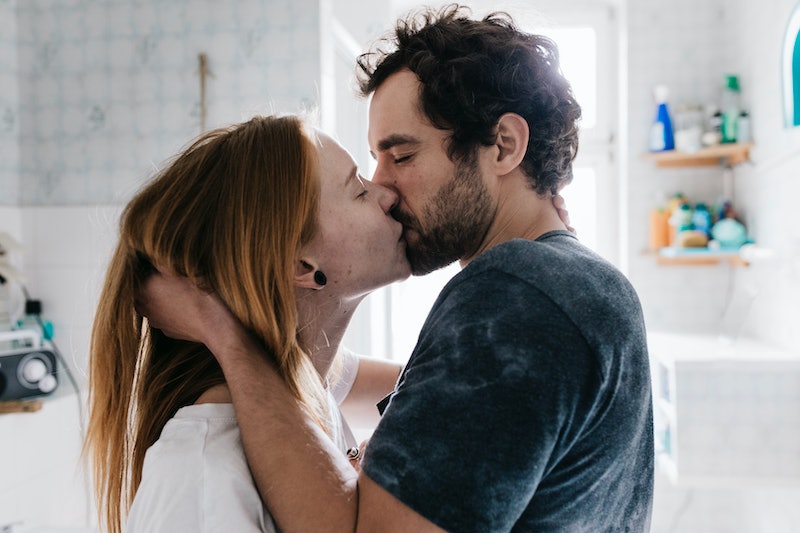 It doesn't matter whether you were a teenager when you started having sex (like the average American woman, who first has sex at age 17.4); a sexual late bloomer (like myself) who didn't choose to lose your virginity until after you could legally drink; or someone who waited to start having sex until after you were married — being a newly sexually active woman comes with a lot of surprises. Especially considering that everyone loves to tell virgin females exactly what beginner sex is like for women.

Obviously, this is one arena where you can't really make sweeping assertions: sex is different for everyone, so what sex felt like for me when I first started having it probably doesn't match up perfectly to what sex felt like for you when you started having it, or what most women experience when they start having sex. On top of that, I've mainly engaged in heterosexual sex, so what sex was like for me in the beginning is naturally going to be a bit different than what beginner sex is like for women who only have sex with other women. That said, since we're mostly working with the same parts, chances are there are at least a few similarities between what being a newly sexually active woman was like for me and what beginner sex is like for women in general. Here are 13 of the biggest things I noticed.

1. Having Sex For The First Time Sometimes Hurts Like Hell

I'm sure this isn't the case for every woman out there; but it definitely was true for me and for pretty much every woman I know whose first time was with a man. In fact, my ex had such a difficult time getting it in that first time, despite the fact that we'd been messing around down there for weeks, that I actually had to enlist the help of gravity and get on top when I lost my virginity to him. Of course, the first guy I had sex with was, ahem, hung; so I'm sure that was part of the reason my first time was painful. But I feel like losing my virginity would have hurt regardless.

2. ...And The Second Time Will Probably Hurt, Too

Again, I'm sure this isn't true for all women, and I'm sure it would have been less of an issue for me if my ex had a smaller penis and had placed more value on foreplay. But for me, sex wasn't just painful that first time. Honestly, having sex hurt me quite a bit for the first few months after I started having it. Even now, though I've been having sex for years, sex still hurts if I'm not adequately warmed up, my partner is well-endowed, or I've been having so much sex on the regular that all my lady bits are sore.

4. You Realize That Sex Is Extremely Wet

If you've ever had sex, then you already know what I'm talking about. There's just so many fluids down there, it's honestly kind of ridiculous.

At one point, when my ex and I first started having sex with each other, I remember him exclaiming, "It's like raging rivers down there!" He was not wrong.

5. Every Position Is Exciting (At First)

6. You Might Feel That Sex Can Be A Feminist Act

Before I became sexually active, I didn't fully realize that sex can be a feminist act — but after I started, I realized how true this is. Everything about my first time — from when it happened, to who it happened with, to where it happened — was 100 percent decided by me. I don't think I'd ever felt in more control of my own body than I did when I finally chose to trust someone else with it. I know not everyone's sexual career starts like this, but for those of us who did have this experience, it can be really illuminating.

7. You Realize Being A Virgin Is Only A Big Deal To Virgins

There may have been a point before you started having sex when you felt at least a little bit embarrassed of your virginity. After you start having sex, though, it doesn't take you long to realize that being a virgin is only a big deal to virgins. And, personally, I don't think anyone should feel weird about the amount of time it takes them to swipe their vcard.

Unfortunately, sex is one of the biggest reasons women get UTIs. I got the worst UTI of my life shortly after I became sexually active, and it made me seriously angry at my urethra for a little bit. Fortunately, though, after that first UTI, I learned that getting a UTI from having sex is not an inevitability. It's too bad I had to essentially pee daggers for three days to learn that lesson, but whatever.

I'm by no means suggesting that having sex should be how a woman gains confidence in herself. That said, having sex made me feel in charge of my body in a way I never had before. If you were anything like me, then you probably strutted around smiling from ear to ear and winking at yourself in every passing mirror the day after you started having sex.

10. You May Think Everyone Can Tell You Had Sex Just By Looking At You

After I started having sex, I felt like it was written all over me — and I don't think I'm the only woman who can admit to this. (Don't worry, they definitely can't).

11. It Takes A While To Figure Out How Your Partner Can Help You Orgasm

Being a sexual beginner makes you realize that orgasms aren't always a guarantee during sex, especially when you're first starting out. It wasn't until my ex and I had been having sex for a couple of months that I figured out that oral helped me orgasm (but when I did figure that out, it was pretty freaking awesome).

13. If You're Unable To Orgasm From Penetration Alone, You Might Freak Out About It At First

Like many women, I've never orgasmed from penetration alone. When I first started having sex, I thought this meant something was wrong with me, and I don't think I'm the only woman who's felt this way after beginning to have heterosexual sex.

Fortunately, as you probably already know, not orgasming from penetration doesn't mean you aren't capable of getting your mind blown during sex, that anything is wrong with you, that you're bad at sex, or that you're doing anything wrong. There are so many different ways to enjoy having sex — and one of the best things about starting to have sex is knowing that you're just at the beginning of discovering them all.

More like this
My Partner Wants Me To Wear A Diaper During Sex. Help!
By Sophia Benoit
12 Active Date Ideas That'll Get You & Your Boo Outside
By Lexi Inks
12 Aphrodisiac Desserts To Spice Up Your Valentine’s Day
By Kaitlyn Wylde
18 Hinge Prompt Answers To Try If You’re Looking For Something Casual
By Lexi Inks
Get Even More From Bustle — Sign Up For The Newsletter
From hair trends to relationship advice, our daily newsletter has everything you need to sound like a person who’s on TikTok, even if you aren’t.