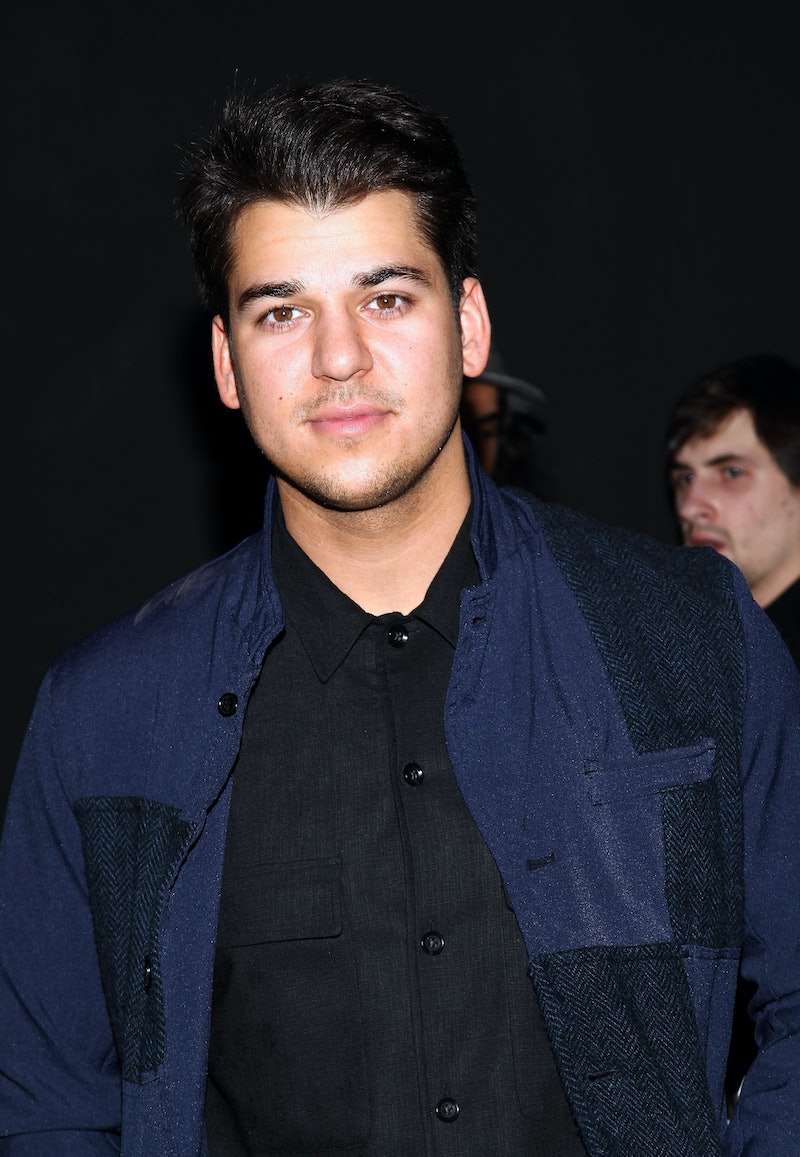 After having an album listening party and fashion show at Madison Square Garden, Kanye West officially dropped his album early on Sunday morning. The Life of Pablo is streaming exclusively on TIDAL. With 18 tracks, West covers plenty of topics, including those controversial lyrics about Taylor Swift, which have already garnered backlash. Swift isn't the only one to get a shoutout on TLOP. West's brother-in-law Rob Kardashian is mentioned on a track called "Highlights." West raps,

Blac Chyna f*cking Rob, help them with the weightI wish my trainer would tell me what I overate

Wow, there's a lot going on here. Not only does West confirm that Blac Chyna and Rob Kardashian are officially together, but he acknowledges Rob's struggle with his weight and subsequent journey to get healthy. The Daily Mail views the lyrics as West implying that Rob sleeping with Chyna is his main form of exercise — or "sexercise," as they call it. Although it may seem like he's blowing up Rob's spot, it appears that the youngest Kardashian is surprisingly OK with the shoutout and doesn't view it as a diss at all.

Ever since West began promoting TLOP , Rob has been cheering him on via Twitter and Instagram. Here's an assortment of evidence to prove there's no bad blood between these brother-in-laws.

Exhibit A: This Screenshot

Admittedly, I don't understand Rob's usage of the kayak emoji. But he seems to be saying it's all smooth sailing and he's supporting West's latest album.

Exhibit B: A Display Of Brotherly Love

Forget the fact that they're in-laws. Rob just calls West his brother. He's a big fan of West's t-shirt, which not only honors his late mother Donda, but Robert Kardashian as well. It's definitely a touching tribute.

Exhibit C: All Of These Tweets

Although West posted this tweet after talking about Anna Wintour being at his show, Rob viewed it as a shoutout to himself. Once again, he calls West his brother.

Rob also encouraged everyone to tune in for West's Saturday Night Live performance.

On top of that, he tweeted lyrics and song titles from the album.

The conclusion here? Rob does not seem to mind that he got an explicit shoutout on The Life of Pablo. From the looks of it, he's loving every minute of the attention. If anything, he's TLOP's biggest fan.