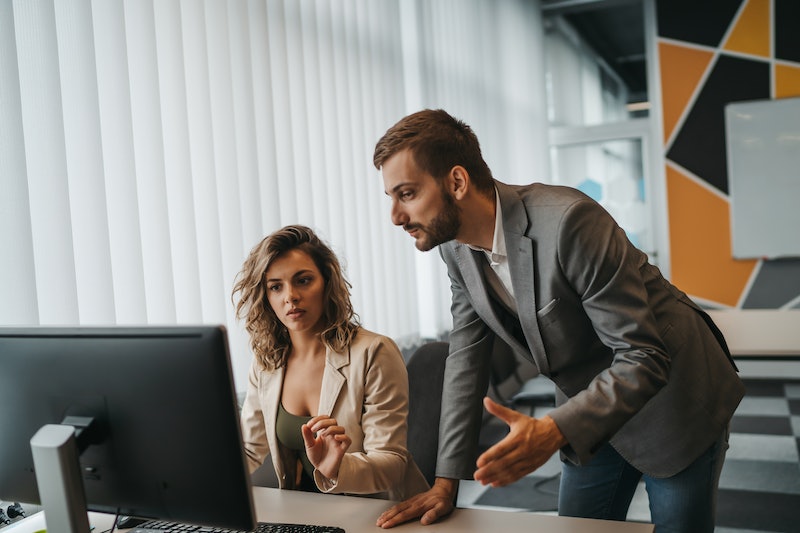 bojanstory/E+/Getty Images
By Suzannah Weiss
May 30, 2016

Our society still considers a woman in any leadership position unusual, and as a consequence, there are all sorts of comments women bosses are sick of hearing. Many of them are the same patronizing things women hear in the workplace all the time: "Are you the secretary?" "Are you sure you have the energy to take on that assignment?" Others stem from confusion that a woman could be in such a high-up position or the assumption that she must have either been very fortunate or "slept her way to the top" (which is really not a thing, you guys). Wherever these statements come from, though, using them toward your boss or any other woman in charge of a company or team not only undermines women, but also perpetuates problematic gender roles and inaccurate stereotypes.

Whether you realize it or not, any woman you know in a leadership position at her company has probably faced an inordinate amount of sexism on her pathway there. Due to biases against female leaders, women make up only four percent of S&P 500 CEOs and 10 percent of CFOs, according to Bloomberg Rankings data. And the women who rise to the top despite these biases often face resistance and belittling assumptions.

Oh, and they also have to deal with a lot of ignorant comments. Here are some of them.

1. "How Do You Balance Work And Family?"

You meet men all the time who have both high-powered jobs and families, so maybe the problem isn't the demanding nature of being a working parent but the double-standard that leads to questions like this.

2. "How Have You Accomplished So Much?"

Women CEOs, managers, and VPs have accomplished what they have through hard work and talent, not through some stroke of luck that allowed them to get ahead despite inferior abilities.

As Gloria Steinem said, "if women could sleep their way to the top, there would be a lot more women at the top." Why is it difficult to believe that a woman deserves to be in charge?

There are so many things closer to the top of a boss's mind than what she wears to work. Like, you know, what she does while she's wearing it.

84 percent of women in the tech industry have been told this, according to the survey Elephant in the Valley . That's bananas! There's no way they're all too aggressive. Maybe our culture is just too quick to label women as "aggressive."

Liz Klinger, CEO of the sex toy company Lioness, tells Bustle over email that people frequently ask her “who is the CEO?” while turning to a man in the group, even though her company makes products for women. In fact, I've heard story after story of people asking women if they could speak to an engineer or manager, not realizing they already were. Check your assumptions, people: Just because the employee in front of you is a woman doesn't mean she's a secretary.

Women bosses might intimidate men... if those men are sexist and believe they need to be above women professionally. Sonya Davis, founder and CEO of the dating app Neqtr, often hears, "Your leadership style and passion could intimidate people. You might want to tone it down," which reflects the assumption that "women need to be submissive and intense passion is bad." Women bosses shouldn't need to play down their success to get a date, and often, they don't — because many actually find it attractive.

Unfortunately, even women in the highest ranks at their companies aren't exempt from sexual harassment. The only difference is that they also have to hear people's power-play fantasies. In addition to being unprofessional and violating, this statement assumes being cute and being a boss are contradictory. BuzzyBooth founder Jolina Li has heard this outright: "I have people telling me that I'm too 'cute' to be a CEO," she says.

Women bosses also aren't exempt from being interrupted and spoken over by male coworkers at meetings, no matter how high above them they are. The idea that women's ideas matter less is so pervasive that many people don't even realize they're doing it.

People often assume a woman lacks the background to be where she is, leading to confusion at her success. But it is in fact possible for a woman to have an MBA, technical training, or whatever you're assuming she lacks.

Klinger and Davis both get this one. Klinger said no man she has worked with has gotten that feedback, and Davis thinks it probably reflects the perception that women are serious about what they're doing are "scary."

12. "Your Biological Clock Is Ticking"

Davis said people often remind her to focus on her love life as well as her work life, or else she might miss her window of opportunity to get married and have kids. ​"Instead of asking me about my company, [people] just want to know who I'm dating and if there is a future," she said. "Because that is clearly more important than running a socially conscious startup that helps the world, right?"