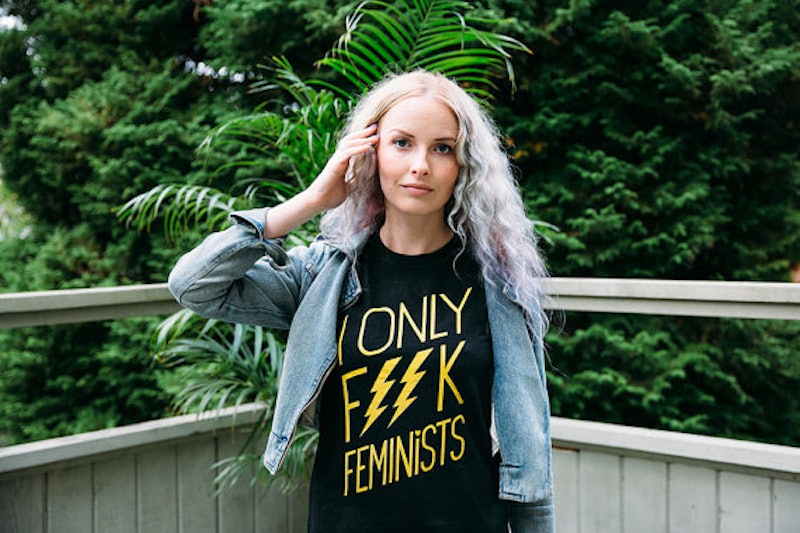 Not unlike many people, my appreciation for swear words goes pretty far back. In fact, I've pretty much liked to swear (when I could get away with it, of course) since I was a little girl. That said, over the years, I've discovered there is one major downside to being a woman who likes to cuss: there are so many ridiculous things people get wrong about women who swear.

If you're a woman who loves to swear, too, then you already know what I'm talking about. Lots of people will assume you only swear because you think it makes you look cool or because your vocabulary is lacking. Others will automatically deem you unprofessional or disrespectful, even if you abstain from swearing in front of children or at work. On top of that, you'll be told with shocking frequency that being a woman and loving to swear ought to be mutually exclusive.

Despite all the things people get wrong about women who swear, though, I still think cursing is so much fun. I have no doubt that my fascination with swear words grew partially from the fact that I, like most youngsters, was strictly forbidden to use even the lower-level swears (like crap or butt head) when I was a kid. But there's more to it than that. For me personally, being a woman who swears a lot can feel like a feminist act. Plus, I've always loved words, and the linguistics of cussing is actually really fascinating to me. Swears have their own histories, their meanings often evolve over time, and it's not uncommon to be well into adulthood and still learning new swear words every day.

Basically, I love being a woman who swears a lot. If you do too, then read on. Here are 11 things people get wrong about women who swear a lot.

1. That We're Not Well-Read

Oy, this one really bugs me. I don't know why people assume women who love to swear don't also love to read, because every woman I know who loves to swear also loves to read. Not to mention the fact that so many well-educated women, like Helen Mirren, cuss like sailors. Additionally, several wildly successful female authors (like Lena Dunham and J.K. Rowling) not only swear in their own lives — they use swear words in their work.

2. That We Swear Because We Have A Poor Vocabulary

If you've never heard, "Women who swear a lot only do it because they have no vocabulary," then count yourself lucky. I've heard this more times than I can count, and it's complete and total bullshit. I have a bachelor's degree in English, I financially support myself by writing things, I've read more books than I can even count — and I've still been told women only curse a lot if they have poor vocabularies.

Does my vocabulary have room to grow? Of course it does! But just because I like to swear doesn't mean I have a weak vocabulary. Rather, research suggests that fluent swearers actually have high verbal abilities. Like most women who swear, I understand the importance of variety. I've acquired my favorite swears over time, and I happen to enjoy incorporating them into my perfectly well-balanced, ever-growing vocab, thank you very much.

As a writer, I work almost exclusively from home. So, most days, I could speak in a never-ending string of swear words and no one would notice. However, I do still have to talk to editors and interviewees pretty often, and the last thing I'd ever want to do is make them uncomfortable. So although I love to swear, I never cuss in front of anyone I'm working with, or for, unless they make it clear that they're cool with it.

There are so many things wrong with this assumption that I'm not even certain where to begin. For starters, men don't own swearing. There is nothing inherently masculine about swear words. They are words. They belong to everyone.

Secondly, the fact that women can't swear without someone making it about gender roles only perpetuates the same gender bias that makes it OK for men to cuss while shaming women who do the same. Thirdly, f*ck gender roles. Gender is way too fun to play with, and way too fluid for most people, to qualify as an adequate reason for not doing something.

5. That We Only Swear To Get Attention

I don't know a single woman who swears just to get attention. In fact, thanks to the rampant street harassment most women have to deal with, I'd argue that the majority of women would generally prefer to get less attention than they do.

Personally, I've never thought cussing would magically make me stand out or appear sexier or more confident or tough, either. But if you're a woman who loves to swear, some people are going to think you only developed Sailor Mouth because you're an attention-seeker.

6. That We're Not Classy

First of all, no one should get to tell grown women whether or not we're classy enough; we get to decide that for ourselves. Also, Beyonce swears frequently in her music, and no one can pretend she isn't classy.

Moreover, studies have actually shown that women (and just people in general) who curse a lot are generally more confident, more attractive, and less stressed out than people who keep it clean. Since being confident enough to own your sh*t is kind of the epitome of class, saying women who curse a lot aren't classy is literally scientifically inaccurate.

8. That We Can't Control Ourselves

Just because swearing brings a woman infinite joy doesn't mean she's incapable of temporarily turning off her potty mouth when she knows swearing would be ill-advised.

When I'm around my darling nieces, I never swear. (OK, maybe I have once, but it was only because I stubbed my toe super hard.) In fact, when I'm in the same room as those little queens, I don't even want to swear, because swearing is just too adult for them to handle right now. Plus, I know cussing in front of any child is probably going to make their parents feel disrespected, and I don't want to be the reason anyone feels disrespected.

9. That We Have Bad Manners

I swear all the f*cking time, and I have excellent manners. I say "please," "thank you," and "excuse me" whenever it's appropriate to do so. I open doors for people when doing so won't make things weird. When someone comes over to my place, I offer them snacks and drinks almost immediately. If I see a parent and their child step into my subway car, and no seats are vacant, I give mine away.

I don't know where the stereotype that women who love to cuss are rude came from. Every woman I know who curses like a sailor is also incredibly polite, giving, and kind; whereas some of the rudest women I've ever had the misfortune of interacting with were overtly proud of the fact that they don't swear.

OK, so I happen to be one of those women who loves to swear and also likes to drink beer, whiskey, mimosas, and blackberry wine. However, just because I curse a lot doesn't mean I drink a lot. I'm pretty sure I will always prefer weed to booze, I can't drink more than a few beers in one sitting, and I've gone through phases where I didn't drink for months.

I know plenty of women who love to swear but only drink socially. I know women who swear all the time and drink almost daily, too. But that doesn't mean all women who swear also drink, and claiming otherwise is an annoying over-generalization.

11. That We Think People Who Don't Swear Are Lame

Some of my favorite people almost never swear, and I don't think they're lame in the slightest. I love them! Alternatively, I've known more than one person who cursed as much as I do, but they were super unpleasant to be around.

As long as my non-swearing friends and family don't start telling me what words I can or can't use in their presence, the fact that they don't curse is never going to make me think less of them. And if you're a woman who loves to swear, too, I bet you feel the same way.