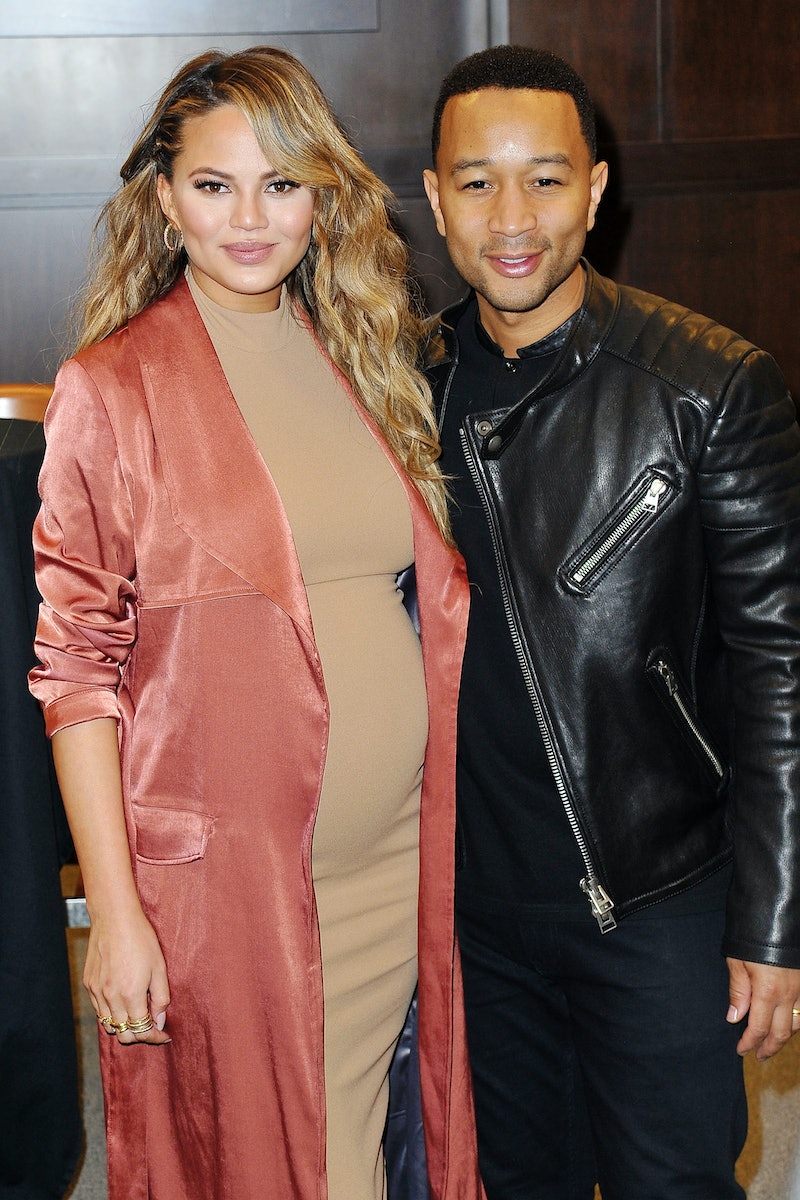 As her 1.3 million Twitter followers know, Chrissy Teigen doesn't shy away from honesty. It's one of the most admirable traits about the supermodel, who shuts down trolls and speaks out about important issues as if it's her second job. When the 30-year-old announced she and husband John Legend are expecting their first child, the mom-to-be was super honest about the path to get there. She revealed that she used in vitro fertilization to get pregnant and recently gave even more details about that process. Talking to People, Teigen admitted she chose to have a daughter and here's why:

Honestly, I think her openness deserves a round of applause; it's refreshing. Although IVF treatment is common, it's not often something people (especially celebrities) discuss out in the open. In doing so, Teigen helps take stigma away from the subject and highlights the very real struggle some couples have when it comes to getting pregnant. She even recently revealed she was getting IVF shots in Zanzibar during her Sports Illustrated swimsuit shoot.

Plus, the reason she decided on a little girl is the sweetest. She went on to talk about the special bond that happens between fathers and daughters, gushing to People about "how soft they get, how mushy, and excited they get. It’s so cute." Considering Legend is open about feminism and equality, I think he'd set a great example for his baby.

It's clear that these two are beyond excited to be parents, and I can imagine their fans are equally anxious to meet Little Miss Legend. But for those who were rooting for a John Jr., don't give up hope yet. Teigen also added,

A boy will come along. We’ll get there too, so it’s not like we really have to pick. But he definitely is very lucky to have a little girl. And this girl is going to be so completely lucky to have John as her papa — it’s crazy!

If these future children take after their parents that means not only will they be skilled in the kitchen, photogenic, and musically talented, but they'll be honest and sincere too. While she emphasizes how lucky her future daughter will be to have Legend as a dad, I really do think Teigen will nail the whole mom thing. In my opinion, she's a body-positive queen, who doesn't take other people's B.S. and isn't afraid to stand up for herself. What better role model is there than that?

In case you're wondering just how Teigen knows that her husband will make a great dad, their dogs served as a trial run. She joked to People that he's super formal with their bulldog Putty and never speaks in baby talk. Still, when it comes to parenting human babies (not puppies), there's definitely an element of surprise. She explained,

I'm sure fans are just as excited to see these two tackle parenting. Knowing Teigen, she'll probably be 100-percent honest about the ups and downs of raising a newborn — and share all of the adventures in hilarious 140-characters-or-less tweets.

More like this
Chrissy Teigen Is Pregnant After Resuming IVF Following Her 2020 Pregnancy Loss
By Grace Wehniainen
Chrissy Teigen Announced Her Pregnancy In $520 Sheer Gucci Panties
By Dominique Norman
Jennifer Coolidge Needs 'Legally Blonde 3' To Happen So She Stops Getting Hot Dog Jokes
By Jake Viswanath
Who Is Camila Cabello Dating? She's Getting Cozy With Lox Club CEO Austin Kevitch
By Radhika Menon
Get Even More From Bustle — Sign Up For The Newsletter