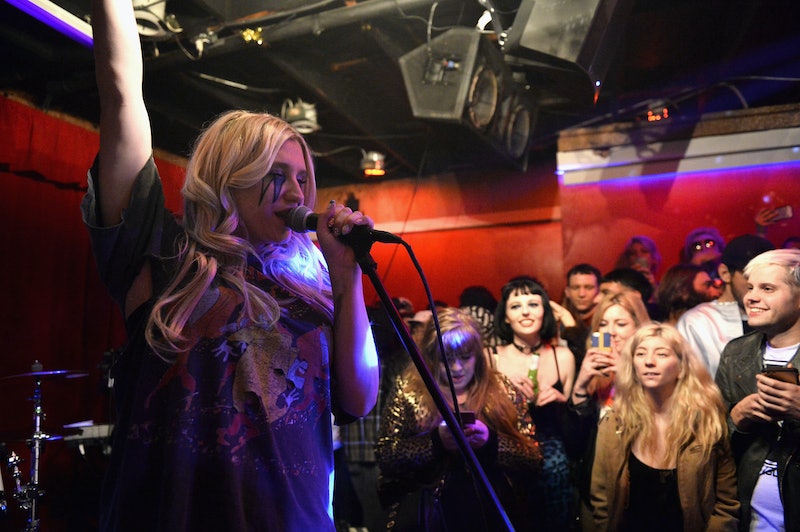 It's been five days since a New York City judge ruled that Kesha would not be able to legally break her contract with Sony music producer Dr. Luke (real name, Lukasz Gottwald), the man she accused in October 2014 of raping her when she was 18 years old and filed a lawsuit against for verbal and sexual abuse. (Dr. Luke has countersued both Kesha and her mother for defamation, as well as denied the allegations.) In the wake of the ruling, stars from Lena Dunham to Taylor Swift to Fiona Apple have come out in support of Kesha, sharing words of encouragement. But here's something I’ve been wondering ever since the decision about Kesha's contract was revealed: When will Kesha release new music?

Of course, nothing has been confirmed from the artist herself, but she has spoken out about her desire to make new music — so the possibility is there. She spoke with Entertainment Weekly exclusively in 2015 about how much she wants to record new music, and soon. “I’m dying to put out music, I’m like dying, literally,” the star explained. However, there was no info about when fans could expect a new album, or even new music.

So, what are the chances that she will be able to make new music either with or without Sony?

Though Kesha is effectively stuck in her contract with Sony, there have been a number of offers directed at her to make music outside of that contract. In addition to plenty of other musicians stepping up to support and speak out for the singer, there are big names who seem very interested in working with her. Fun. guitarist Jack Antonoff, for instance, tweeted at the singer that he didn’t “know what the legal specifics are,” but, if she wanted “to make something together & then leak it… [he’s] around.” That’s quite the offer.

But that wasn’t all. Antonoff wrote more in his next tweet, offering to also “just make something and wait on it,” and that it was a “standing offer from me and everyone I work with,” — meaning he’d be game to make music with Kesha whenever she is ready.

Though it's not clear if this would be entirely possible — Kesha's contract with Sony and Dr. Luke requires her to produce six more albums with the music company, and the judge in her case did rule she can't break it — it's still an offer that has been put out there for her. (Kesha's team did not immediately respond to Bustle’s request for comment on when the singer might record new music.)

And then, there is still the possibility that Kesha could record more music with Sony. After all, as PEOPLE pointed out, Sony has stated that they are willing to let Kesha record music without Dr. Luke as producer. In fact, it was part of the ruling — the judge in the case, Supreme Court Justice Shirley Kornreich, stated "[Kesha] doesn't have to work with [Gottwald]" in her ruling — but Kesha's lawyer, Mark Geragos, claimed that these promises were "illusory." He also argued that, even if the pop star does record more music with Sony, the concern now is that the company will not release or promote her music to the same degree as before.

In an affidavit submitted to the court by Kesha, Jim Urie, the former President and CEO of Universal Music Group Distribution, supported Geragos' claims, stating that "no mainstream distribution company will invest the money necessary to distribute songs for an artist who has fallen from the public eye, as is happening to Kesha at this very moment. Accordingly, if Kesha cannot immediately resume recording and having her music promoted, marketed, and distributed by a major label, her career is effectively over."

Unfortunately there are a number of legal roadblocks in Kesha's way to releasing new music in the manner that she wants. Hopefully, if Kesha does take Sony's invitation to record without Dr. Luke, we will be able to hear her work some time in the near future.

Kesha initially filed her suit against Dr. Luke in October 2014, detailing the alleged physical, sexual, and emotional abuse she claimed the producer had inflicted on her. In response, Luke Gottwald countersued both Kesha and her mother, and detailed in the complaint, "As part of the effort to get out of the Gottwald Recording Agreement, Kesha and Pebe have also orchestrated a campaign of publishing false and shocking accusations against Gottwald to extort Plaintiffs into letting Kesha out of the Gottwald Recording Agreement."

Friday, Judge Kornreich made her ruling against Kesha breaking her contract with Sony and with Gottwald, explaining her reasoning behind her verdict.

You’re asking the court to decimate a contract that was heavily negotiated and typical for the industry. My instinct is to do the commercially reasonable thing... [Sony] are willing to allow her to record without any involvement of Mr. Gottwald ... and there are papers from Mr. Gottwald that say he will agree to allow her to record without his involvement. [...] She doesn't have to work with him... Now the other side has come forward to say, 'We will let her record without Dr. Luke.' I don't understand your problem ... It's not in [the company's] best interest to not make money and not promote a recording artist.

In response to the ruling, Dr. Luke's attorney Christine Lepera released a statement to Rolling Stone detailing her agreement with the judge.

For her part, Kesha remained silent on the ruling until Tuesday, when she posted a picture to Instagram with a caption thanking her fans for their support.

On Wednesday, the "Tik Tok" singer also posted a statement to her personal Facebook page. Though she didn't make any mentions of recording new music, she thanked fans for their support, and commented that "this case has never been about a renegotiation of my record contract – it was never about getting a bigger, or a better deal."

You can read the entire thing here.

It's not clear what the specifics of Kesha's contract with Sony are, but, if working with someone outside of it is possible, I hope she takes Antonoff up on his offer to make new music. Because clearly the woman has some important things to say, and I’m convinced that the world would be better off having heard it.