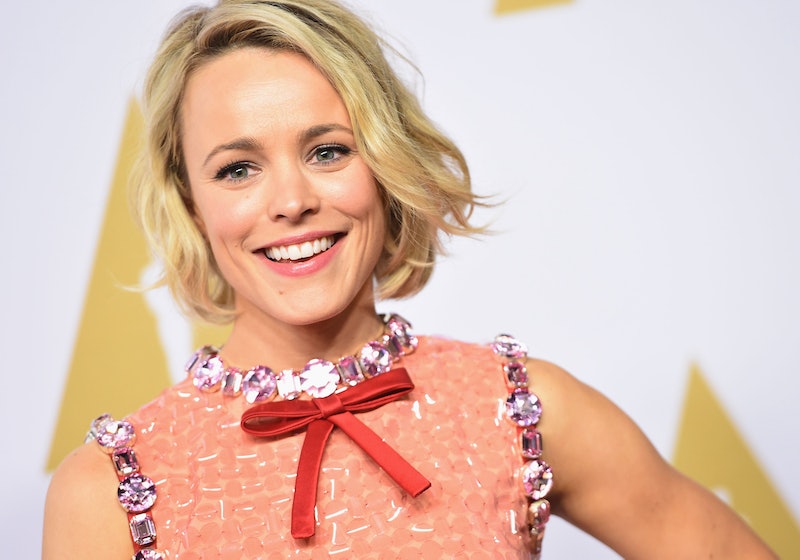 Rachel McAdams had landed herself a nomination for Best Supporting Actress at the 2016 Academy Awards. While I should be lauding her Oscar-nominated performance in Spotlight, I can't help but wonder who Rachel McAdams will bring to the Oscars? Of course, the actor's talent is what put her into the acting spotlight, but throughout her years of fame, a favorite hobby of her fans' is to gossip about who McAdams is dating. Since she will be attending the greatest film awards ceremony as a nominee this year, I'm excited to see who she will step out on the red carpet with.

From confirmed relationships, like with The Notebook costar Ryan Gosling and Midnight in Paris costar Michael Sheen, to rumored boyfriends, like Southpaw costar Jake Gyllenhaal and most recently True Detective costar Taylor Kitsch, McAdams' love life has always garnered massive attention. (There was even an unconfirmed rumor that she dated Game of Thrones' Kit Harington!) And if you noticed the pattern of McAdams dating costars, you aren't alone, though the Canadian actor told Glamour that she only dates costars after they work together. But as far as the cast of Spotlight goes, she seems to have strictly professional relationships with her male costars of John Slattery, Michael Keaton, Mark Ruffalo, Brian d'Arcy James, Liev Schreiber, and Billy Crudup. (Good lord, she really was outnumbered in this cast.)

The star pretty much always looks flawless on the red carpet and she has been continually accepting awards for Spotlight in style, like Best Ensemble Acting at the Critics' Choice Awards and Outstanding Performance by a Cast in a Motion Picture at the SAG Awards (pictured above). While McAdams is not expected to win the Best Supporting Actress Oscar come Sunday, Feb. 28, the film is also nominated for Best Picture and she has been having a stellar year career-wise, so it's only natural for us McAdams fans to wonder if she has anyone in her personal life to celebrate with.

Since the Kitsch-McAdams dating rumors that happened in the summer of 2015, the press has been pretty quiet on the actor's romantic life. Although neither star from HBO's True Detective Season 2 confirmed or denied their romance, there hasn't been much evidence — or gossip — since July. During the Kitsch rumors, McAdams did tell Entertainment Tonight that she thought the obsession over who she is dating because of her fame is odd. "[It’s the] weird, weird, bizarre, surreal side of it but I guess you just have to laugh at it at a certain point."

Because McAdams has not confirmed that she's dating Kitsch — or anyone else for that matter — to the media, it's difficult to tell if she's with him, single, or even dating someone else we don't know about. And if she does have a significant person in her private life, she is understandably keeping that information to herself since the actor notoriously keeps her personal life under wraps. But what about McAdams' big Oscar night? Who will she be bringing?

Well, considering that McAdams has brought the woman she portrayed in Spotlight — Boston Globe journalist Sasha Pfeiffer — to both the Golden Globes and the Critics' Choice Awards with her, it's a safe assumption to predict that McAdams will bring Pfeiffer to the 2016 Oscars as well.

I absolutely adore that McAdams has been bringing this intelligent and tenacious woman with her to celebrate the success of their film. And I say "their" film because Pfeiffer and the rest of the Boston Globe Spotlight team played a huge part in the development and creation of the Oscar-nominated movie, according to Variety. Honestly, who better to be by your side than the woman you are portraying when you are honored by Hollywood's most prestigious awards ceremony?

While McAdams has not publicly confirmed any details of her personal life, or that she'll be bringing Pfeiffer to the Academy Awards, I'm crossing my fingers to see these two talented women walk another red carpet together.