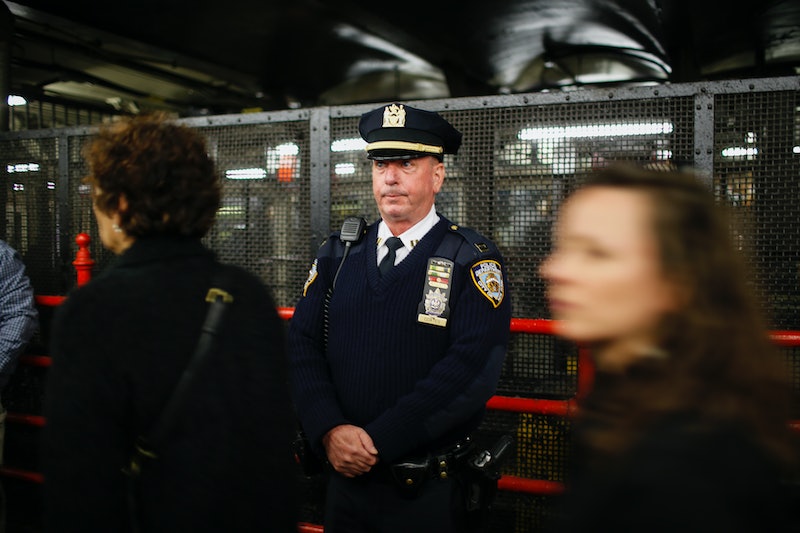 After the devastating attacks on Belgium's airport and metro station Tuesday — which resulted in the deaths of over two dozen people and left over 170 injured — it's no surprise that both liberals and conservatives have taken to various social media platforms to express their support and sympathy for Belgium during this horrible time. But what has been surprising to me, as someone who recently moved to New York City from Missouri, is just how different the post-terror atmosphere has been here compared to my experiences living somewhere conservative after a terrorist attack.

To be fair, no matter the political climate of any place that I've lived, liberals and conservatives alike have initially responded to terror with sympathy and a longing for justice. That said, in my experience, there's no denying that the collective psyche of fear existing in predominately conservative regions post-terror is palpable — and it's terrifying. Fortunately, there are lots of progressive living in conservative cultures who don't react to ISIS' acts of terror with the fear and Islamophobia that I was expecting to see filling up my news feed after yesterday's attacks, and there are exceptions to every observation.

Here are just a few examples of how I've noticed a region's political culture affects its post-terror response.

In my overwhelmingly conservative home state of Missouri, reports of terrorist attacks, or even terrorist threats, have typically been met first with genuine sympathy, fervent prayer, and fear. But here in NYC, which is undeniably at greater risk of being targeted by terrorism, fear doesn't even seem to be part of the equation.

Yesterday, when I went out to have dinner and drinks with a friend in the East Village, I did so fully prepared to overhear somber, angry, deeply concerned conversations about what the Brussels attack might mean for the U.S. — but I heard nothing of the sort. In fact, other than the Empire State Building going dark and the One World Trade Center lighting up in the wrong colors, it almost felt like no attack had taken place at all. New Yorkers, it seems to me, don't respond to terrorist attacks with the level of fear that I'm accustomed to witnessing post-terror attack.

2. People In Missouri Tend To Focus On Supporting Victims Of Terrorism Primarily Through Prayer

In my opinion, it is nothing but kind and noble for so many people living in conservative cultures to want to show their support and sympathy for victims of terror through prayer. As I'm sure you know, conservative cultures tend to be more religious, and for deeply religious people, prayers are powerful. So regardless of how my personal brand of Agnosticism makes me feel about prayer as a response to terrorism, the fact that conservatives all over the state of Missouri are taking the time to pray for Belgium can only be seen in a positive light to me.

That said, I would love to see more conservatives posting about how to help victims of terror in a more physical way. Which brings me to ...

3. People In NYC Seem To Focus More On How To Help Victims Of Terror In Tangible Ways

Admittedly, people living in rural Missouri usually have very little (if any) extra money to donate to the victims of terrorist attacks. Many Missourians are part of the lower economic tier, often living paycheck to paycheck and struggling just to take care of their families and pay their bills. That said, it's unsettling to me that the only posts I've seen from conservatives in Missouri about supporting victims of yesterday's attack have been spiritual, whereas people I know living in more progressive areas tend to focus on ways to support victims through disaster relief.

Yes, prayer is nice, and I understand that many conservatives believe in it's power — but it bothers me that the only post I saw yesterday about how to help those affected by the Brussels attacks in a tangible way was posted by a progressive friend of mine living in NYC.

When I was growing up in Missouri, terrorist attacks — no matter how far away they took place from the Midwest — almost always resulted in heated discussions about the "necessity of war," how increased gun control endangers civil liberties, and how the U.S. needs to work harder to "protect its borders." And a shameful amount of Islamophobic comments were also typically part of the conversation.

And though the above example is not from someone I know personally, it is from a conservative public figure, living in a conservative region, who is followed and admired by many conservative Missourians whom I know well. It's dangerous, it's racist, and while I'm sure liberal regions aren't 100 percent immune to it, I've only ever seen this level of Islamophobia carried out in conservative regions post-terrorism.

5. ... But Progressives Living In Conservative Cultures Aren't Afraid To Call Out Islamophobia, Either

In case you haven't heard about it yet, here's just a snippet of Republican presidential candidate Ted Cruz's upsetting response to yesterdays attacks:

"We need to secure the southern border to prevent terrorist infiltration. And we need to execute a coherent campaign to utterly destroy ISIS. The days of the United States voluntarily surrendering to the enemy to show how progressive and enlightened we are are at an end. Our country is at stake."

Obviously, this response is not only ridiculous, but also offensive. So I was very happy to see that even my friends who live in conservative regions aren't afraid to say so on social media.

Clearly, I know a lot of progressives living in conservative states. That said, I think it's worth noting that, regardless of region, no one seems to fully trust Western news sources after a terrorist attack. It's also encouraging to see that regional politics don't have the power to silence those rare liberal gems living in red states. Though there's no denying that conservative cultures tend to react to terrorist attacks with more alarm, I'm grateful that none of my conservative friends and family posted anything hateful or Islamophobic regarding the attack on Brussels. Furthermore, the fact that none of my progressive friends back home were afraid to speak out against Islamophobia further proves that, regardless of where you live, people are going to respond to terrorism by standing up for what they believe is right, and helping the victims in what ways they can.