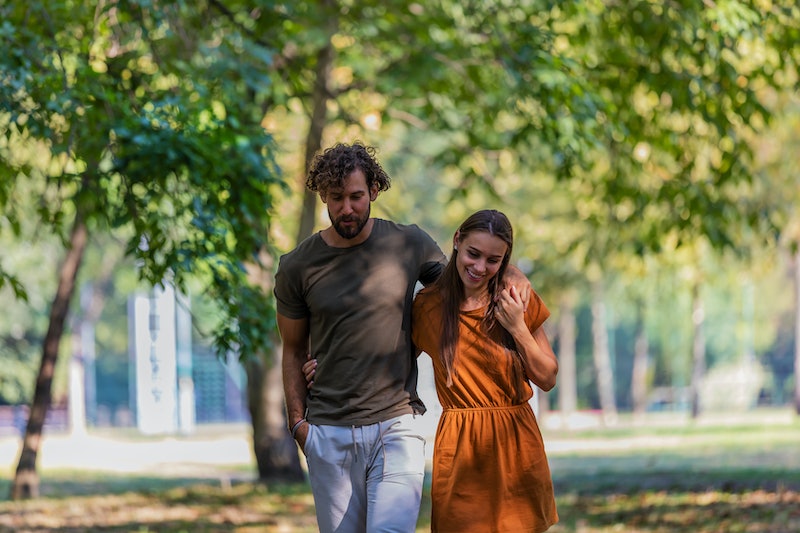 The sad fact of the matter is, the average woman will face more health complications over her lifetime than a man will. In part, this is because there are so many different ways the healthcare system fails to serve women in the same way it does men. For example, in the emergency room, a women's pain isn't even taken as seriously as men's. An average guy waits 49 minutes until he receives an analgesic for acute abdominal pain, but a woman ends up waiting a little over an hour. She is treated less urgently than her male counterpart until she proves she's actually in pain.

These are just small examples of how inherently sexist our healthcare system is, which is precisely why we need to start putting ourselves first when it comes to our health — and it wouldn't hurt to have men on our side. When Jeb Bush made that infamous, ignorant comment last year about the government not needing to spend $500 million on women's health issues, it became crystal clear just how little men understand about the gender inequality that exists in our country's healthcare system. As Dr. Jennifer Wider, women's health expert and medical adviser to Cosmopolitan, tells Bustle, "All too often [women] put themselves at the bottom of the totem pole — so having men in their lives who care about them and are aware of their health needs is invaluable."

Here are five things every man should know about women's health.

1. Women Are Much More Likely To Suffer From Mental Illness Than Men Are

Dr. Wider notes mental illness as one of the top issues in women's health that often goes unnoticed. Twice as many women suffer from clinical depression and anxiety as men do, and they often put up with more stress, whether it comes from managing their families or the enduring sexism that surrounds them. Women attempt suicide two to three times more than men do; women make up 85 percent of anorexia cases, and 65 percent of binge eating disorder diagnoses.

This gap can partly be explained by the fact that women are more likely to seek out treatment than men — since men are told to "suck it up," and therefore may be less likely to seek out help. Some experts also consider the hormonal shifts in women as a relevant factor, causing them to battle mental illness more than their male counterparts.

Even the mental illnesses that we often associate with men disproportionately affect women. Think PTSD and your mind probably went to men who have recently returned from overseas military duty. Although these individuals certainly do wrestle with PTSD, twice as many women have PTSD than men, mostly because they are more likely to face domestic and sexual abuse (which we'll get into more later).

It's important for everyone to understand the weight women carry around when it comes to their mental health. Not only could we receive better care, but we could be better understood by our friends and family. If they had more information under their belt, maybe men would be less inclined to call us "crazy" and "insane" — small words that pack a big punch.

2. Heart Disease Is The Leading Killer Of Women Everywhere

Heart attacks don't just happen to old dudes at the gym. Heart disease, better known as cardiovascular disease, is the number one cause of death for women around the world. Each year, more than 400,000 women in the United States die from it.

What may be the most useful piece of information for men to know is that the warning signs of a heart attack are often different for women. They might not even feel tightness in the chest; more common symptoms include jaw pain, nausea, shortness of breath, and sudden fatigue. In fact, it might just seem like indigestion. But if you're a guy who notices these signs in a woman you care about, get her to a hospital immediately.

One of the reasons heart disease in women often goes unnoticed is that the blockages build up evenly in their artery walls, as opposed to men, whose blockages form bigger, more visible clumps, making it easier for medical professionals to detect. Doctors only recently discovered that women might require different tests than men to see the condition of their coronary arteries. Additionally, doctors are not educating women enough on how to recognize the signs of a heart attack. As a result, on average, it takes a man 15 hours from the first sign of a heart attack to get himself to the office. It takes a woman over two days.

Recent studies have also shown that women who have endometriosis are three times more likely to suffer from cardiovascular disease than those who don't. Experts say there might be a genetic link between the two, and because they're not sure yet whether correctly treating endometriosis can reduce this risk, they plan to continue their research.

Men have a lot to gain by learning a little more about how the menstrual cycle works so that they can perhaps help their partner track her cycle and anticipate the symptoms. Dr. Dweck recommends that men download one of the many free apps to track the menstrual cycle, which they can use to keep an eye on their SO's schedule and help them get through the unpleasant symptoms. (With her consent, of course.) "One of the huge confusions regarding women to their male counterparts is the period, the cycle, PMS, cramps — basically anything... having to do with the menstrual cycle," Alyssa Dweck, M.D., gynecologist in New York and assistant clinical professor OBGYN at Mt. Sinai School of Medicine, tells Bustle. A little education would lessen that confusion.

On a larger scale, this will help men everywhere realize that periods are not something women should feel ashamed of. The more they witness a woman's everyday period struggles, the less they'll see it as mysterious or even gross, and they can join the global fight to improve menstrual hygiene for women around the world. In many developing countries, women have to use sticks and leaves as sanitary pads, leading to infection, or they're locked away in dark rooms while menstruating. It's a public health issue that deserves everyone's attention.

4. Birth Control Shouldn't Just Fall On The Shoulders Of Women

I can already see you fist pumping, ladies. Men who are having sex with women often know an astonishingly minuscule amount about female birth control, yet they are equal participants in the very sex for which we are taking it. It's not only frustrating — it's totally unfair. "Guys should realize that women are taking a lot of responsibility in their hands to prevent pregnancy," Dr. Dweck says.

Dr. Dweck thinks it's important for men to know that there are many, many good benefits of birth control (lowers risk of ovarian and uterine cancer, makes period more bearable, etc.), but that they also need to realize the risks that come along with hormonal methods of contraception. If women have a partner who is willing to help them make the right choice, they may even be able to avoid some risks of certain forms of contraception.

A year ago, Vice President Joe Biden called domestic violence a "public health epidemic" that needs to be addressed more closely by our country. In his speech at the National Conference on Health and Domestic Violence, he said, "According to the CDC and other research, the chronic stress from domestic violence is toxic to the body." Studies from the Center for Disease Control and Prevention (CDC) say that one third of all women will face domestic violence at some point in their lives, and these individuals are twice as more likely to suffer from depression and nine times more likely to develop a detrimental addiction to alcohol. And let's not forget the immediate physical damage women endure, such as bruises, cuts, sprains, and black eyes.

Similar consequences await women who have been sexually assaulted. The CDC says that nearly 1 in every 5 American women have been raped at least once; 44 percent have been subject to some other kind of sexual violence. A particularly disturbing statistic is that 78 percent of rape victims are assaulted before they turn 25. This means a vast amount of women have their whole lives to face the ramifications of sexual violence.

Women who have been sexually abused have a higher risk of contracting sexually transmitted diseases, including HIV. A study published by the Journal of the American Medical Association found that 57 percent of sexually abused women subsequently suffered from depression, anxiety, bipolar disorder, PTSD, or substance abuse. Women who have experienced multiple kinds of sexual violence were 89 percent more likely to battle these disorders. While it's not clear how much this phenomenon is linked to a preexisting mental illness in the woman, there is no question that rape tremendously exacerbates the likelihood that a person's mental health will plummet.

If men were more educated on these statistics and knew just how much women's health is impacted from gender-based violence, they might be more willing to advocate for the cause. They wouldn't possibly want this gory aftermath sitting on the shoulders of their partner, daughter, sister, mother, or friend. As Dr. Wider tells Bustle, "Education is clearly the key to helping men and women understand the needs of each other." Here's hoping the guys start listening.